Arnaud Chastaingt, the designer who updated the timepiece, is decidedly less recognizable, which is exactly how he likes things.

“I prefer when people speak about my creations than about me,” he said in a telephone interview from his office above the brand’s watch and fine jewelry boutique on Paris’s Place Vendôme.

In spite of his deliberately low profile, Mr. Chastaingt [pronounced shas-tawn, with equal emphasis on each syllable], 40, has worked on many noteworthy watches since he joined Chanel in 2013 as director of the brand’s Watchmaking Creation Studio. Some, like the J12, are revised takes on existing designs at the house, which first introduced watches in 1987.

Others are his conceptions, like the Boy.Friend, a subdued women’s tank style from 2015, and Monsieur de Chanel, which was introduced the following year as the brand’s first timepiece aimed at men.

Mr. Chastaingt’s watches often incorporate motifs that are emblematic of the brand, like a quilting detail that suggests a classic 2.55 handbag or a tweed pattern that might have appeared on one of Coco Chanel’s jackets. Those elements, while impossible to overlook, tend not to be showy. His touch is typically less emphatic than that of Chanel’s designers in other categories, where, say, a chain-strapped bag or bouclé women’s suit, even without a logo, has semiotic branding.

“All the creators who work for Chanel use the same vocabulary,” he said. “It’s true that we may have a different interpretation of these codes, of the vocabulary.”

“Our work,” he added, “is to find a good balance between the past and the future. The most dangerous thing for a designer is to look only in the past.”

Still, Mr. Chastaingt stressed that he looks well beyond Chanel’s archives for the inspiration of his designs. “When you’re a creator, you’re inspired by everything,” he said. “Sometimes designers say, ‘OK, I need to travel to visit all the museums.’ I’m not sure you’re inspired by that.”

“I think you’re inspired by une recontre,” he continued, using the French word for an encounter, “when you meet someone, when you walk in the street.” 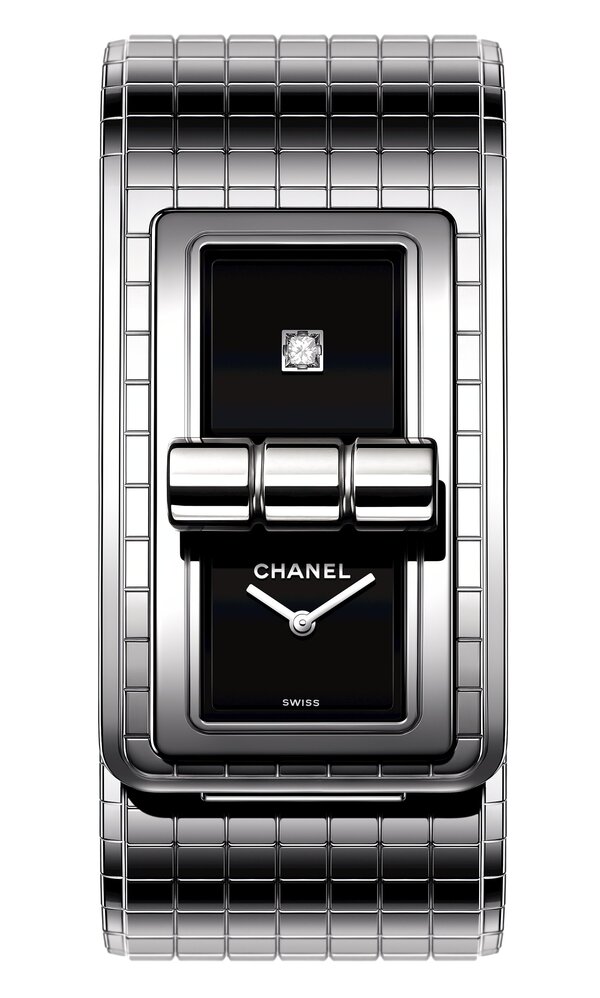 He drew the initial sketches for Code Coco — a series of 2017 timepieces whose strap and hardware suggest details of a classic Chanel bag — on a plane ride home from New York, where he had admired, through a Fifth Avenue store window, a stylish woman shopping on a brisk winter day. “When I saw this woman, I saw the Chanel femme d’affaires — businesswoman,” he said, translating for himself. “She was with a uniform where everything was perfect.”

He came up with a streamlined watch that’s essentially as much a bold bracelet as a timepiece. “She wants comfort, she wants something very graphic, she’s very sophisticated but she’s not too much,” he said, describing his perception of the woman and her presumed tastes.

The genesis of the Mademoiselle Privé Bouton collection of watches introduced earlier this year came from a box of unfinished vintage Chanel buttons that he picked up one weekend at the Porte de Vanves flea market in Paris. (Bouton is the French word for button.)

“I absolutely wanted the design not to be overdesigned or extravagant,” he said. “When I think about Chanel men — because there’s no Mr. Chanel — I think about the Duke of Westminster or Boy Capel. I was thinking of two words, which were discretion and pouissance — power.”

Mr. Chastaingt is probably best known for the revision of the J12, in part because he came out of the shadows last year to do some watch-related interviews to help publicize it. The task of reimagining a watch — altering details, as he did with the dial typeface of the J12 — is quite different, he said, than coming up with something new. “It’s much simpler to start from a blank page, to start from scratch, than to retouch the lines of an existing creation,” he said. “It’s true that in the first case, the act of creation is natural and instinctive for me: I have a conviction and I create my story and make it happen.

“If I’m in the second case, the exercise is maybe closer to what a surgeon does,” he continued. “It’s more structural.”

Mr. Chastaingt’s reticence is well-suited to designing luxury watches, which consumers buy in a different way than they do clothing or fashion accessories. “In watches, you are buying a product because it is seen and perceived as intrinsically valuable, so who designed it is less relevant,” said Luca Solca, an analyst at Bernstein.

Mr. Chastaingt feels his personality is well-suited to anonymity. “I’m rather discreet,” he said, sounding a bit uncomfortable. “It’s true that Chanel offers me the perfect balance between my work, to create, and the spotlight.”

Or, more specifically, avoiding the spotlight.

For all that it is low key, Mr. Chastaingt’s life in Paris, where he lives on the Left Bank with his wife and their 5-year old daughter, is a far cry from his upbringing in Coussac-Bonneval, a town with a population of less than 2,000 that is southwest of the French capital.

But, he said, his parents would regularly take him to Paris and abroad. Closer to home, Mr. Chastaingt and his family would frequently have Sunday lunches in Aubazine, a tiny town where, coincidentally, Ms. Chanel spent part of her childhood in an orphanage.

As a teenager, Mr. Chastaingt studied applied arts at a specialized high school about an hour’s drive from his hometown and then at the Strate School of Design in Sèvres, a suburb southwest of Paris, where he graduated with a degree in art and design in 2002. As part of his education, he drew all sorts of things, including handbags and, once, a watch.

The wide bangle timepiece with a liquid crystal display that he dreamed up was not, he admits in hindsight, especially practical. “It was absolutely a fantasme,” he said, using the French word for fantasy. “I think it was more a sculpture than a watch. but it doesn’t matter. That was a vision.”

Creating timepieces as a career wasn’t his plan. “I was convinced that the watch world was more in the mathematic world approach, like, it was very technical,” he said. “That’s why at the time I was absolutely not interested in this universe, because I had the idea that this was not my world and maybe not the world of creation.”

Nonetheless, he joined Cartier in 2003 and designed watches there for a decade. Like his subsequent work at Chanel, his creations from that period have an indelible but refined sense of branding.

The Délices de Cartier women’s watch he created, for example, was designed to suggest a wrapper being pulled off a piece of candy. Before noticing the discreet logo on the watch’s face, other details, like the bracelet links on many of its iterations, make the piece unmistakably Cartier.

“That’s never happened to me because I’m built like that,” he said. “Of course, I can never be a lawyer or a mathematician because I’m so bad with all those things. But creation, I think it’s my life.”