John and I bought the sofa together when he moved into my apartment on 14th Street. I say “together” even though he probably paid for it, as he did with most of our major purchases back then. He made four times what I did.

Our choice was the Beecroft, a tight-backed sofa with low arms and wooden legs capped with offset brass wheels and covered in a white denim slipcover. I didn’t just feel grown up buying this sofa, I felt sophisticated.

But it would last forever, I argued.

“There has to be something cheaper that we like just as much,” he said.

There wasn’t. Every other sofa we considered paled in comparison.

When we moved into a new apartment 13 years later, Miss Beecroft was still as sturdy as ever. But with an opportunity to remodel and redecorate, we decided she was due for a refresh. We took the slipcover and cushions to an upholsterer who remade them in a natural-colored linen. The result was stunning.

A few years later, our two new Chihuahua puppies, Sissy and Skeeter, quickly figured out how to pull the underside burlap from the wooden frame and create a little cave to hide in. Before long, all of the burlap had been ripped from its staples, which wasn’t a good look for Miss Bee. Sadly, things went downhill from there.

The linen slipcover didn’t prove as durable as the white denim, especially with two small dogs. Holes appeared, so we flipped the cushions. The other sides got holes. Then one of Miss Bee’s wooden legs came loose, developing a gruesome tilt.

I removed the leg altogether and propped up that end on a pair of books. I had our tailor patch the fabric with large squares until the patches themselves developed holes.

I handled that on my own because by then John had died, succumbing to a rare and aggressive cancer he’d learned he had only two years earlier. My mind being elsewhere, I figured I would flip the cushions so no one would notice, forgetting that both sides were in tatters.

I had a choice: Did I fix up Miss Bee, provider of comfort and anchor of my home and life with John? Or did I accept that she wasn’t worth fixing?

I don’t remember what made me decide to bite the bullet and order a new sofa, only that it happened fast. I knew what I wanted. It was just a matter of checking a few boxes online, entering my credit card number and clicking “Buy.”

All that was left was to arrange to have Miss Bee taken away. I called a junk removal service I liked because they would try to donate reusable items to charity or thrift shops. Miss Bee had a solid frame (not to mention a beautiful heart, as crazy as that sounds), so I hoped the right person could restore her to glory.

I prepared for the haulers’ arrival by moving a huge shelving unit near the front door to provide fuller access to the entry. I had recently bought the unit to hold sentimental objects I had accumulated with John over the years. Before I could move the shelves, I had to remove those objects: seashells from vacations, random pottery, wasps’ and hornets’ nests, incense holders, pitchers, jugs and vases.

I removed John’s grandmother’s metal salt-and-pepper shakers in the shape of two birds on a branch and her gold vase with ornate floral etching (the one John’s mother keeps hinting that she wants back). I removed the simple wooden box that holds a portion of John’s ashes. Made by my carpenter brother-in-law, the box also holds clippings from John’s hair and beard, a few trinkets and a small bag of our first dog’s ashes, because she was John’s favorite little girl.

I removed framed photos of John, the candles I light for him, the tiny Ganesh I bought for him in India, the incense he gave to me on our last Christmas together and the metal bird feet he bought for me many years ago and that I love so much.

After moving the shelf, I was ready. Or so I thought.

The October morning the haulers arrived, I explained that the sofa would fit through the doorway but only at a specific angle. I knew this because the movers who brought it in had an arduous time but finally figured it out.

These haulers weren’t so patient. They attempted to shove it through from different angles with no luck.

And then it happened.

Although I had moved the shelves and everything on them, I had left a small, porcelain deer head hanging on the wall near the door, a Christmas gift from John that was one of my most cherished possessions. The night before, I had considered moving it along with the rest of my keepsakes but then thought, “Nah, it won’t be in the way.”

As the haulers jostled and lifted, the sofa bumped the deer head and knocked it off.

“Uh oh,” the main guy said as I bounded from my chair. “Hold up,” he said to his partner as I fell to my knees and scooped up the deer head and left antler, which had broken off.

I cursed as I looked at the pieces in my hand, a wave of despair washing over me. Returning to my chair, I pulled out my phone.

“trying not to have a total emotional breakdown,” I texted to my friends Jessica and Rosella. “the sofa removers broke my john derian porcelain deer that john gave me for christmas.”

Meanwhile, the haulers gave up trying to figure out how to fit the sofa through the doorway. “I’m going to the truck to get a hammer,” the main guy said. Then, to me: “Do you have a hammer?”

I didn’t want them smashing up Miss Bee, but in my dazed state I retrieved a hammer for him. Within seconds, he was assaulting her back legs.

They did not give in quickly. The hardwood frame was solidly built. I sat in my chair and watched as these two men violently attacked Miss Bee.

“the guys are still trying to figure out how to squeeze the sofa through the door,” I typed to Jessica and Rosella.

“they’re literally bashing it to bits with a hammer”

Eventually, with much effort, the haulers succeeded in knocking off the back legs. Miss Bee had put up a fight, her legs cracking and splitting but not letting loose, even as chunks of wood flew across the living room.

I felt as if I had watched a family member being murdered. This wasn’t how it was supposed to happen. They were supposed to give her to someone who would lovingly restore her, not butcher her in my own apartment.

Once Miss Bee’s shattered legs were ripped away, the men were able to swiftly carry her through the doorway. Wiping away tears, I picked up her tattered seat cushions and carried them to the door, handing them to one of the haulers. I didn’t want those assassins coming back in.

I signed for their work. It didn’t occur to me to offer them a tip. And then, I lost it.

Jessica responded to my text first: “no, john not angry, it’s just the clumsy removal man. glue the deer. it’s ok. john loves you. go stand on your balcony and take some deep breaths, look up at the sky and tell him you love him so much. inhale some fresh air. everything is ok.”

Then Rosella: “yes everything she said. i’ll be home around 1:30 and i’ll come by for moral support and with some gorilla glue.”

The morning’s saga had unlocked a trove of mounting grief within me that wasn’t, of course, about the sofa. It was about Halloween, which John loved. It was about our anniversary, Nov. 6. It was about another Thanksgiving without John, and another birthday without him, and another Christmas, and then New Year’s Eve. 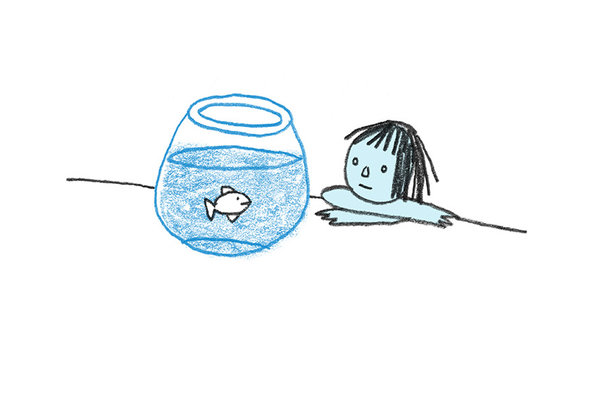 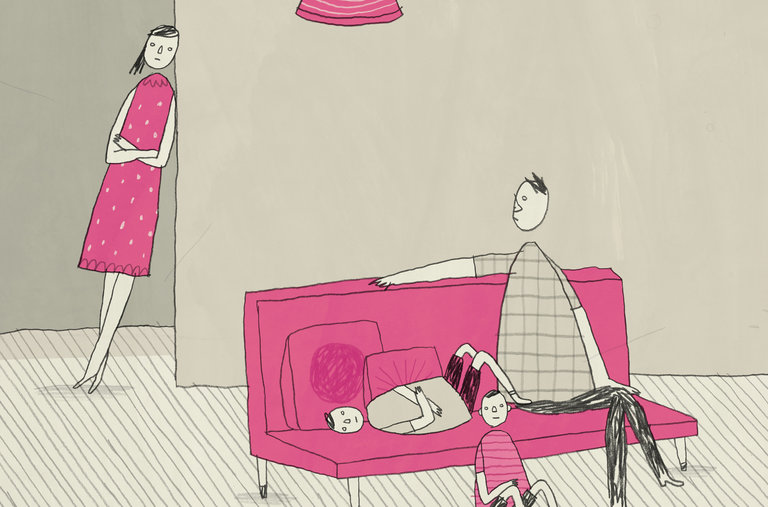 Out on my balcony, taking deep breaths of fresh autumn air, I realized I was dying of thirst, completely dehydrated from all the sobbing. So I poured a glass of ice water, trudged to my bedroom and collapsed into bed.

Grief and catharsis can take surprising forms. I hadn’t expected a sofa to play such a starring role in mine, but the murder of Miss Bee had provided a powerful — and beneficial — release.

Tomorrow would be another day, and a new year beckoned. Until then, Rosella (and her Gorilla Glue) were on the way.

Mike Rucker, vice president of the NBC News Brand Studio, is writing a memoir about love and loss.