While “Saturday Night Live” has long been known for its comedy, the 46th season of the NBC hit variety show made the case for it to also be looked at as a platform for high-fashion moments.

Celebrities and musicians like Anya Taylor-Joy, Dua Lipa, Dan Levy, Lil Nas X and others made appearances on the “SNL” stage this season, bringing their signature styles and making several impactful fashion moments that sometimes resonated with audiences more than the actual comedic skits.

Vintage fashion had a huge moment on the “SNL” stage this season. Grammy-winning singer Dua Lipa, for one, looked to a vintage Mugler black dress reminiscent of the designer’s 1981 “vampire dress” for her episode’s promotional videos, and then chose a vintage Azzedine Alaïa leopard print bustier from the designer’s 1991 fall collection for one of her performances. Golden Globe winner Anya Taylor-Joy also opted for vintage, with a 1960’s Courrèges mini dress from her stylist Law Roach’s archive for her episode’s promos.

Other stars used the “SNL” stage to make a statement, including Kid Cudi who wore a Virgil Abloh-designed floral dress to pay homage to Kurt Cobain and Megan Thee Stallion who used her performance to spotlight the police killing of Breonna Taylor.

Here, WWD looks at some of the best fashion moments from the 46th season of “Saturday Night Live.” Read on for more. 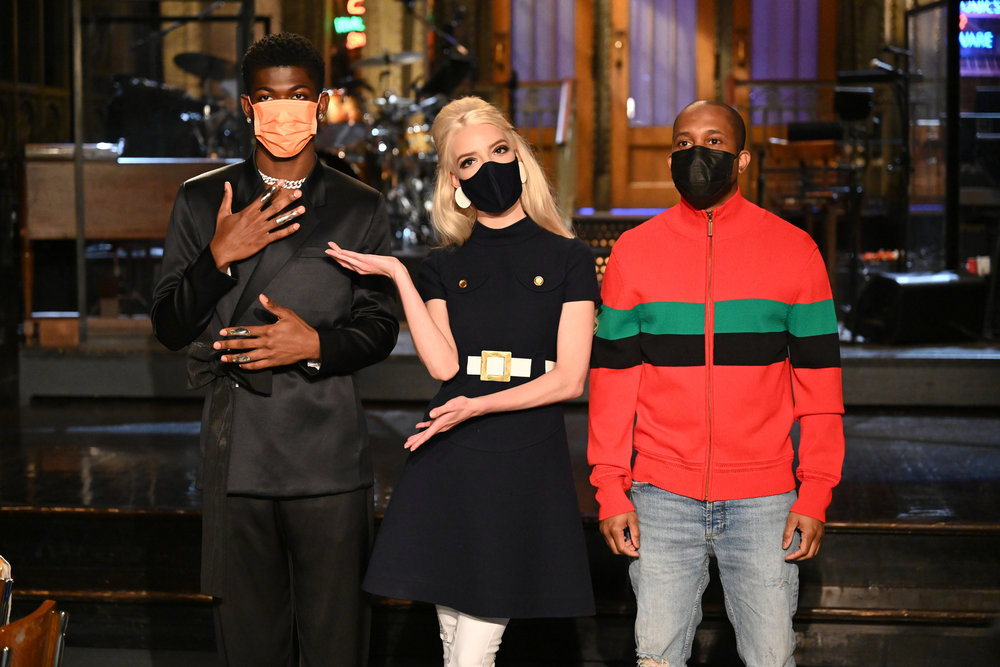 Anya Taylor-Joy has had a breakout year in both her acting career and the fashion world, winning a Golden Globe for her role in “The Queen’s Gambit” and having multiple standout fashion moments during the virtual awards season.

She continued her winning streak in the fashion world at the season 46 finale of “Saturday Night Live,” where she wore an array of designer looks curated by her stylist, Law Roach. Taylor-Joy started the show with her monologue while wearing a Peter Do white dress that featured an asymmetrical feather detailing. When introducing the episode’s musical performance, Lil Nas X, Taylor-Joy changed into a voluminous, fuchsia-colored dress from Molly Goddard’s spring 2022 ready-to-wear collection. She ended the show in a leopard print Brandon Maxwell dress and matching face mask.

In the promotional photos and videos for her episode, Taylor-Joy wore a 1960s Courrèges minidress from Roach’s archive, a gingham two-piece set from the Philosophy di Lorenzo spring 2021 rtw collection and a pink heart-detailed Carolina Herrera dress. 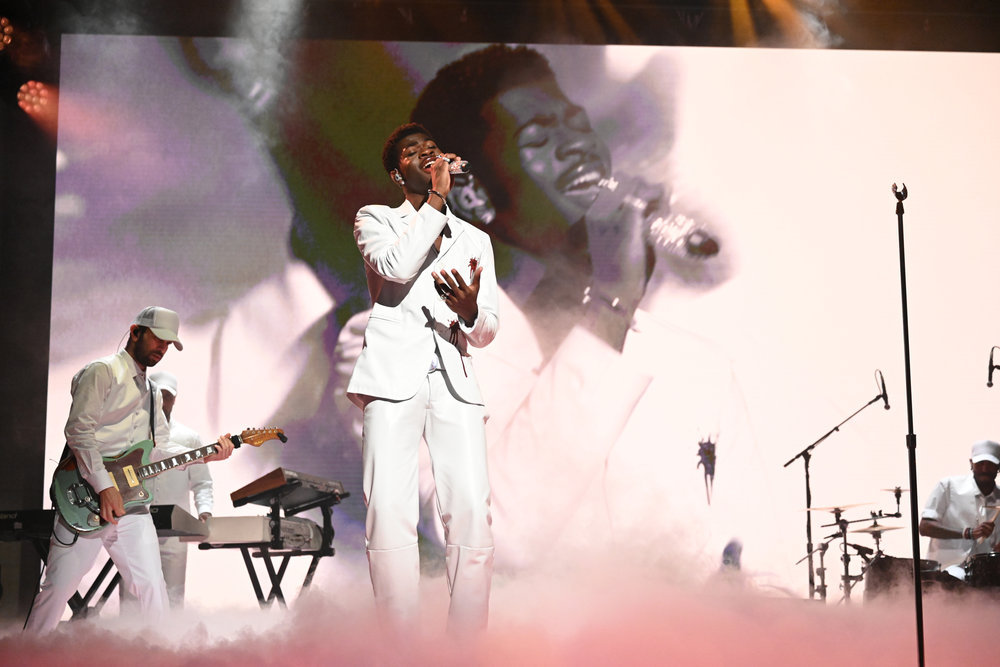 Lil Nas X rounded out Taylor-Joy’s high-fashion episode with a few of his own standout sartorial moments. The rapper’s first performance was of his song, “Montero (Call Me by Your Name), which initially caused a mixed reaction for its music video that used Satanic and biblical imagery. Lil Nas X looked to the music video for the performance and his on-stage costume, which consisted of black angel wings and leather pants with flame imagery.

The rapper made another statement when performing his song “Sun Goes Down” where he wore a tailored white suit featuring two bleeding bullet wounds from London-based Nigerian designer Mowaloha Ogunlesi’s spring 2020 collection. The designer had described the usage of the bullet wounds in her designs as a reflection of her “lived experience as a Black person,” on Instagram following the collection’s debut. 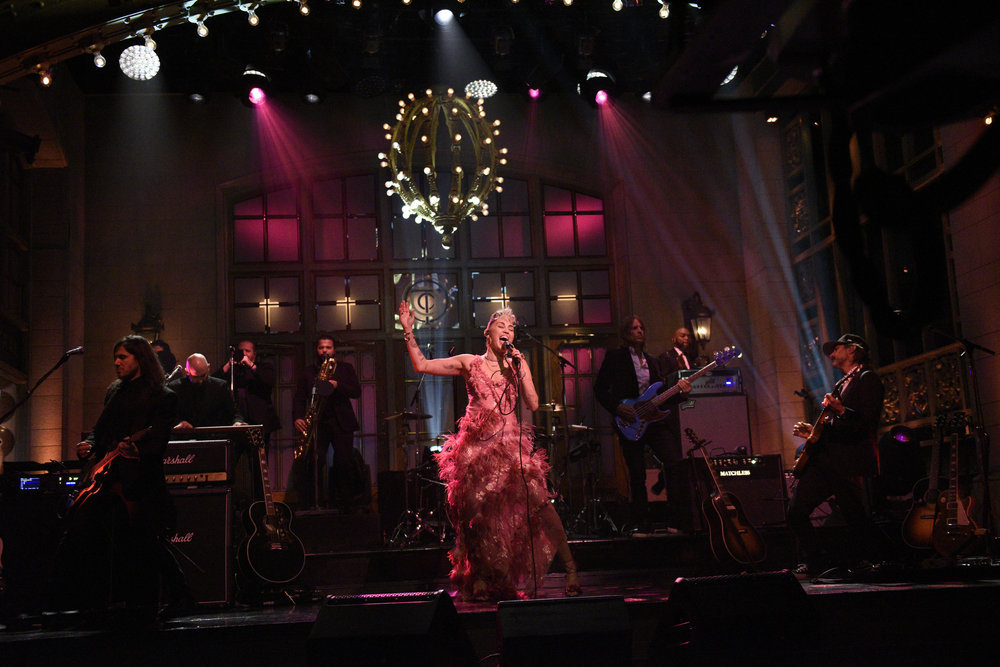 Miley Cyrus brought her rocker chic style to the “Saturday Night Live” penultimate episode, first appearing in the show’s opener to sing a rendition of Dolly Parton’s “Light of a Clear Blue Morning” while the show’s cast honored their mothers for Mother’s Day. For the performance, Cyrus chose a white oversize button down and torso-like black belt from Schiaparelli’s fall 2021 rtw collection. She later changed into a pink feathered dress to perform her song “Plastic Hearts.” 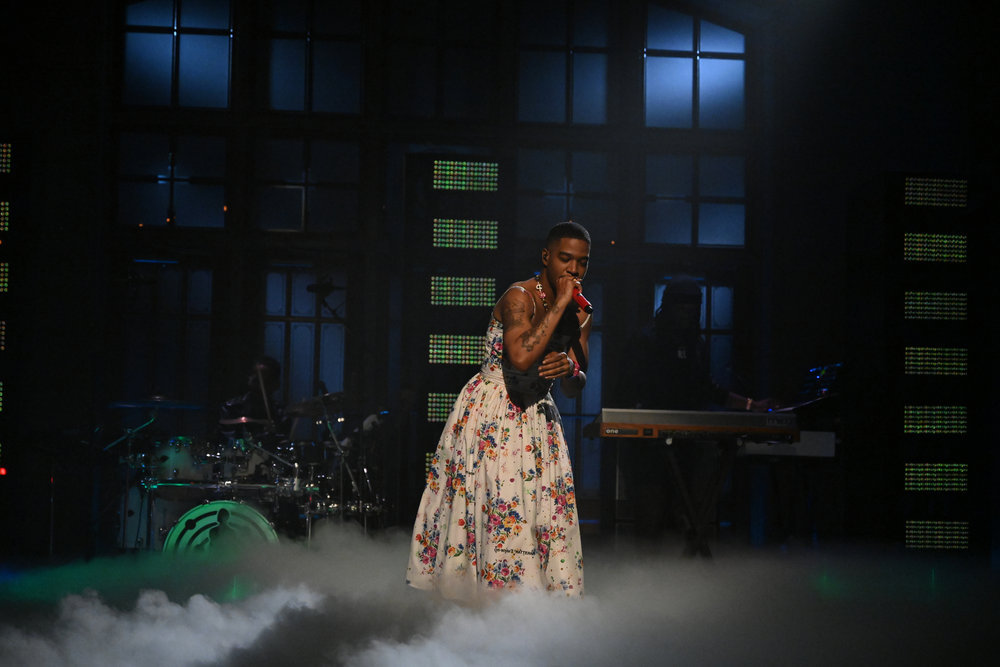 Kid Cudi performed this April with a sartorial moment that left an impression on the “Saturday Night Live” stage. The rapper performed his hit songs “Sad People” and “Tequila Shots,” while wearing a Virgil Abloh-custom designed Off White floral dress.

Following the performance, Kid Cudi stated he wore the dress to pay homage to the late Nirvana frontman, Kurt Cobain, who wore a similar floral dress on the cover of Face magazine in 1993. The rapper also stated after the show that he is collaborating with Abloh on an Off-White fashion collection, which will include his “SNL” floral dress. 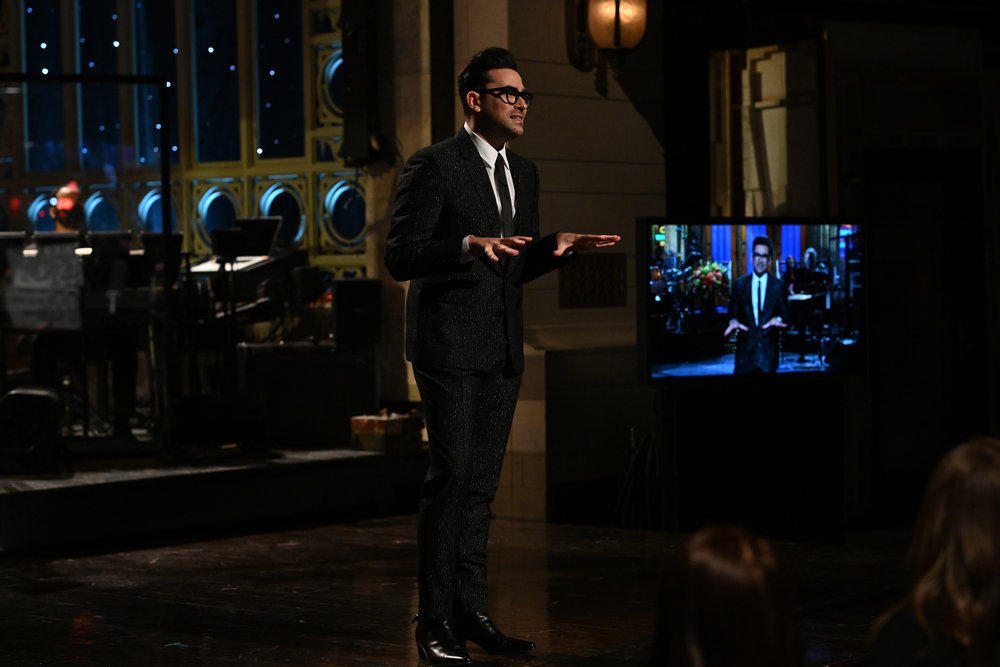 Dan Levy was one of the most fashionable red carpet stars this awards season and he brought his signature style over to his “SNL” episode.

Levy continued the awards season trend of men’s high-fashion dressing with his multiple outfit changes during his episode. He started the night off in a Celine black suit embellished with crystals and later changed into a graphic printed Dior Men dress shirt from fashion designer Kim Jones’ collaboration with artist Kenny Scharf. 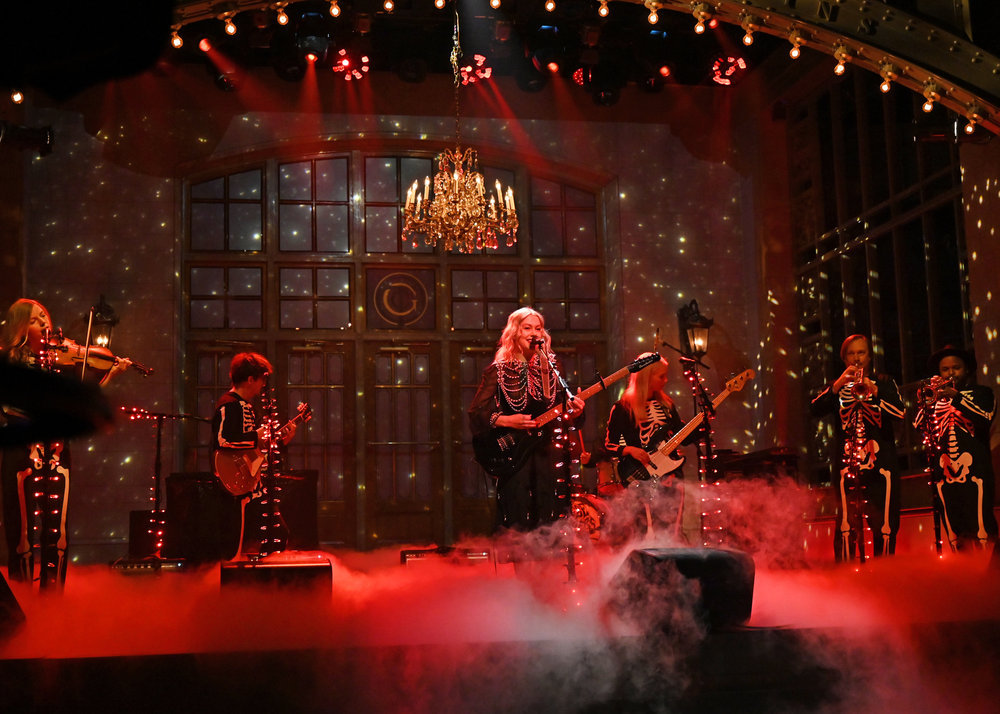 Phoebe Bridgers performs ‘I Know The End’ on “Saturday Night Live.” Will Heath/NBC

Phoebe Bridgers regularly wears skeleton-inspired looks, and she leveraged the style for her debut performance on “Saturday Night Live.” The musician looked to Gucci for the performance, wearing a black pleated silk crépon dress with a pearl-embellished ribcage waistcoat. She finished off her performance of “I Know the End” by smashing her guitar onstage. 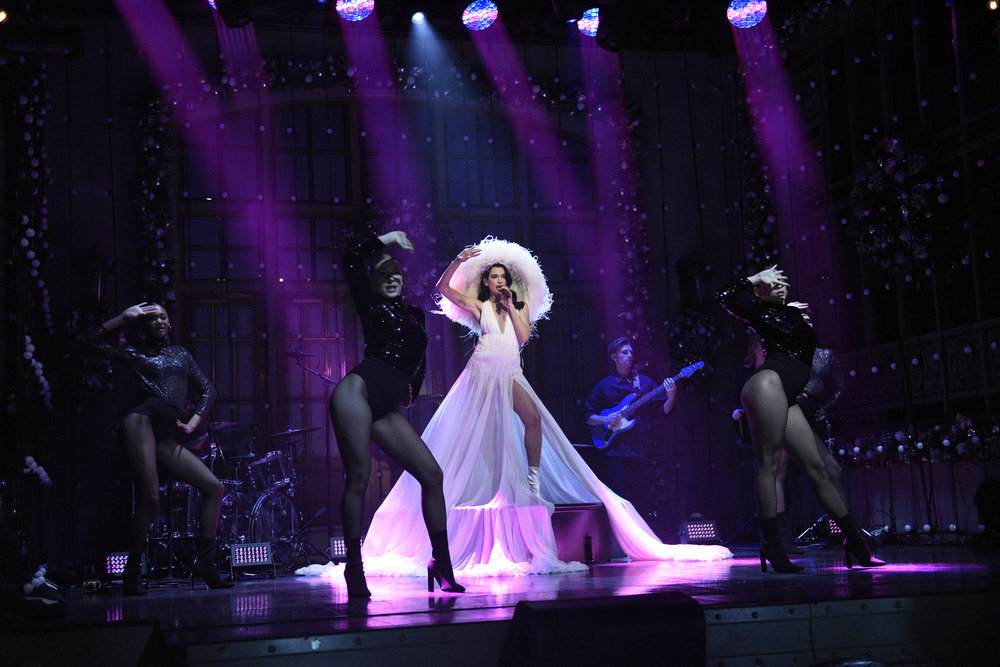 Dua Lipa ended the 2020 “SNL” shows with one of her most fashionable performances to date. The Grammy-winning singer chose a vintage Azzedine Alaïa leopard print bustier from the designer’s 1991 fall collection — which was made famous by the likes of supermodels Naomi Campbell, Christy Turlington and Yasmeen Ghauri — to perform her hit song, “Don’t Start Now.”

She then looked to Pierpaolo Piccioli’s Valentino fall 2020 couture collection to perform “Levitating.” The singer wore a flowing white dress with a matching oversize, feathered hat.

For the episode’s promotional videos, the singer wore a vintage Mugler dress reminiscent of the designer’s 1981 “vampire dress.” 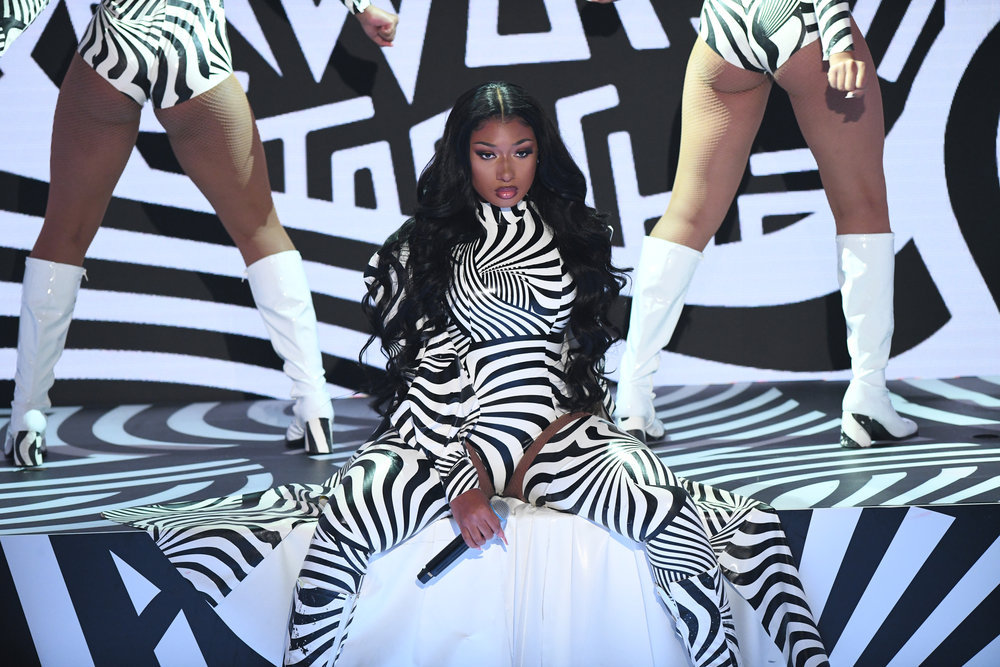 Megan Thee Stallion started off the 46th season of “Saturday Night Live” on a high-note with a statement-making performance of her two hit songs, “Savage” and “Don’t Stop.”

The rapper’s statement didn’t come in her sartorial choices — which were two form-fitting lycra bodysuits — but in the set design. During her performance of “Savage,” Megan Thee Stallion sang against a psychedelic black-and-white backdrop that prominently featured the message “Protect Black Women.” The backdrop then changed to a message to Kentucky Attorney General Daniel Cameron, who had chosen not to pursue major charges against the police officers who had killed Breonna Taylor.