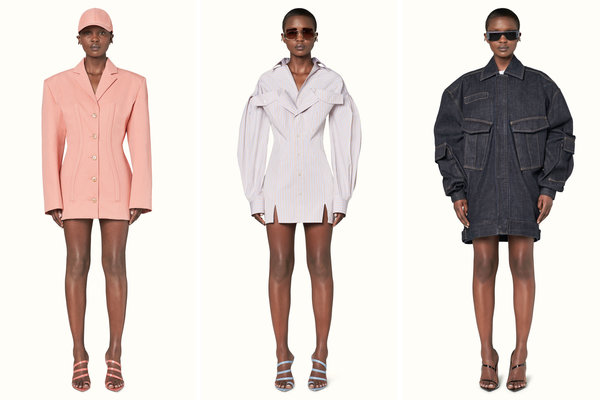 PARIS — The rollout continued in Paris on Wednesday afternoon, as an army of international fashion editors descended on a glossy shop in the Marais. There was a heavy security presence outside and crushed velvet couches within.

They were there for the first official viewing of the first collection from the first black female designer at the first new house introduced in decades by the luxury group LVMH Moët Hennessy Louis Vuitton.

They were there, in other words, for Rihanna. But she was nowhere to be seen. She was, the gathering was quietly told, running a little late. Almost three hours, to be exact.

In the meantime, Jay Brown, Rihanna’s longtime manager, held the fort as guests made a quick perusal of the inaugural Fenty line, which goes on sale May 29. (The space where the editors were gathered would be a pop-up store opening on Friday.)

“I’m overwhelmed, she’s overwhelmed, it is a major milestone and life achievement, for Rihanna but also the team here,” Mr. Brown said, adding that “98 percent” of the team was now based in Paris, including Jahleel Weaver, a former stylist who is now the label’s style director. (Rihanna herself is based in London.)

“To say she’s a perfectionist would be putting it lightly,” Mr. Brown said. “She’s been obsessional on getting this right. Regardless of what others may make of it, she’s immensely proud of this and has really worked herself to the ground.”

The woman in question did not appear any worse for wear when she finally appeared — towering in stilettos, practically glowing in a white corset dress, a glass of Champagne clutched in her hand and enthusiasm for the first collection — named Release 5-19 for the month and year it will become available — on her lips.

Her design inspirations, she said, came from everywhere, particularly her journey as an immigrant, from Barbados to America and now London and Paris. “Angles, textures, colors — I screen-shoot them constantly, bookmark them, folder them, then text them all to Jahleel,” she said. “Later, we have a conversation. And hopefully, then, the magic happens.”

As to that magic? A consistently bold, oversize, tailored silhouette appeared to be the backbone of the collection, with corset construction and power shoulders emerging as another leading hallmark. See the series of Japanese denim jackets with cargo pockets and split flare pants, a coral pink blazer with structured feminine curves, and a signature corset blazer dress with exaggerated shoulders. Also fanny packs that doubled as waist-cinching sashes.

“It’s about creating a style for women that makes them feel strong yet beautiful,” Rihanna said as she stood next to a floor-to-ceiling tower of frameless wraparound sunglasses in a kaleidoscopic range of hues. “So in my case, and for this particular drop, that is making pieces that embrace my shape, but also make my waist look small.”

Crisp white poplin or striped shirts, some with mutton sleeves or with matching shorts and skirts, took a more relaxed line, as did several variations of big structured pants. Indeed, there was a grown-up practicality at the forefront of many designs, such as the new Fenty stilettos, with cutouts and a ferociously pointy toe but which came in a broad variety of heel heights.

That the sizes offered up by this debut collection, which go up to a French 46 (an American 14), cover a wider range than most traditional luxury houses was a priority, Rihanna said. Above her — above it all — loomed the new graphic silver Fenty logo, inspired by a Greek key design.

Prices, which start at around $200 for a T-shirt and rise to around $1,500 for outerwear, have been the subject of ongoing debate. Rihanna acknowledged that only a small fraction of her tens of millions of fans would be able to afford an $1,100 dress, but ultimately, she said, “luxury couldn’t be something that cost 30 bucks.”

“It has to be something more,” she said. “The lower priced pieces are in there, too, and that was so important to me, but so was building a business based on quality. And real quality costs.”

“Fenty has been my baby from the beginning, but the last few months have really been a learning process, both professionally and personally,” she continued. “We have such a wealth of expertise at our fingertips now, with a core design team of 12 or so here in Paris who are truly the best in the business. It’s been humbling to watch them help me shape my vision to get it where we needed it to be. They inspire me to be better, and I feel like we are making it work.”

She praised LVMH for being flexible around her many commitments, as well as supporting a fully direct-to-consumer model.

As for Mr. Weaver, she said: “We have a brother and sister like relationship. It’s not like we agree on everything all the time, of course not. But what we do have is a deep sense of trust in one another. If he says something is good or bad, I respect his opinion, and vice versa. You need someone like him around.”

When asked if she was concerned about the reception of her work from critics and fans, Rihanna shrugged.

“I am not nervous,” she said. “If you constantly care what people think, you can sometimes end up hating yourself, so I simply don’t get into it. Ultimately some people will like it. Maybe some people won’t. But it’s just like my albums: The only way it’s getting out into the world is if I really love it and am proud of it. Take it or leave it.”

Elizabeth Paton is a reporter for the Styles section, covering the fashion and luxury sectors in Europe. Before joining The Times in 2015, she was a reporter at the Financial Times both in London and New York. @LizziePaton

January 26, 2020, Comments Off on NBA stars in tears on live TV after Kobe Bryant’s tragic death in helicopter crash as Rockets vs Nuggets goes ahead – The Sun

January 26, 2020, Comments Off on Love Island fans praise Rebecca for saving the show and bringing the drama with Siânnise row – The Sun

January 26, 2020, Comments Off on Women reveal the agony of becoming a mum…when you’ve lost your own mother – The Sun

January 26, 2020, Comments Off on Joe Biden’s Campaign To Run Obama ‘Who He Is’ Spot In Iowa Markets During Grammys

Love Island 2020 – LIVE reactions as Siannese is set to be DUMPED alongside Nas in double elimination, say bookies

January 26, 2020, Comments Off on Love Island 2020 – LIVE reactions as Siannese is set to be DUMPED alongside Nas in double elimination, say bookies
We and our partners use cookies on this site to improve our service, perform analytics, personalize advertising, measure advertising performance, and remember website preferences.Ok