With nary a meat dress (a la the 2010 MTV Video Music Awards), mechanical horse (as seen at the 2013 American Music Awards) or egg (i.e. 2011 Grammys) in sight, Mother Monster still managed to make headlines for her fashion choices with the help of stylists Tom Eerebout and Sandra Amador. Embracing the golden age of Old Hollywood glamour, Gaga rocked voluminous gowns, jaw-dropping jewels and retro beauty looks Opens a New Window. that were all kinds of wow.

Kicking off the whirlwind season at the Golden Globes, the Best Original Song-winner had a major Cinderella moment in her periwinkle Valentino couture frock. And because she is Lady Gaga, she upped the ante of the look by dying her platinum blonde updo a shade of pastel blue to match.

From there, the songstress was fierce in feathers at the National Board of Review Gala and simply stunning in white gowns and dresses at the Critics Choice Awards, SAGs and Grammys luncheon. By the time music’s biggest night rolled around, Gaga was all about the glitz in her sparkling silver Celine number. And with the Academy Awards just days away, we cannot wait to see what the double-nominee has up her sartorial sleeve this time around. 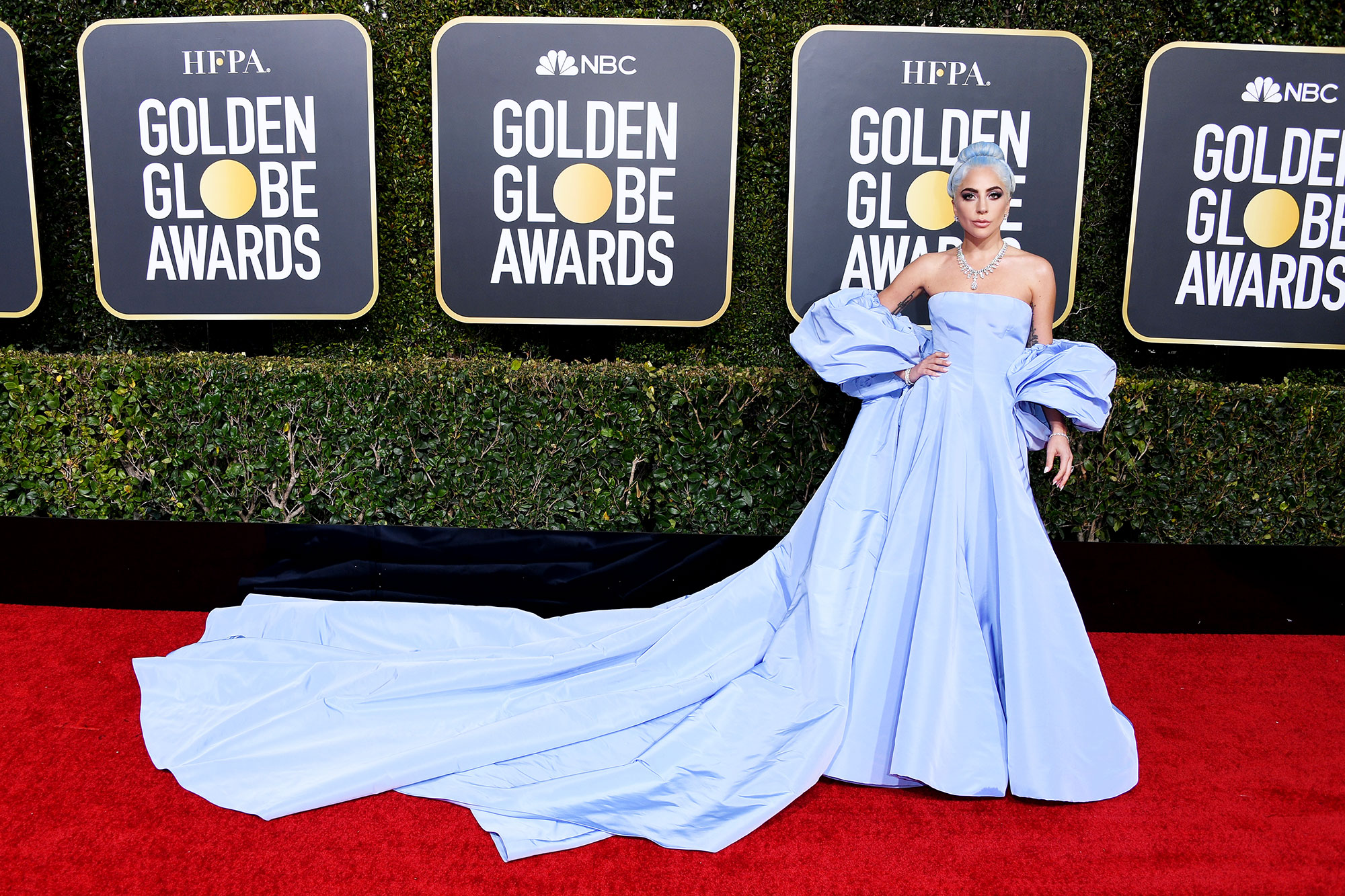 Starting off the season with a bang, the Best Original Song-winner stunned in a periwinkle blue Valentino Couture frock (and matching hair!), Tiffany & Co. jewels and Giuseppe Zanotti shoes on Sunday, January 6. 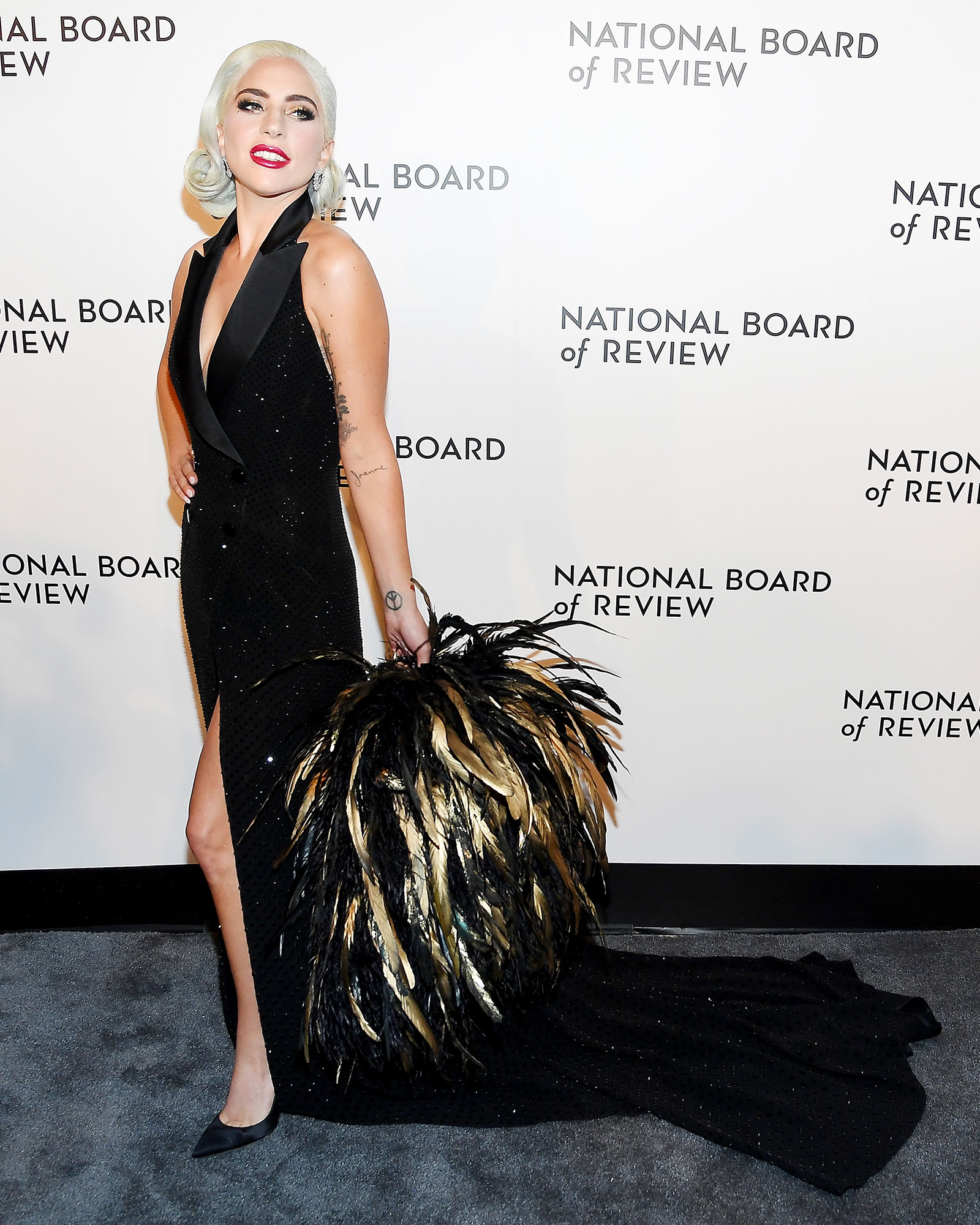 National Board of Review Gala

Taking home top honors with a Best Actress win on Tuesday, January 8, Gaga was giving Us all kinds of boss-lady vibes with her Ralph Lauren tuxedo gown and feathered shrug. 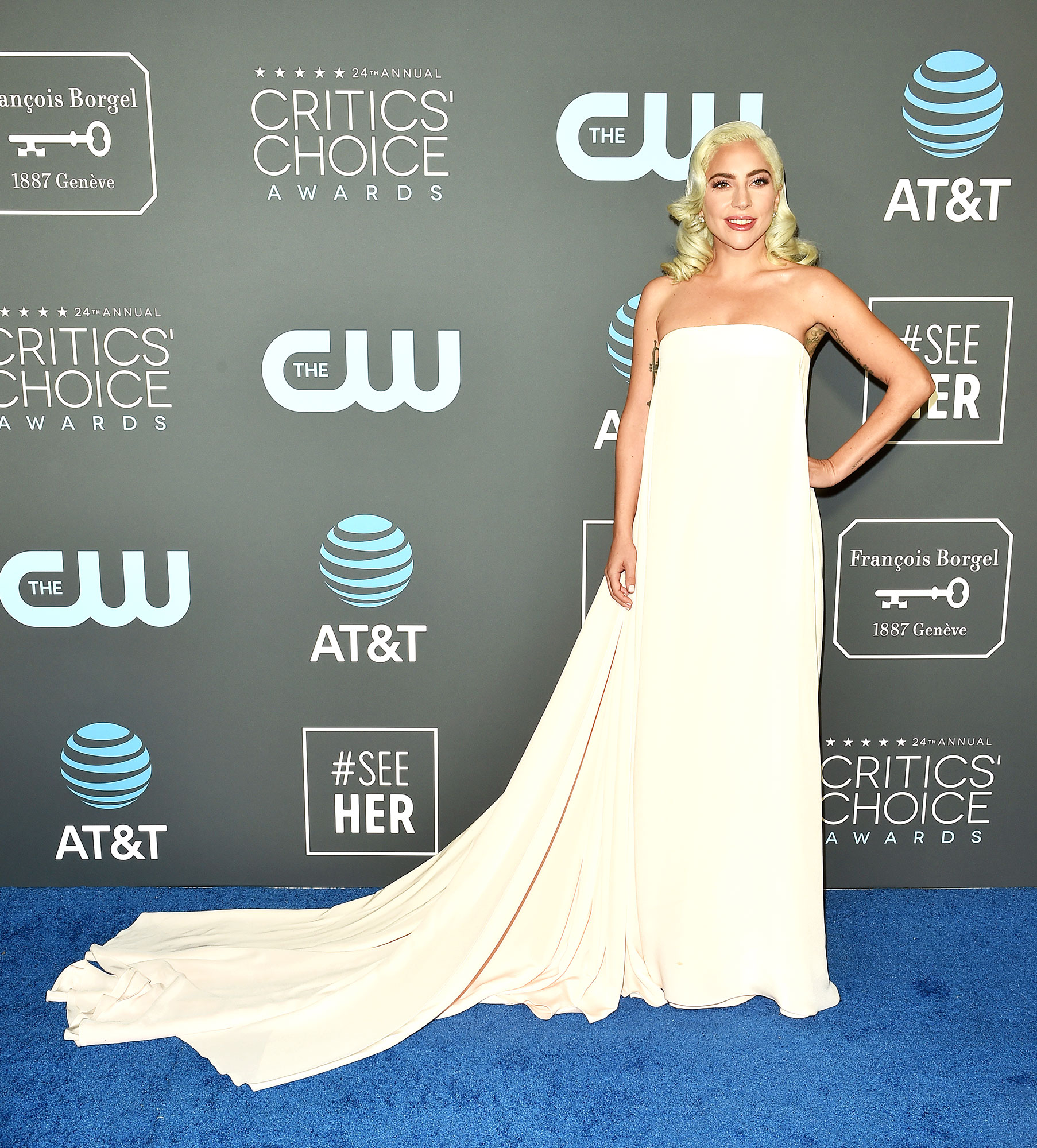 Mother Monster was a big winner on Sunday, January 13, receiving three awards (including a Best Actress tie with Glenn Close!) in her Grecian-inspired Calvin Klein gown and Djula diamond earrings. 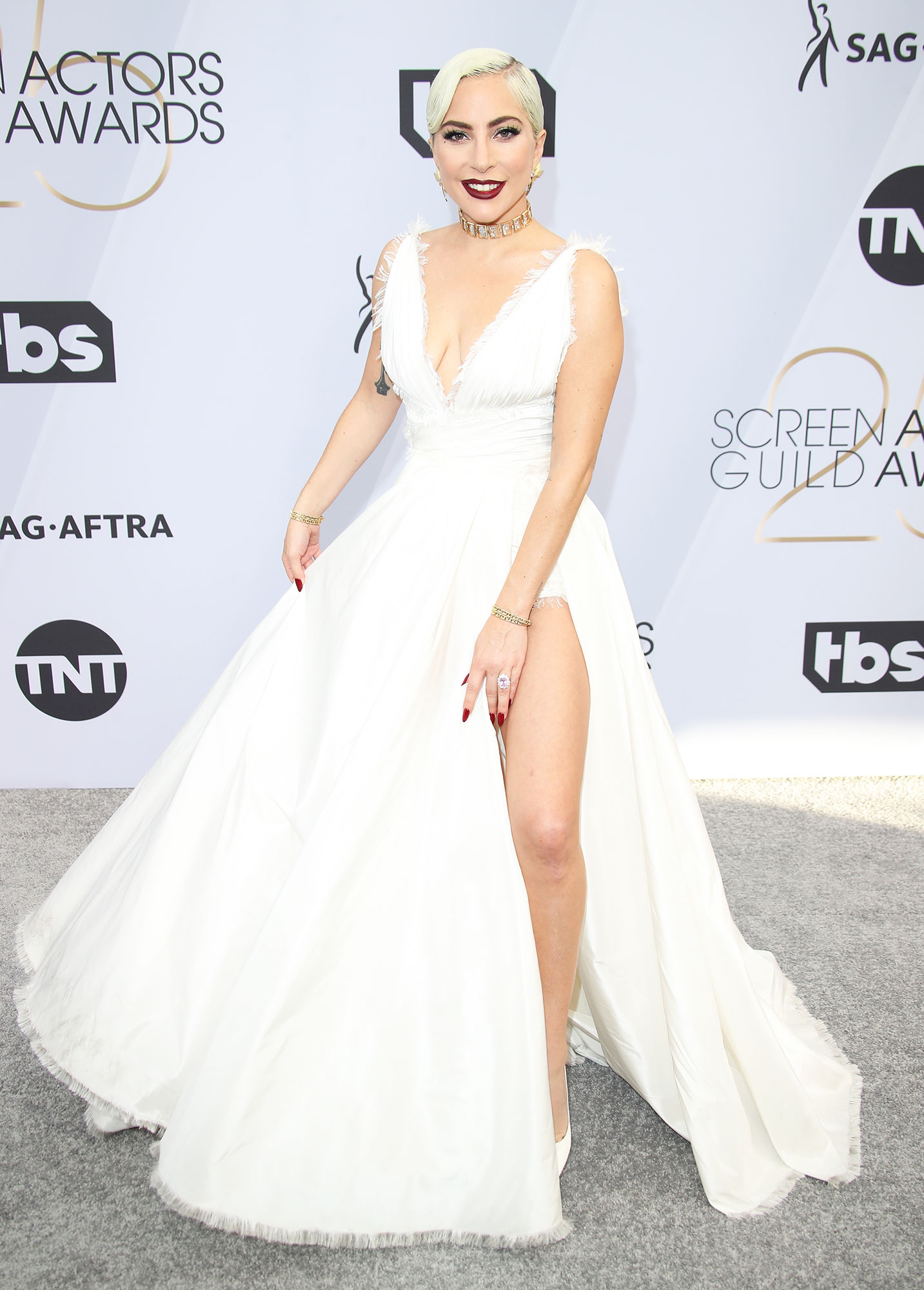 She may not have won a SAG on Sunday January 27, but she did win many best-dressed lists with her sexy white Dior couture gown, Tiffany & Co. jewels, Jimmy Choo pumps and rich oxblood lip. 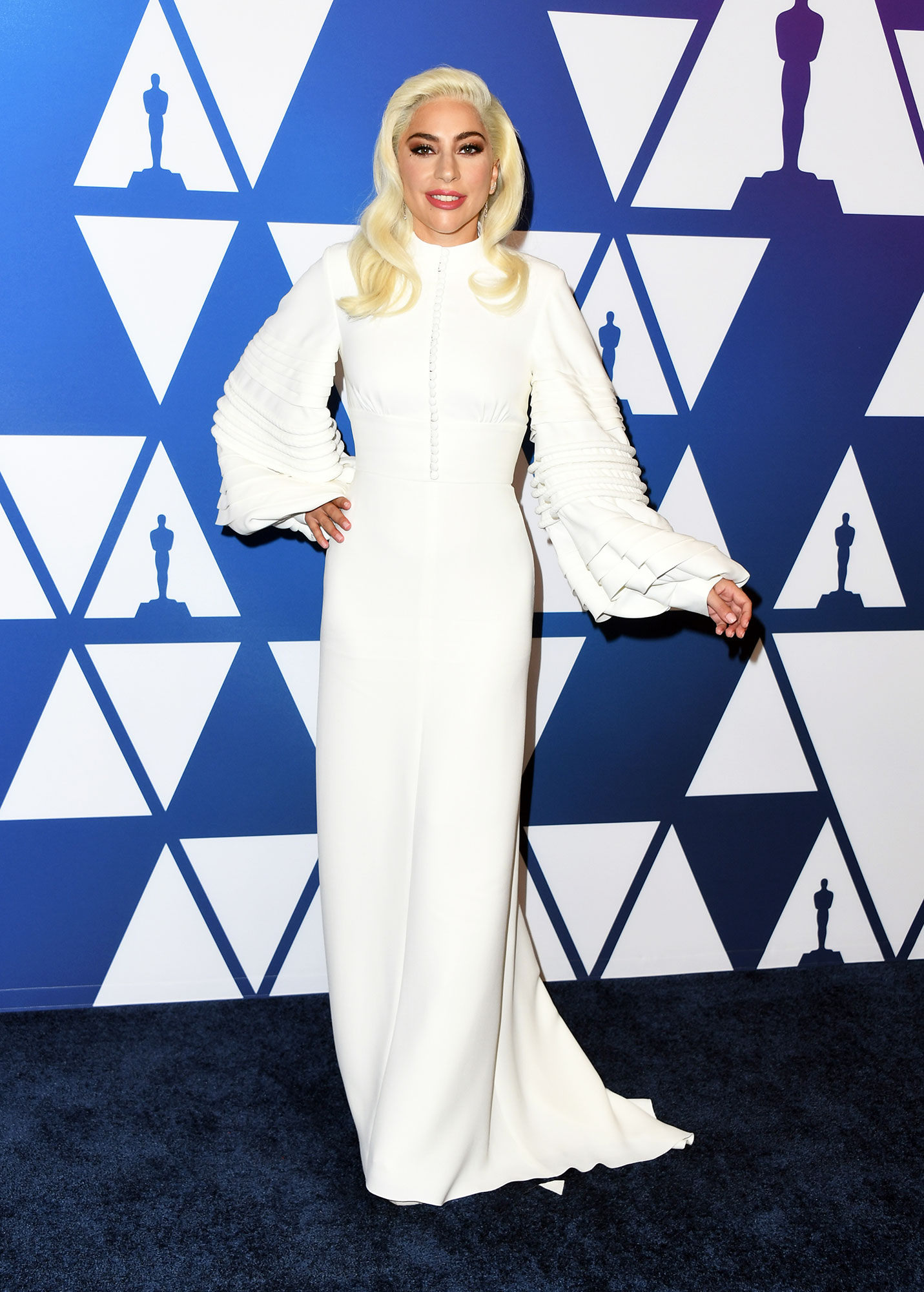 The songstress was a vision in Louis Vuitton at the pre-show reception on Monday, February 4.