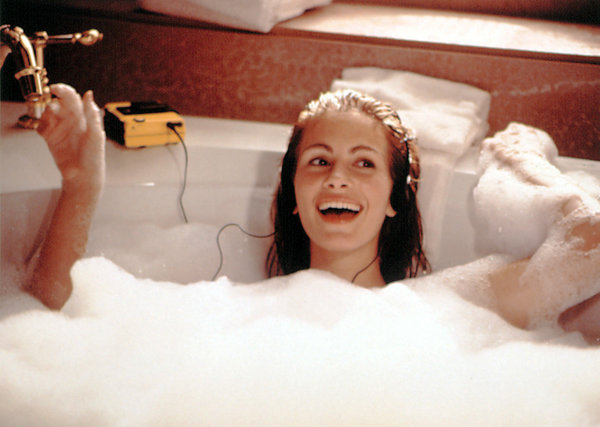 “I still write with a fountain pen,” said Katy Klassman, who with her mother owns and runs a fashion boutique in Washington, D.C. “I love to go to bed early with a paper book.”

Ms. Klassman is as analog driven in her self-care routines, especially her bath.

“Maybe I’m just born in the wrong century,” she said. She remembers her grandmother bathing with an old-fashioned sponge and fragrant soap. “It was one of the things that made her for me the most glamorous woman in the world,” she said.

Ms. Klassman was talking about the kind of glamour that makes showering seem a dully perfunctory rite. Bathing, by contrast, is a steamy indulgence apt to conjure floods of cinematic imagery: Elizabeth Taylor as Cleopatra lounging in a lotus flower bath; Julia Roberts covered in suds in “Pretty Woman”; and, on the brawnier side, Sean Connery as James Bond, enjoying a loll in an oversize tub.

But glamour is only part of the draw. Baths are now touted as gadget-free zones, retreats from the sensory overload of daily life.

At the same time, the tub is as often promoted as a playground, a setting from which younger fans post snapshots of themselves adrift in swirls of many-colored suds. Those myriad selfies are but the latest indication that, for a new generation, the bath is heating up.

“In the past two years we have seen bath time taking off,” said Alisha Ramos, the publisher of Girls’ Night In, an online newsletter aimed at 25-to-34-year-olds seeking a respite from overcharged lives. For her followers and a widening circle of contemporaries, the bath is a place to unplug, to indulge in the ultimate luxury: taking time for oneself.

Bathing promises serenity on tap, but it also has purely aesthetic appeals. A tour of Instagram and other social platforms suggests that for the tech addicted, the bath is nothing so much as a vehicle for self-expression.

“The rise of social media accelerated bathing’s popularity,” Ms. Ramos said. “It’s become all about creating a beautiful setting that you want to capture and share.”

So much, then, for taking time to unplug.

For proof, look no further than Pinterest, where tens of thousands of images showcase the bath as a happy place, a haven stocked with towels piled like layer cakes and caddies that groan with chunky candles and gemlike apothecary bottles.

Log on to Instagram, with its flurry of suds-soaked celebrities — Cara Delevingne, Rihanna and Jordyn Woods among them — posting selfies from their tubs.

Or browse #bathart, a hashtag teeming with images like that of a young woman lounging in a bath of finely sliced oranges and limes; another gaily surrounded by rubber duckies; and still others steeped in the kinds of fizzy, undulating colors produced by bath bombs, those wildly popular varicolored spheres that dissolve into a sea of psychedelia.

“People want an experience in the tub,” said Brandi Halls, the director of brand communication for Lush, a maker of bath bombs. For many, that calls for a tub full of imagery worthy of a Pink Floyd poster or a frame from “Liquid Sky.”

Lush is among the most popular in a proliferation of companies promoting the bath’s sybaritic attractions. Its unit sales in North America, Ms. Halls said, have roughly doubled in the last three years, from just over eight million bath bombs to more than 15.6 million in 2018.

But bathing’s reborn popularity can be as readily chalked up to an intensifying romance with rituals, according to Lucie Greene, a trend forecaster at J. Walter Thompson. Bathing, Ms. Greene said, offers “a meaningfully slow experience that has its own meditative layers.”

According to a 2018 study by the Innovation Group, J. Walter Thompson’s trend-forecasting unit, the recent fixation on bathing represents a sea change. “Even five years ago, the bath might have been seen as a form of indulgence,” Ms. Greene said. “Now it’s recognized as a form of therapy, a tool in maintaining a healthy mental outlook.”

It is especially alluring to millennials, she said, many of whom are cutting back on drinking and late-night carousing in favor of alternative ways to relax.

For Ed Burstell, the senior vice president for product innovation at Neiman Marcus, “a bath is a form of mental medication.” A self-described restless sleeper and proponent of aromatic balms and potions, Mr. Burstell champions the spalike benefits of a lingering soak, a practice that, like yoga, white-noise immersion and maintaining a sugar-free diet, is an adjunct of so-called self-care.

It is, moreover, an at-home extension of a global wellness industry that grew 12.8 percent from 2015 to 2017, to $4.2 trillion, according to a 2018 report by the Global Wellness Institute, a nonprofit organization in Miami.

Websites and stores like Nordstrom, Neiman Marcus, Anthropologie, and even mass merchants like Target, may aim to tease out shoppers’ inner diva, pitching fizzy elixirs and exotic oils, but for bathing’s most ardent devotees, it helps to have deep pockets.

Consider the outpouring of pastel-tinted creams, oils and gels like Molton Brown Mesmerising Oudh Accord & Gold Bath and Shower Gel ($35), infused with gold flakes, and its Fiery Pink Pepperpod Body Wash ($32), redolent of a holiday in the Maldives. Or the Prosecco Bubble Bath from Antica Farmacista ($38), housed in a crystalline flacon and, the maker notes, “generously enriched with honey, aloe vera, green tea and jojoba oil.”

Herbivore, a favorite with vegans and self-proclaimed purists of every stripe, recently introduced Amethyst Exfoliating Body Polish ($44), which, as its name suggests, derives its Instagram-worthy purplish hue from a heaping of crushed amethysts.

Himalayan pink salt, sandalwood granules and chia seed oil enrich the Martini Emotional Detox Bath Soak, a potion from Goop purporting to “take the edge off and support spiritual growth and expanded consciousness.” At $35, the Martini contains just enough product for three baths at $10 to $12.

Like Gwyneth Paltrow (the Goop founder), Ellen Carey, who owns Seedgarden, a fashion showroom in New York, is a bathing enthusiast. “Don’t try to get me out of the house on Sunday,” she said, joking.

Ms. Carey worked with Hellen Yuan, a beauty entrepreneur, to whip up #Love ($85), a granular bath brew conceived, according to the promotional text, to “strengthen and soothe the spirit,” and sold through Ms. Carey’s showroom.

The extravagance of bath time extends to the tub itself. In more affluent households, vessels made of copper and stone can serve as the weighty centerpiece of a bathroom masquerading as a sybaritic temple.

In its forthcoming 2018-2019 Industry Outlook Study, the National Kitchen & Bath Association forecasts a jump in bathtub sales from $9.69 billion for 2017 to $10.34 billion in 2018 and $10.86 billion in 2019. According to the study, soaking tubs, some with hand-painted finishes and others of hammered copper, are especially popular in the luxury market.

The Global Wellness Institute predicts that the industry will continue to grow, particularly in the United States, where health care costs are on the rise. In such a climate, consumers are increasingly motivated to take charge of their own well-being, the G.W.I reports, noting that the growth of wellness is “inversely correlated with economic and ‘human well-being’ downturns.”

But economy be damned. Bathing buffs are more drawn to a warm-water soak as a physical and emotional palliative.

For Tug Rice, an artist, the bath is a seasonal comfort. Recently he posted a whimsical selfie on Instagram, a watercolor sketch that shows his lean frame immersed in bubbles. “Prioritizing self-care in the new year!” he wrote in the caption.

Time for good books, tea with lemon and honey and hand sanitizer, he added — and long baths. 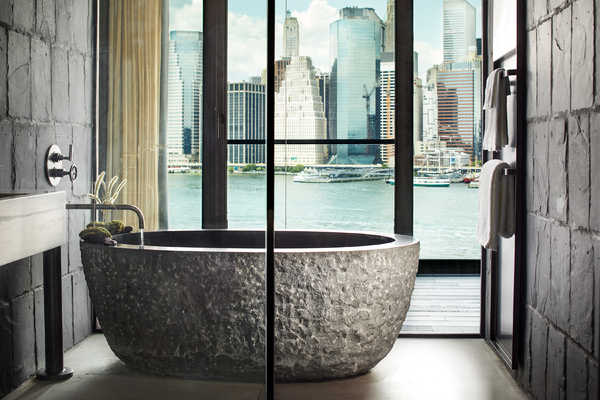