A TIKTOK user has revealed the embarrassing moment her bikini strap became untied while going for a swim on vacation.

@alexxohs_ posted the TikTok of her splashing around in Mexico when she admitted it "took me a minute to realize." 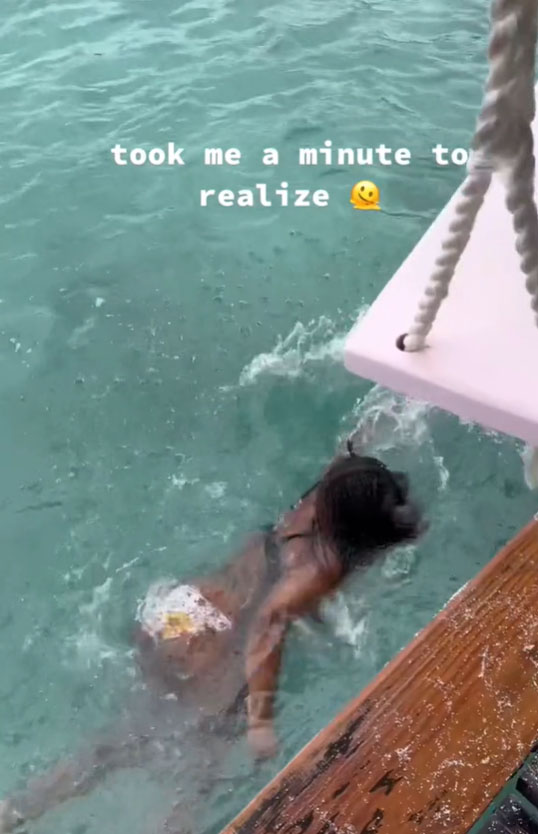 The video then zooms in to show her bikini top has come undone as she paddles past several children.

The caption reads: "I indeed was not laughing. sorry to those guys in the water that I flashed."

One user agreed it was a distressing situation, offering a "uh-oh" in the comments.

It comes after another woman was slammed for wearing an 'inappropriate' bikini in a family pool.

Footage showing the woman in the skimpy, skin-colored one-piece surrounded by splashing kids has divided opinion online with some users saying there is nothing wrong with her swimsuit.

A concerned parent who filed the video, zoomed in to show the woman's costume and shared it on TikTok.

Opinion was divided in the comments, with one calling it “public indecency” and another claiming the outfit “belongs on an adult beach for sure.”

Other TikTokers said it was only prudish parents who would have a problem with it, not their children.

“I wouldn’t have even noticed if it wasn’t pointed it out,” another user claimed.

Another influencer and model even said her mother was sick of her posting "inappropriate" bikini pictures.

"My mom: Live you need to stop posting in bikinis, it's inappropriate," TikToker Liv Centola wrote in the clip.

Liv revealed that her mother just "doesn't get it" in the caption of the video.

They took to the TikTok comments section to share their thoughts on her mother's criticism.

"Shannon always has something to say. Love her though," wrote one friend.

Another user said: "You are beautiful OMG."

"You are so pretty," commented a third person.