The daughters of rock and fashion icons Mick Jagger and Jerry Hall, Georgia May and Lizzy Jagger, led a star-studded ’80s-themed line-up at the third NGV Gala on Saturday night.

The Jagger sisters jetted into Melbourne on Saturday morning to the event, which marked the opening of the exhibition Keith Haring and Jean-Michel Basquiat: Crossing Lines. 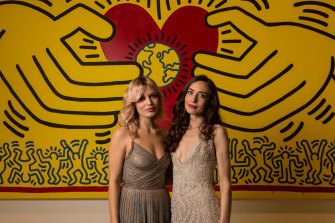 Georgia May and Lizzy Jagger at the NGV gala on Saturday evening. Credit:Scott McNaughton

The blockbuster show celebrates the work of the 1980s artistic icons, who both died prematurely but in their short lives were influential on pop culture icons including Madonna and Andy Warhol.

A Polaroid portrait of the Jaggers’ mother, Jerry Hall, taken by Maripol, who was also responsible for Madonna’s Like a Virgin look, which features in the show. 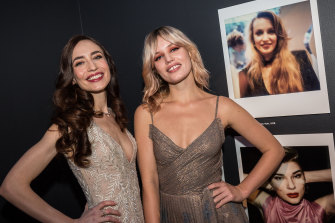 Lizzy and Georgia May Jagger posing in front of the Polaroid shot of their mum, Jerry Hall, which was taken by Maripol. Credit:Scott McNaughton

Lizzy, who was born in New York in 1984 and is also a keen Polaroid photographer, said the exhibition reminded her ‘‘of when I was a little kid, seeing all of the street art downtown’’.

‘‘From the second you walk into the exhibition you’re welcomed back in time; it’s like a time machine.’’

Georgia May, wearing a Dior gown, said she and her siblings grew up knowing their parents were famous ‘‘but to us they were just our parents. Obviously we got to meet some really amazing people, including artists, who maybe when we were younger we didn’t know.’’

Lizzy, who was wearing a feathered gown by Adelaide-based designer Paolo Sebastian, has been working for five years to help achieve legal gender equality in the United States.

‘‘America is one of seven countries around the world that doesn’t have equality under the law between men and women,’’ she said.

‘‘Once I found that out, and with everything going on in America at the moment, it was obviously an important thing to accomplish.’’

From the second you walk into the exhibition you’re welcomed back in time; it’s like a time machine.

Asked about their affinity for ’80s fashions, the sisters said they had each been gifted several pieces from their Texas-born mother.

Added Georgia May: ‘‘She says always be nice to everyone even if they’re not nice to you. She has very southern, good manners.’’

Ahead of the third annual gala cocktail party, an intimate dinner for more than 100 guests was held at the gallery. Guests included model Gemma Ward, actress-activist Isabel Lucas and Victorian Premier Daniel Andrews.