Just a few days after her recent break-up was made public, Ferne McCann took to Instagram with a not-so cryptic message: “This was just a chapter, baby girl…” she wrote. “Keep reading.”

It was a philosophical approach to the split from live-in partner Jack Padgett, and Ferne, 31, admits she’s almost surprised herself at how calmly she’s handled the fallout.

Speaking for the first time about it, she remains determined not to get bogged down in heartache.

“I think you can wallow and get really sad and it’s important not to bury those feelings when things come to an end.

"But I have no regrets, because I know it will clear the pathway for… not even necessarily another guy, but for something else. When one door closes, another one always opens.”

“Well, I’ve restarted Sex And The City from the beginning for the third time in my life!” she jokes.

“The dynamics of my household have changed again, and it’s always sad when things come to an end.

"I am such a sucker for love – I love love so much, and of course I want to find my happy ever after.

“But it’s been such a mature, grown-up break-up – and no one did anything wrong. I’ve learned so much from this relationship and from Jack, and we had some beautiful times.

"He is the first person I’ve ever lived with, so I have made some special memories that I will cherish forever.”

Ferne and Jack, 27, got together at the end of last year and moved in together fairly quickly, bubbling up in response to the looming winter lockdown.

Ironically, she says, the pandemic pushed the fast-forward button on the relationship but also speeded up its decline.

Having had no dating period to gradually adjust to each other’s schedules, once the restrictions started lifting and marketing manager Jack’s work picked up again, it came with a jolt.

“At the start of lockdown, a lot of couples made the decision to move in together quicker than perhaps they normally would, which is what we did.

"But in the end, it also accelerated our break-up, because coming out of lockdown and the world opening back up meant suddenly our lives were very different and we were like passing ships.”

Apart from a long-distance fling with New-York-based Albie Gibbs, 25, last year, Jack was her first relationship since splitting from Arthur Collins, 28, in 2017 while pregnant with daughter Sunday, who turns four in November.

“I always say I don’t need a man because I’m Ferne McCann! Independence as a woman in this day and age is paramount.

"I feel positive about my future and I’m good at being single – I know how to be by myself. I can dance to the beat of my own drum.”

Ferne’s very much of the mindset that it’s not worth wasting time and energy on something that isn’t working. Far better to front it up and simply move on.

“Oh, 100%. You’re more frivolous in your 20s. But it’s about having respect for yourself and recognising when something isn’t working. And if it’s not, let’s act on it.

“That doesn’t take away the emotion – break-ups are never fun.

"But I also feel wiser and grateful for having experienced my fair share of heartache, because I now have the knowledge to pass on to my baby girl when she goes through it.”

Ferne has surrounded herself with friends and has been looking especially glam on Instagram lately – her “Royal Ascot at Home” party in June, when she wore a killer white trouser suit, being a prime example.

'I THINK JACK HAS MUTED MY STORIES'

After all, it’s only natural, post-split, to want to look extra-hot so someone sees what they might be missing, right? 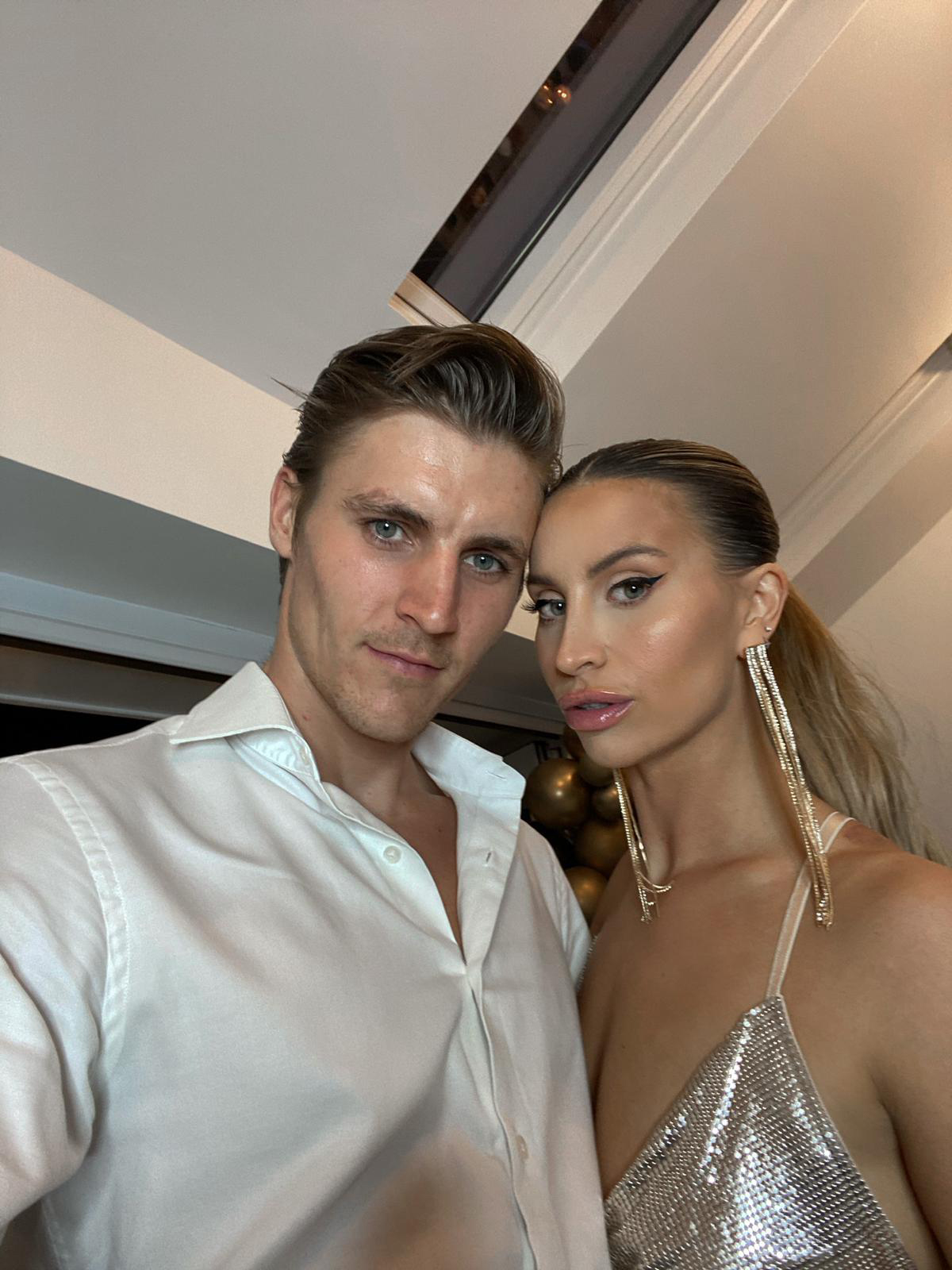 “I don’t know what you’re talking about…” she says, mock-offended, before laughing.

“To be honest, I think Jack has muted my Stories and doesn’t watch them any more, so it’s a bit pointless, but I do think you do want to feel at your best after a break-up.

"That was the first day I properly glammed up and it felt so nice, and more importantly, it felt so good to be with my friends.

"That’s what a girl needs when she has recently had a break-up, and my smile was ear to ear all day. I danced and let my hair down and forgot about everything really. My friends are my family.”

The cameras have followed her and Sunday’s journey since she found herself pregnant and facing life as a single mum after boyfriend Collins went on the run following an acid attack in a London nightclub that left 22 people injured.

He was later convicted of GBH with intent, as well as ABH, and jailed for 20 years.

Ferne ended the relationship as soon as she found out about the attack, and was terrified about what the future held for her and her baby.

“The show has a very special place in my heart because it was almost a bit of a  lifeline for me when I needed focus and was going through a difficult time in my life,” she says today.

“A lot of people said it must have been really tough to film, but actually, I needed it and it was therapeutic for me. It might not have always felt like that at the time, but my life has evolved with the show.

“I started when I was pregnant with no idea how to raise a baby. I could barely look after myself!

"And now I’ve grown into a woman, my daughter is nearly four and I’m in a completely different place.

"All the fans have watched Sunday grow up and develop alongside me becoming a mother – and the highs and lows of very much learning on the job.”

It’s the watchability of the always-entertaining Ferne and the relatability of her everyday life with Sunday that are key to the show’s success.

It’s been important to her from day one to be completely authentic.

“I wear my heart on my sleeve, I’m very transparent. I just feel when people are self-editing and not being genuine, it’s obvious that they’re holding back.

"That’s why I am warts-and-all, and it’s weird because I wouldn’t put Sunday having a tantrum on my Instagram, yet I allow the cameras to film it.

"It’s just real, because no matter who you are right across the spectrum, there’s a sense of unity when you’re a mum. We all have the same experiences.”

Ferne’s best friend and fellow former TOWIE star Sam Faiers, 30, recently pulled the plug on her own long-running reality show The Mummy Diaries – which she filmed with sister Billie – after deciding her children Paul, five, and Rosie, three, had had enough.

Ferne says it’s not something she’s considering herself at the moment, but she’ll know when it’s also time to call it a day.

“I totally understand and respect Sam’s decision, because it is so full-on and it can be so tough when children are involved. Sam has been filming reality TV for so many years and her children are getting older, so I get it.

“With any job, you have moments that cross your mind where you debate whether you want to do this forever, but right now I am someone who lives for today.

"There is no point planning ahead, because you can be thrown off course and have your whole world change in an instant. Right now, I am happy and still very excited to be filming.”

It’s nearly six years since Ferne quit TOWIE and signed up for I’m A Celebrity!, which she saw as her chance to break away from the engineered dramas of life on the Essex reality series and show viewers who she really was.

What they discovered was a hilarious, kind and down-to-earth, albeit slightly kooky, woman’s woman – and they liked her an awful lot.

“The jungle was that moment where everything changed,” she says. “The TOWIE chapter had come to an end and I wanted to close it and move on, so it put me in a light where people could see the raw, unedited, unscripted version of me. I was being my genuine self and that’s why it worked.”

She went on to become a This Morning regular and earlier this year reached the final four of the BBC’s Celebrity Best Home Cook.

Last year she launched her own subscription fitness and wellness platform Embodyment and is a big advocate of “body contentment” rather than “body confidence”, which is a term she sees as coming with its own set of pressures.

“I sustain the body shape I am, but of course you have moments in your life – running around after the children or getting into a new relationship – where it’s difficult to remain ‘show-ready’.

"Life is for living – I’m an absolute foodie and I don’t want to live my life by numbers. 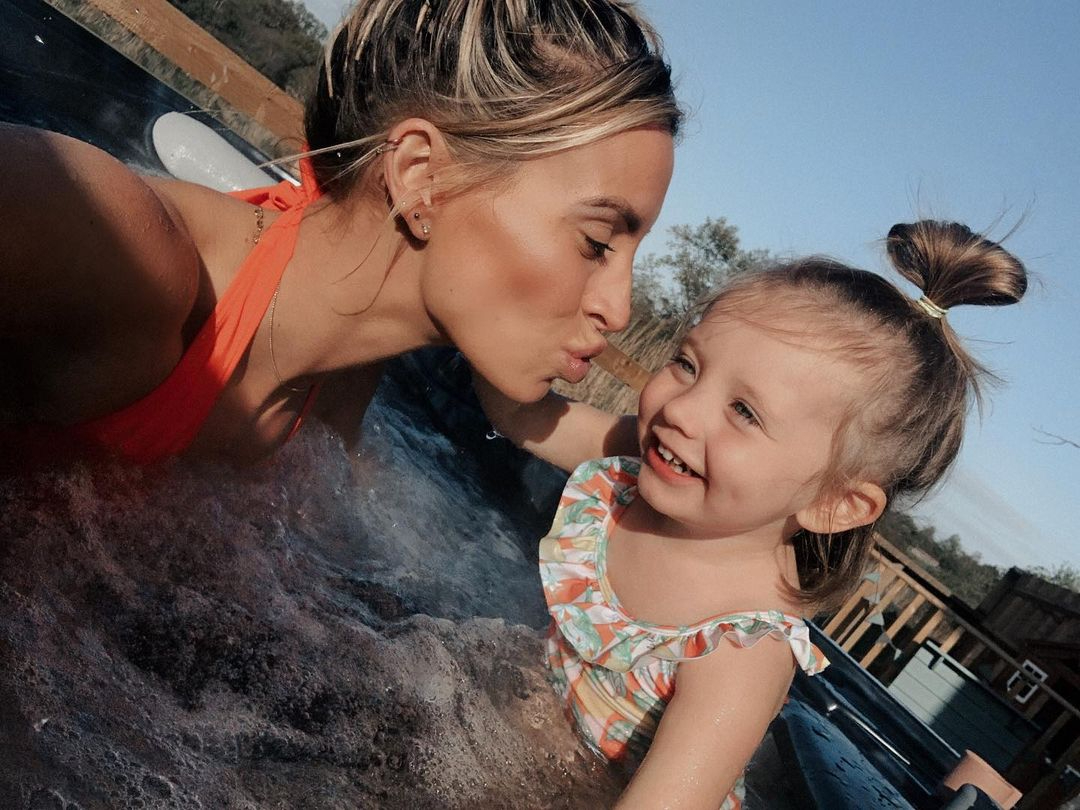 "It’s so easy to become fixated on numbers, whether that’s calories, what the scales say or your dress size, and I’m so over that.

“I just want to feel good and healthy and at my optimum, and for me, it’s not always about what’s in the mirror. If I feel good, I’m energised, getting good sleep and I’m fit for my daughter, that’s what is important.”

She adds: “I love the gym, but I also love the accessibility and ease of training at home, when Sunday’s in bed.

"Keeping fit and active is such a big part of my lifestyle, so if I can share that with others, then I am all for it.”

Having already rescheduled her 30th birthday party four times, thanks to the pandemic, Ferne is hoping to celebrate – finally – in September.

It’ll be more than a year later than originally planned, but she’s pretty accepting of that and even appreciative of some of the changes lockdown brought about.

“I love simple living, which is why I really enjoyed part of lockdown, as much as I hate to say it.

"I enjoyed being cosy indoors with my daughter and not having to be anywhere, and just being present at home.

"And I have this new thing in that I’ve never felt more sure about who I am, so I feel very confident and certain about the decisions I make.”

This is a big difference from how she would previously do things.

“When I was 20, I used to fill empty silences, I’d never stand still. I’d constantly doubt myself – it would never just be: ‘This is my decision and I’m standing firm.’ Whereas now I have this sense of certainty.”

What does she think 20-year-old Ferne would make of the 30-year-old version?

“I think she would be really shocked! She would be like: ‘Damn, girl, you’ve grown up!’”

In the makeup chair with Ferne

What are your skincare heroes?

What do you splurge on?

Tom Ford liquid eyeliner is pricey but lasts a year. I love my flick.

Allow your concealer to set before you blend, or you’ll actually be removing the product.