Since 2019, Andrew Callaghan, 23, has been crisscrossing the country in a beat-up R.V. with his two best friends, documenting the absurd, outrageous and infuriating aspects of American life.

Through his reporting, Mr. Callaghan — 6-foot-3, with a mess of curly hair and a uniform of oversized taupe suits — has earned a following of 1.7 million on YouTube and thousands of paid supporters on Patreon.

But recently, fans have been wondering if his show is over. He hasn’t posted on YouTube since mid-November. The show’s social media accounts have been inactive for months. His podcast last released an episode on Jan. 15. “What is happening to All Gas No Brakes?” one fan commented below the show’s last Instagram post, in January.

On Tuesday, March 9, fans were met with a cryptic message posted to the “All Gas No Brakes” Instagram account. “Sorry for the lack of content … the team is still working on a secret project that we can announce soon,” the statement read. “In the meantime we’re officially taking the show international and we’re looking for correspondents from around the world.”

“I am no longer associated with All Gas No Brakes,” the statement read. “I no longer receive any of the Patreon crowdfunding, YouTube monetization, or any other income. My team, Nic and Evan, who lived in the R.V. and created the original material with me, are also no longer involved. We have no control over any AGNB pages or future of the show.”

“I signed an employment contract without reading it,” Mr. Callaghan added. “Lesson learned.” 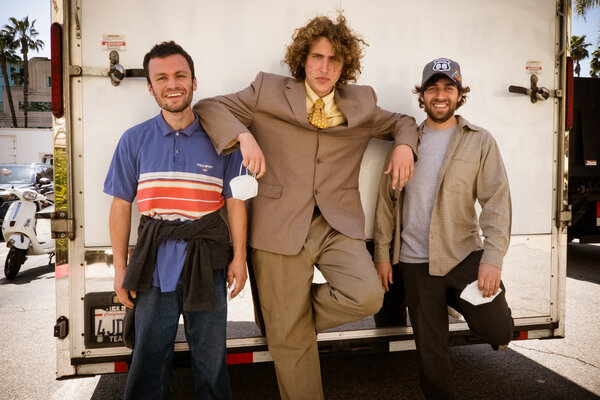 Mr. Callaghan started “All Gas No Brakes” in the fall of 2019. He’d graduated that year from Loyola University New Orleans, where he’d been accepted on a full scholarship.

As a teenager in downtown Seattle, he’d covered the Occupy movement, Juggalos, the online black market known as Silk Road and Seattle’s rap scene for his student newspaper.

“He’s always surrounded himself with odd people and been really able to talk to very odd people and allow them to feel seen and comfortable in ways some of the oddest among us don’t always feel,” said Owen Borges, 24, a filmmaker and friend of Mr. Callaghan’s who briefly worked on “All Gas No Brakes.”

“Wherever he went, a moderate crowd would follow, some for a chance in front of the camera, others just to watch the spectacle unfold,” a reporter for The Loyola Maroon wrote in 2019.

When he graduated, Mr. Callaghan knew he wanted to take his interviews on the road. The summer after his freshman year, he’d hitchhiked across America for 70 days, meeting all kinds of people. But to do that full time, he’d need money: for transportation, to hire a video team, and basic living costs.

Mr. Callaghan connected with Doing Things Media, a company founded in 2017 that had built a network of popular meme accounts, in the hopes of brokering a partnership.

The founders, Derek Lucas and Reid Hailey, monetized the accounts by producing branded content, selling merchandise and licensing videos. At the time, Doing Things was interested in making more original content. Mr. Hailey said he had seen Mr. Callaghan’s videos from New Orleans and felt that his work could be a fit for the brand.

“I was like, ‘Yo, if you guys buy me this R.V., I’ll make a sick show out of it and it’ll be a cultural exploration of America,’” Mr. Callaghan told Vice in a video from January. “That’s how it started: I convinced a company to buy me an R.V.” (He declined to comment for this article.)

In addition to the R.V., Doing Things offered Mr. Callaghan a salary of $45,000, plus additional money for equipment and production costs, and later, profit-sharing, according to people involved in the agreement. They hired two of Mr. Callaghan’s childhood best friends, Nic Mosher and Evan Gilbert-Katz, to help make the show. All Mr. Callaghan had to do was sign a contract. It was a no-brainer.

The group set off in the fall of 2019. Mr. Callaghan, always dressed in his signature suit, interviewed people at Burning Man, the Area 51 raid, a Flat Earth conference and a festival for furries (people who dress up as anthropomorphic animal characters for fun); the tone of the show was often humorous. As Mr. Callaghan’s audience grew, he started to get recognized at events.

In late May, the crew traveled to Minneapolis to cover the protests after the killing of George Floyd. Mr. Callaghan felt that many news outlets, in focusing on looting and fires, hadn’t captured the anguish of the protesters.

“It wasn’t so much of me being like, ‘Let me get political because I want to get more of a liberal audience,’” Mr. Callaghan told Vice. “It was like, ‘Media is not covering this. The media is not talking to the people causing destruction in Minneapolis and figuring out why.’”

His followers relied on him to make sense of the events. “The Minneapolis video set the show to a completely different level,” said Nate Kahn, 24, a podcast producer and videographer in Los Angeles who worked on “All Gas No Brakes.” “It basically went from funny one-minute Instagram clickbait to an actual boots-on-the-ground news source.”

According to people who worked on the show, Mr. Hailey asked Mr. Callaghan to focus on “party content” rather than news. “Reid from Doing Things was constantly pressuring us to make the show less political,” said Mr. Kahn.

Still, “All Gas No Brakes” continued to cover current events: anti-lockdown protests, a Proud Boys rally and the protests against police brutality in Portland.

Mr. Callaghan, in partnership with Doing Things, also entered into a development deal with Abso Lutely Productions, helmed by the comedians Tim Heidecker and Eric Wareheim, to turn the show into a longform project.

When shooting for that project began in October, Mr. Callaghan was still expected to produce content for Instagram and YouTube on the side, according to several people who worked on the show. Doing Things continued urging Mr. Callaghan to stick to humor, rather than news and politics.

“Andrew wanted to prioritize the things he cared about and was inspired by — the conditions of the pandemic, the end of the election cycle — rather than just crank out content for the purpose of being monetized by Doing Things Media,” said Lance Bangs, 48, a filmmaker and director in Portland, Ore., who worked on “All Gas No Brakes.”

Mr. Callaghan and his two best friends were parking the R.V. in Walmart lots and showering only when they could. “They were truly a three-person team making everything,” said Mr. Bangs.

Doing Things had started a Patreon for the show. Mr. Callaghan received 20 percent of the profits from the show and another 20 percent was split among other members of the show; Doing Things received the remaining 60 percent. (The company confirmed the figures.)

“It was a 360 deal where Doing Things owned everything Andrew did,” Mr. Kahn said. “They offered him a ‘promotion,’” he explained, but it included a six-month extension of his contract. Mr. Callaghan had also signed over the rights to the brand’s intellectual property and the name “All Gas No Brakes” to Doing Things.

‘This Is Not the End’

By the end of 2020, the relationship between “All Gas No Brakes” and Doing Things was strained. The crew wanted to produce independent journalism; and didn’t feel they could do that under the umbrella of Doing Things.

“We are always thinking about how to turn our social presence into a product,” Mr. Hailey told The Hustle in November of last year. “Can we make a game? Can we make a beverage?”

Mr. Callaghan’s image became commodified as merchandise. “I remember being in my house and seeing my best friend’s face on air fresheners, Hawaiian shirts and I.P.A. beer cans,” said Mr. Kahn. There were also action figures. Mr. Kahn said the pressure to produce content and the loss of control over the brand began to take a toll on his friend. “He was incredibly stressed,” Mr. Kahn said.

In mid-December, Mr. Callaghan asked for a larger portion of the Patreon earnings and to get out of his contract, which was set to expire in February 2022. A few days after the request, Doing Things locked Mr. Callaghan, Mr. Gilbert-Katz and Mr. Mosher out of the “All Gas No Brakes” social media profiles, citing a security issue.

“Andrew said this was a punishment for us not creating enough content for them and he wished he never signed the deal,” Mr. Kahn said.

In February, Doing Things sent a letter to Mr. Callaghan saying his job would be terminated if he didn’t produce two pieces of Patreon content by March 1. The company fired Mr. Gilbert-Katz and Mr. Mosher, and tried to get Mr. Callaghan to hand the show over to a new host. He refused, and on March 4, he was fired too.

“We’re really bummed it didn’t work out with Andrew,” Mr. Hailey, the C.E.O. of Doing Things, said in a statement. “He was the heart and soul of the show. It was a special moment in time and we’re excited we got to be a part of it. We wish him the absolute best and we’ll be watching along with everyone else for where he goes next.”

Mr. Callaghan is still working on the longform project with Abso Lutely and Doing Things. And he’s assured his fans there’s more to come.

“This is not the end,” he wrote on Instagram Stories last week. “It’s a new beginning to a truly independent and bright future for all of us. Stay tuned. Love y’all.”