The most precious thing on earth is, well, earth. While Haute Couture Fashion Week might seem like the last place you’d expect to see upcycling, the realities of climate change have made the ultimate luxury environmental awareness. That seemed to be a message of the Fall 2021 haute couture collections, which featured lots of vintage denim and other fabric reuse.

Upcycling, the process of using existing materials for a new purpose, has been percolating through pandemic ready to wear collections as Covid-19 shutdowns forced designers to use deadstock materials they had on hand. They simultaneously became aware of the environmental benefits of doing so. And this week in Paris, the practice of upcycling became de rigueur amongst fashion’s highest echelon too.

Haute couture is astronomically expensive because it’s fit and sewn by hand for individual clients by highly trained artisans. It comes from the tradition of royal dressing where grandeur telegraphs social dominance, so these garments are typically made from expensive fabrics such as tulle, organza and chiffon and finished with feathers, fur, lace, and detailed embroideries that only add to their opulence. 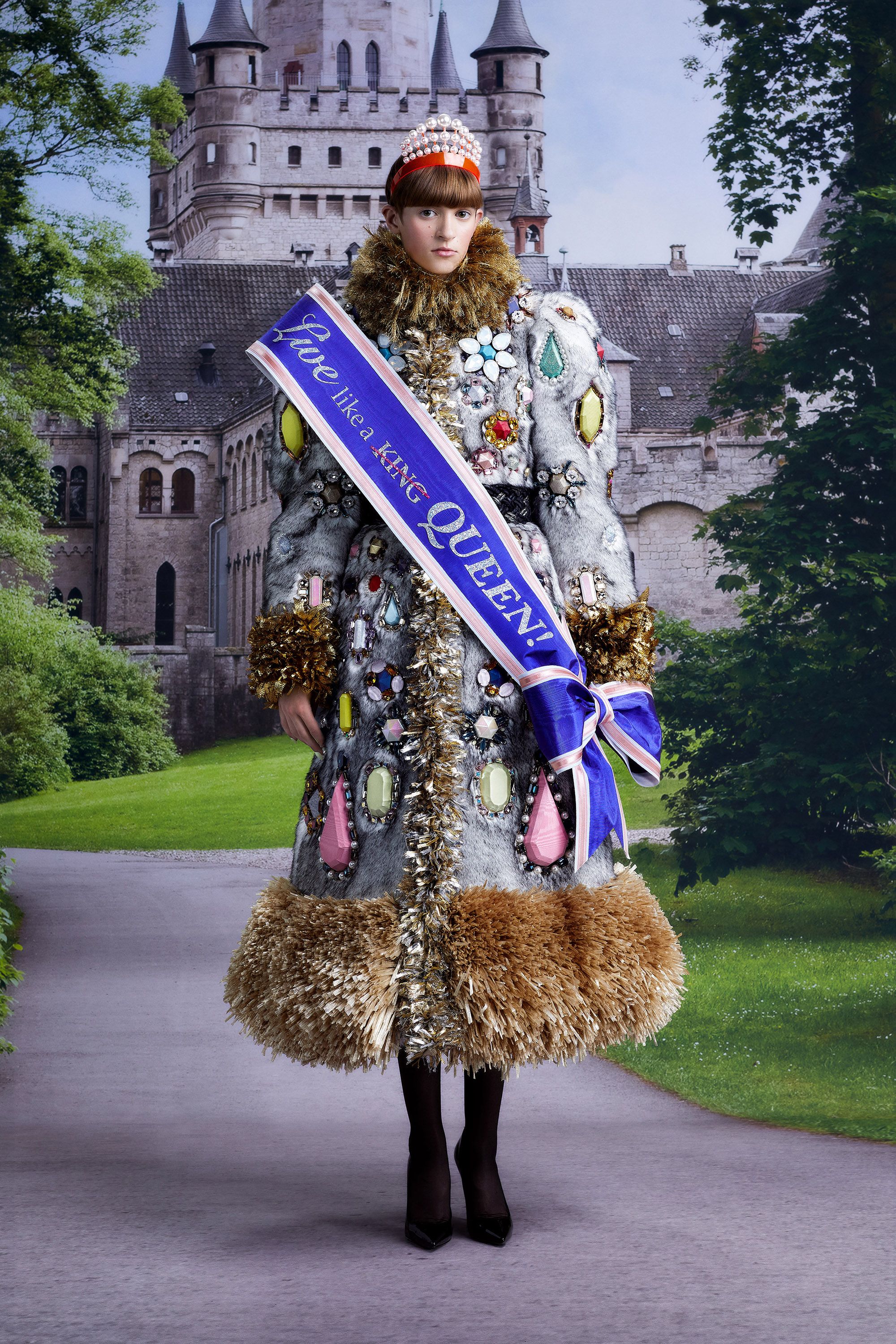 Viktor & Rolf designers Viktor Horsting and Rolf Snoeren turned that idea on its head with their collection titled the “The New Royals” that featured stately dresses, coats, and sashes patchworked from polyester, paste jewels, and biodegradable deadstock faux fur, liberally frosted with what the designers called “reignited” Swarovski crystals. “The Swarovski reignited crystals collection allows us to give unused crystals another chance to be adored,” the duo explained of their deadstock rhinestones. 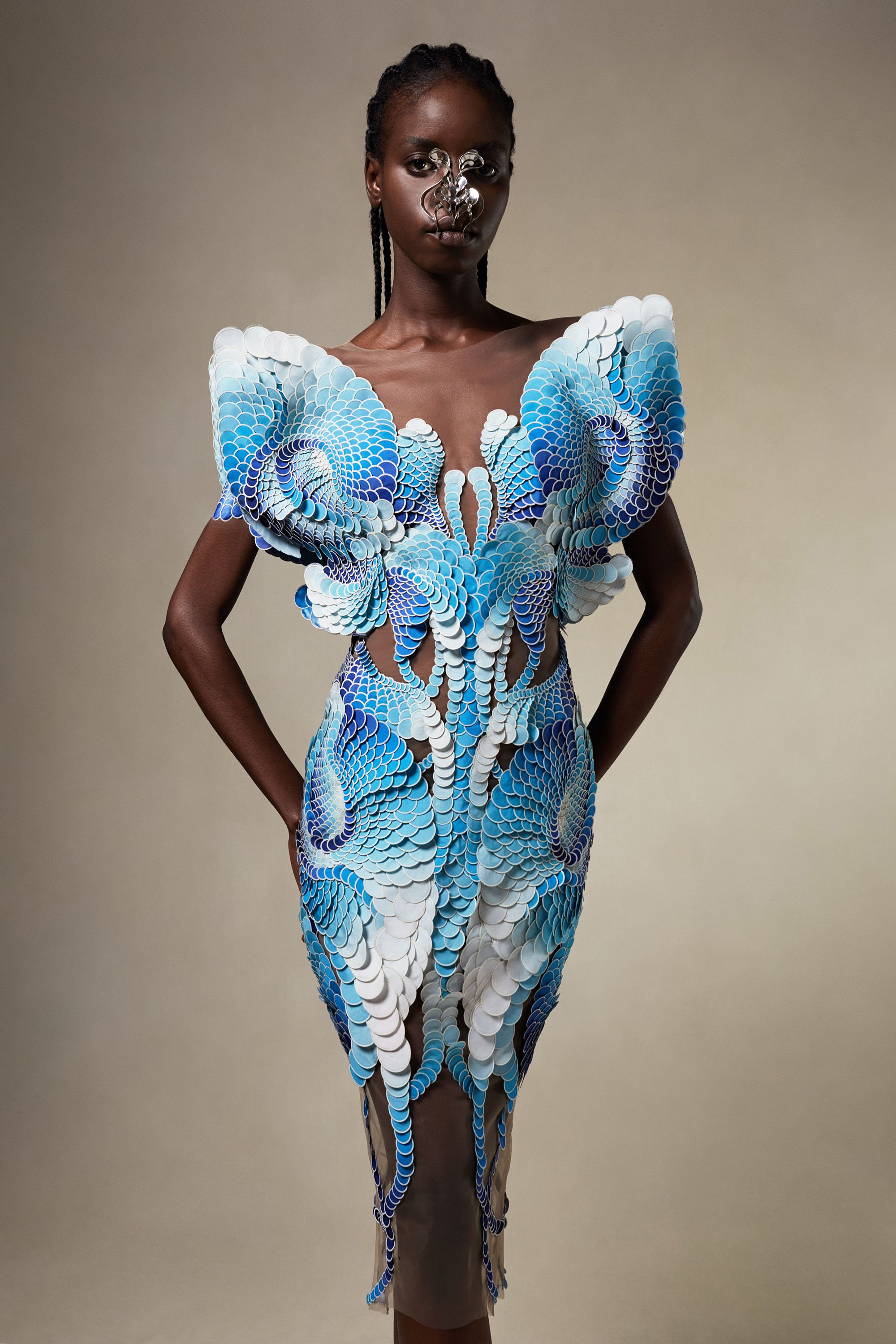 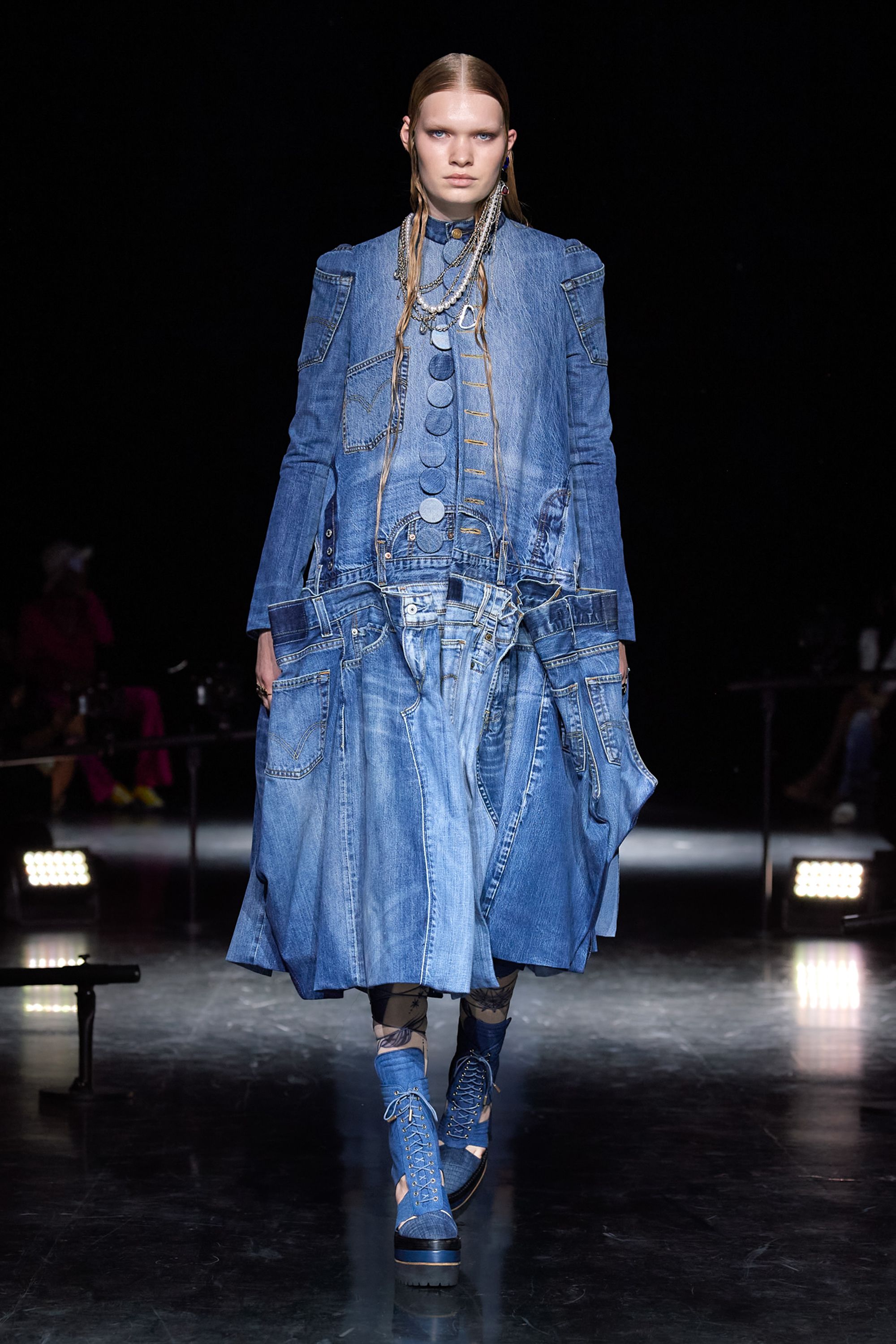 Blues—as in denim—was also a major theme of the collections. While good old American five pocket jeans may not seem the stuff of haute couture, with a little help from the ateliers’ petit mains they were anything but basic. At Jean Paul Gaultier, guest designer Chitoise Abe of Sacai stitched together vintage Levi’s into a voluminous paneled skirt worn with a replica of a jacket from one of the founder’s 1994 fashion shows. 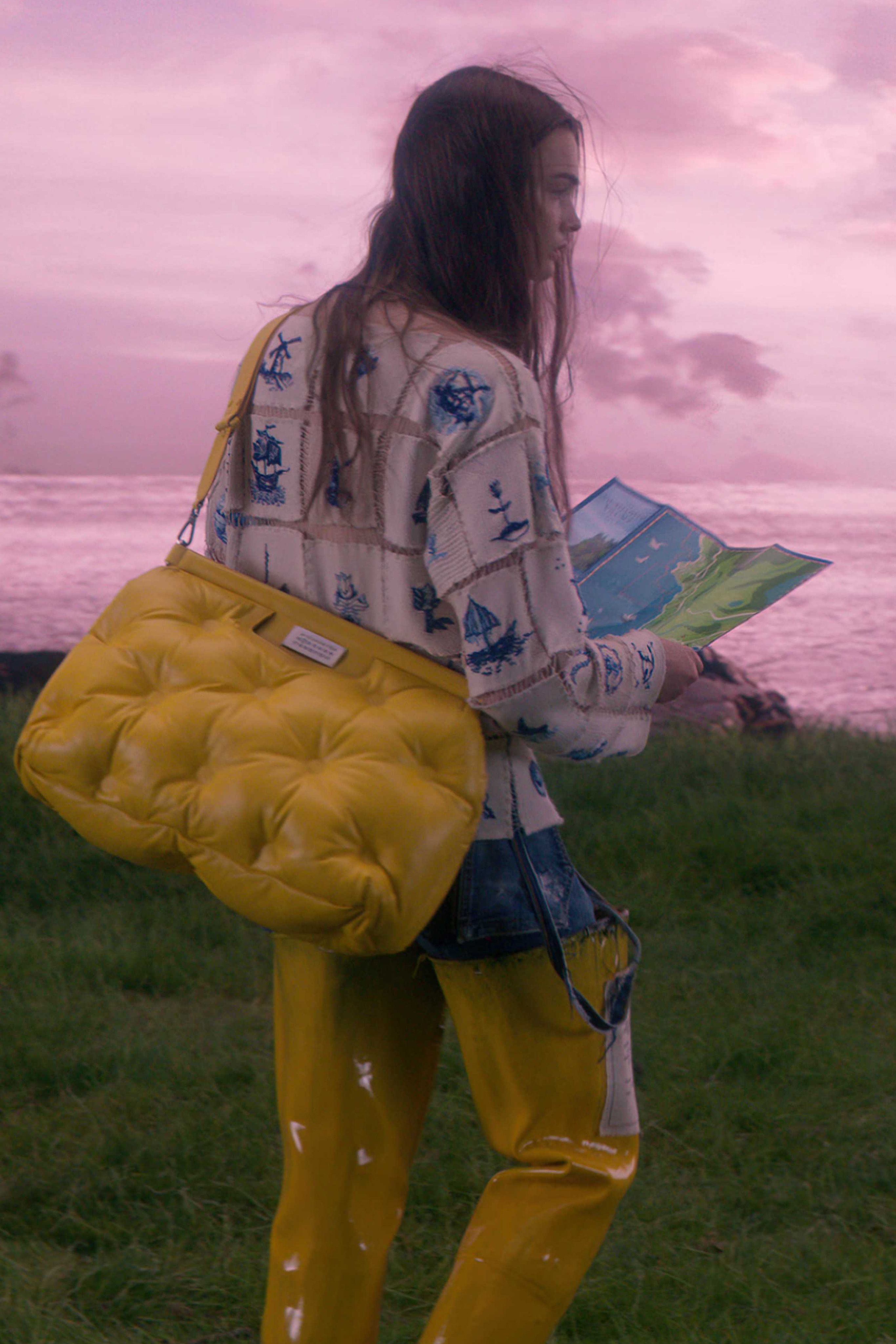 In his Artisanal collection, Maison Margiela creative director John Galliano expanded his Recicla label offerings beyond the upcycled accessories such as wicker baskets and tango shoes handpicked from vintage stores that have featured in past seasons. He patchworked together a majestic gown from vintage and antique Delft blue fabrics. Galliano also showed lots of waders over vintage denim, a material which featured in Loden coats spliced with denim jackets as well. 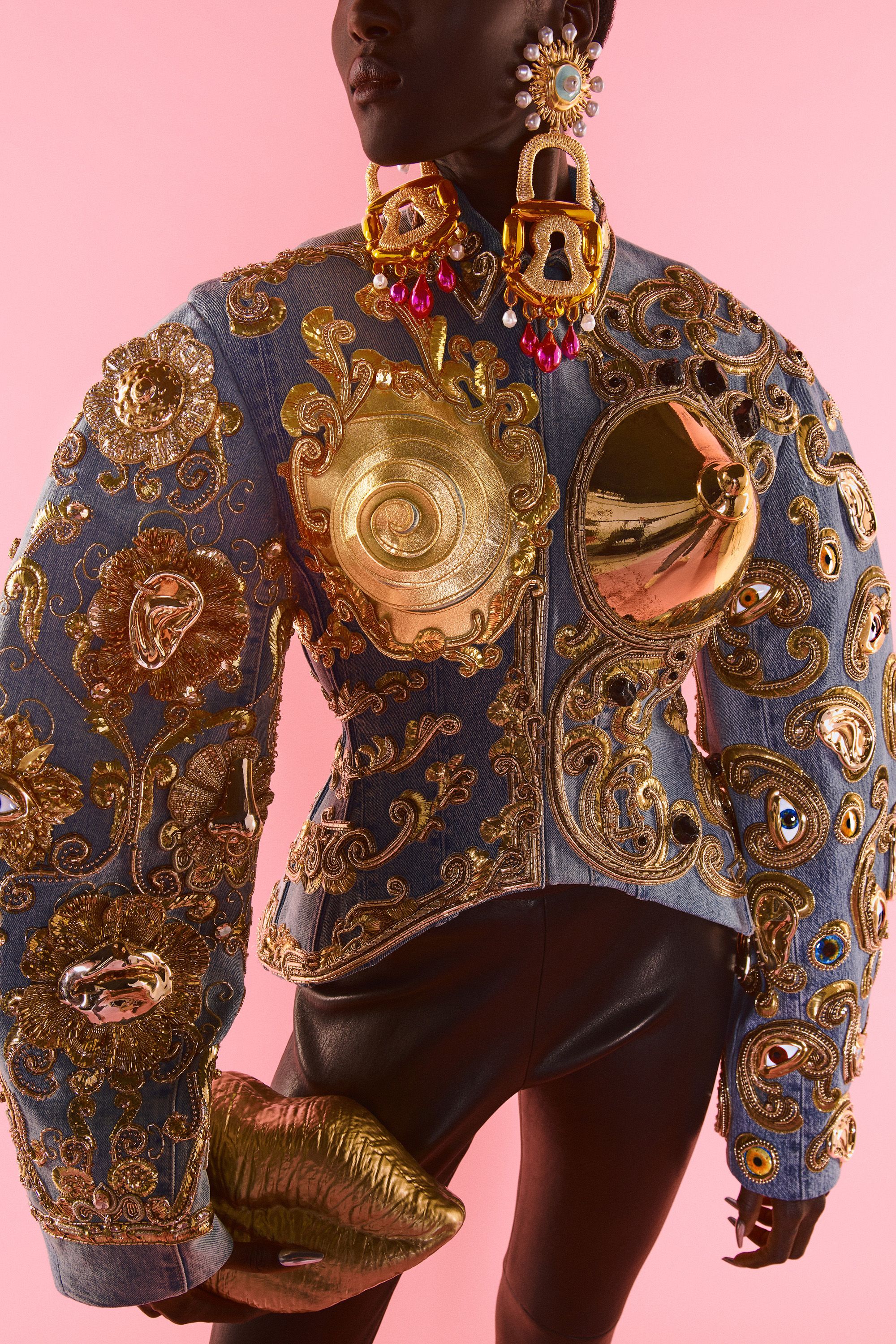 And Schiaparelli artistic director Daniel Roseberry put a surreal spin on old jeans via a dramatically sleeved denim jacket embroidered with gold lips, ears, and ceramic eyes.“Here’s what I want: No more cookie-cutter fashion,” Roseberry wrote in his show notes. “I hope this collection reminds everyone who encounters it of the sheer delight that fashion can bring us in hard times, and with it, the promise of more joy when the clouds part. Give me more fashion. Give me more hope.” Amen to more beauty—and less garbage.