After our article on Jan. 19 about three marriages from a Harvard Law School section, Richard J. Lazarus wrote The Times. Professor Lazarus, who also teaches first-year law students at Harvard, applauded the newlyweds and his friend and colleague Jon Hanson, the head of that featured section (1L, Section 6). 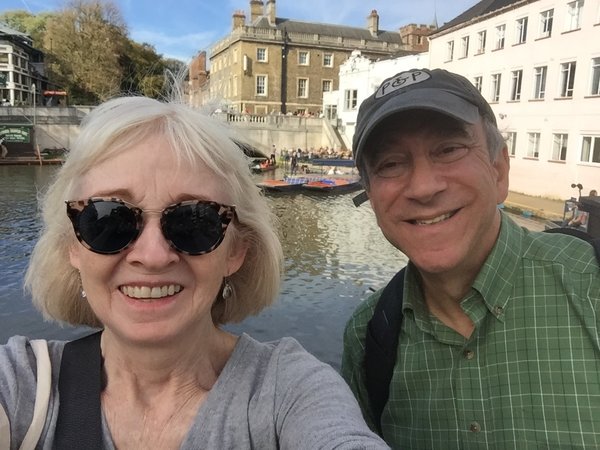 But as a member of the Class of 1979 and as someone familiar with all things Havard Law, Professor Lazarus also wanted to alert us to an even higher romantic bar set by 1L, Section 3: Six couples not only married from that section, but — drum roll please — they are all still married.

“I am happy to report that, 40 years later, all six couples are still intact,” said Professor Lazarus, who refers to that section as “the love section.” (Professor Lazarus was a student in Section 4 that year.)

It’s important to note that in 1979 women made up only about a fifth of the 140 or so students from Harvard’s 1L, Section 3 — still, a significant increase from when Justice Ruth Bader Ginsburg was one of nine women out of 500 in the Class of 1954.

“Being guys we were very conscious of who the 20 women were,” said George Berman, who married Regina Roman, at the Harvard chapel in July 1980, a year after their graduation.

Mr. Berman noticed Ms. Roman the first day of school, but it would be weeks before he actually spoke to her, and then months later until he asked her out.

He admired her independence and determination, and that of her friends. “They took on this task, and damn it, they had the same attitude as pioneer women who took wagons to Oregon,” he said.

“You certainly have a lot in common,” Ms. Roman said of their relationship. “Harvard was a petri dish.”

The couple raised two sons in the Boston suburbs, and five years ago, moved to downtown Boston. Ms. Roman offered a word of advice for lawyers marrying each other: “Don’t work together in the same firm.”

“I can’t remember if I met Regina first or Dan,’’ Ms. Pilzer said. “We signed into a book of all new students. It was multivolume. Everybody signs just their signature in case you got famous.”

Mr. Waters recalled signing the book right after her.

“We were one of the first classes to have a substantial percentage of women — it was four to one,” Ms. Pilzer recalled. “Harvard already did the selecting we looked for. It was just an early example of assortative mating.”

The couple now live in Rockport, Mass. Ms. Pilzer, who stayed home with their two children for five years when they moved to London, returned to law when she was 50 after passing Britain’s solicitor’s exam. Mr. Waters had been the head of enforcement for the British financial services regulator.

Their joint advice to other lawyer couples: “Don’t behave like lawyers. Remember you’re not adversaries. Don’t argue your point unless you have to. Legal training is not designed for all aspects of human relations.”

Don Scherer recalled meeting Lee Hanson the first day of law school, and they married 10 years later, in 1986. They now have two daughters and a son and live in Orinda, Calif., in the San Francisco Bay Area.

After school, they traveled around the world for three months, knowing that at the end they would have jobs 6,000 miles apart — she in New York and he in Honolulu. Ms. Hanson was later transferred to Tokyo.

“Whenever she traveled back to the States, she stopped in Hawaii, maybe partly to see me,” he said of their friendship at that time.

Mr. Scherer practiced business law, while Ms. Hanson went into investment banking until 1995. He gradually wound down from law, starting in 2001, to stay home with their children, then 12, 9 and 8. Now he is fully retired, and she continues to travel around the country as an executive-search consultant.

The relationship between Bob Sullwold and Jane Cosgriff Sullwold started off in a less than friendly way.

In torts class, Ms. Sullwold was assigned to a seat in the row behind Mr. Sullwold. “I spoke to my neighbors,” she said. “He turned around and said ‘I want to hear the professor and not you.’”

The couple began dating in the spring, and after law school settled in San Francisco. They are both originally from the Midwest — she from Fargo, Minn., and he from Toledo, Ohio.

Mr. Sullwold wanted to stay in San Francisco. “I made the case San Francisco wasn’t the Wild West,’’ he said.

The two became officially engaged the day after taking the bar. Today they live in Alameda, Calif.

The most difficult part of their relationship was getting through the long hours at work, Ms. Sullwold said. It helps, though, that the two have remained on the same wavelength. “When an issue comes up, an important issue, we’re looking at it in the same way, but differing at the margins,” he said. “Should we give more to AIDS or the food bank. The underlying theory the same.”

Common interests and backgrounds brought together Dveera Segal and Bradley Bridge, who have three children. The pair crossed paths outside a small legal methods class a few days after school began. She had transferred to that class from a later section on Friday so she could observe the Sabbath in time.

“She commented on my T-shirt,’’ he said. It simply said UAHC Camp Swig staff, which she knew stood for Union of American Hebrew Congregations. “She recognized that I was Jewish and so was she. That was the entry point. I’d never throw that shirt away.”

They were married Aug. 5, 1979 after taking the Chicago bar exam.

“Dveera’s my best friend and always has been,’’ Mr. Bridge said. His advice: “Respect the person and their judgment.”

Mr. Bridge’s roommate, Rick Judd, also met his wife in Section 3. “I knew who Rick was,” said Linda Agerter, recalling that the two met at a winter mixer their first year. “He had a Jewish Afro a foot all around. He wore a poncho, and was called on a lot. He might have looked a little odd, but had a lot of interesting things to say in class.”

“At some point Rick invited me to his place for dinner,” she added. “I was surprised he was going to cook dinner. I never met a man who knew how to cook.”

They were married in May 1984, and now have two sons, and live in Berkeley, Calif.

“I don’t know how else to describe the secret sauce,’’ Ms. Agerter said. “Negotiation and problem solving.”

As far as Professor Lazarus who wrote us, he, too, married, but not a lawyer, or so he thought. “I am happily married since 1983, but not to an H.L.S. classmate. My plan was not to marry a lawyer and I married an economist, Jeannette Austin, but then she went to Northwestern law school after we were married.”

(Oh, and there was another classmate in Section 3 worth noting, the professor said: John G. Roberts Jr. The chief justice of the United States “married a very wonderful person, and attorney,” but she was not “an H.L.S. classmate,” said Professor Lazarus.)