Four years after packing its canvas tote and leaving the country with its tail between its cargo shorts, US fashion giant Gap has returned to the Australian market, bringing Banana Republic along for what will hopefully be a smoother ride. If at first you don’t succeed hope that they buy and buy again.

Banana Republic is now available online and in select David Jones stores while Gap has dipped its toes back into Australian waters with a website, taking a different strategy to the six stores it launched nationally, following an unsuccessful partnership with the Oroton Group in 2013. 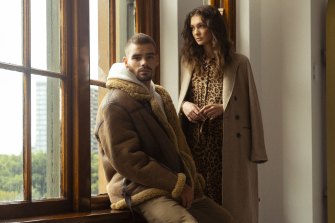 Models Tayla and Charlie wear Banana Republic, which is finally launching in Australia online and at David Jones. Credit:Dominic Lorrimer

“Thanks to this wonderful thing called Google Analytics, we know that there is a demand for these brands in this market today,” says Gabriel Bastien-Dietrich, brand manager for Gap and Banana Republic at True Alliance, the labels’ new Australian distributor. “We know that there are 20,000 searches for Gap each month in Australia. A lot of these are from millennials that don’t see it as a boomer brand or passé.”

Founded in 1969, Gap was the go-to store for bright basics in the US during the ’80s and ’90s, with groundbreaking advertising campaigns featuring Madonna, director Spike Lee and even a self-portrait by Chanel designer Karl Lagerfeld in 1993. Actress Sharon Stone raised Gap’s profile on the red carpet, mixing the brand with luxury pieces at the Oscars in 1996 and 1998.

Following strong international competition from Zara and Uniqlo, Gap faded from fashion favour but recently reclaimed credibility with collaborations, such as a 10-year deal with rapper Kanye West’s brand Yeezy, announced in 2020. West worked at a Chicago outpost of The Gap as a teenager and declared in a 2015 interview that he would “like to be the Steve Jobs of the Gap.” 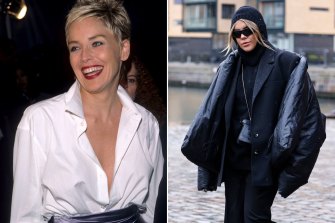 “A lot of the collaborations will be approached with a domestic market first,” Bastien-Dietrich says, meaning that US customers will have first dibs. “Yeezy Gap is available, as well as the Demna collaboration, to ship to Australia… we will be able to offer most collaborations to customers here whenever relevant. Some are very obscure and don’t resonate with our market.”

Without the heat of Kanye West and French luxury brands, Banana Republic requires a different approach for Australia, which is why it appears on the racks at select David Jones stores.

“One of the key factors with Banana Republic is the quality of the product,” Bastien-Dietrich says. “You can’t tell how wonderful the hand feel is, how thick the cottons are and the luxury of the cashmere, by looking online. This will help the consumer build trust with the product.”

Mel and Patricia Ziegler co-founded Banana Republic in 1978 using military surplus to create safari-inspired looks for Californian customers. The company was bought by Gap in 1983 and rode an initial wave of success with shoppers keen to emulate the style of Harrison Ford in Indiana Jones and the Temple of Doom.

While maintaining its commitment to neutrals and animal prints, Banana Republic has expanded into the workwear and occasion wear categories, which are already well-catered for in Australia.

“It’s a spot where there are a lot of domestic brands,” Bastien-Dietrich says. “Country Road is certainly top of mind. But there are also customers who want to access quality, fashion pieces at a similar price point that are not as widely spread across the market.”

With US brand J.Crew having filed for bankruptcy protection during the coronavirus lockdowns and disappearing from the racks at David Jones, Banana Republic fills a gap in Australian customers’ enduring attraction to Americana.

“We are really conscious of brands that have a point of difference and a track record,” says Chris Wilson, general manager menswear, David Jones. “It’s collegiate, contemporary and classic which is a favourite men’s and women’s style, time and time again. We already have Polo, Tommy Hilfiger and Calvin Klein in this space so this complements those brands.”