Josh Reynolds, who works in tech sales and lives in American Fork, Utah, got vaccinated without telling his extended family. Two weeks after his second shot, in the middle of April, Mr. Reynolds, 29, took his wife and younger brother, both also vaccinated, and 6-month-old daughter, to New Jersey. They rented a car at the airport and pulled up outside the house of his uncle, whom they hadn’t seen since before the pandemic.

“We lost my dad two years ago, and we’ve always been close to that particular uncle,” he said. “We chat every day, and he’s like an older brother.”

“He hadn’t even met my daughter,” he added.

They waited for 45 minutes for him to get home, hid on the street, and then rang the doorbell.

“The surprise was so much better than I could have thought,” said Mr. Reynolds, who had imagined the moment many times before it happened. “My aunt is crying. My cousin ran up and took my daughter out of my hands. The puppy bolted out the front door.”

This being 2021, he captured the entire moment on his phone and shared it on Twitter.

“With the absolute awful year everybody has had with the pandemic, it almost feels like there is no end in sight,” he said. “To show people, ‘Look, we are vaccinated, we can see our family again,’ I felt like the world needed to see this.”

Videos of fully vaccinated people surprising their loved ones are making the rounds on social media. The clips fall somewhere between “Candid Camera” and military homecomings, and show family members spontaneously laughing, crying, hugging and wrapping their heads around the fact that someone they haven’t seen in over a year is there in the flesh.

People’s motives for posting them are pure. Some want to share their bliss; others want to show the power of vaccines. These surprises take work to pull off, and a friendly competition has even emerged.

“I don’t want to put one video about the other, since they are all so happy, but selfishly I think ours is the best,” Mr. Reynolds said. “My uncle played basketball in college. To see him get off the ground that high and hear his voice scream so high, it was incredible.”

The morning that Grant Tosterud, 26, a meteorologist in Albuquerque, was embarking on his surprise expedition, he saw someone else’s on social media. “I don’t remember the specifics but this guy walked into his house, and his parents were doing something inside and flipped out,” he said. “It made me more nervous that my setup wasn’t going to work.”

He had put a lot of thought into his plan. The day his second vaccine was scheduled, he booked a plane ticket to Fargo, N.D., where his mother lives. He arranged for a family friend to pick him up for the airport so he could knock on the door and take her completely off guard. “I know how much my mom misses me,” Mr. Tosterud said. “A surprise would mean a lot more and would be a lot more fun than her expecting me to come.”

Nothing went as planned. She wasn’t home so he waited 15 minutes on the patio. “Luckily the sun was shining,” he said. Then she walked up to the house, bags in hand after running some errands. Still, the moment was perfect.

“I am disappointed with myself, because I stopped the video so I could give her a hug, but I should have kept rolling,” he said. His viewers — between Facebook and Twitter there are around 5,000 of them — missed an embrace that actually lasted five minutes.

It’s become Meryn Hayes’s favorite pastime to watch these types of videos. “I see them on Twitter scrolling through my feed. I see them on TikTok,” she said. “I would say over the last two to three weeks they’ve started becoming more frequent.”

“I see two or three every day,” she added. “If they stop coming up, I’m going to find them because they make me so happy.”

She has cried at every single one. “Part of this is imagining myself as a parent who hasn’t seen my child in a year,” said Ms. Hayes, 33, a producer at an animation studio in Raleigh, N.C. “Seeing people come back together, it makes my heart swell.”

Even some people who consider themselves generally private are sharing the moment social media, an indication of how all-encompassing this moment is.

Debbie Lowenthal, 50, has been separated from her 77-year-old mother by over 2,500 miles during the pandemic. She works for a hospital and nursing association in Juneau, Alaska, and her mother lives alone in Pleasanton, Calif. “In the spring of 2020 she would tell us she thought she might die alone, that she would never seen us again,” Ms. Lowenthal said.

So after she and her college-age daughter were vaccinated, they planned a surprise visit. “I didn’t want her to worry about us coming or having to clean her house,” Ms. Lowenthal said. “Or what if something happened and we couldn’t come? She would be so disappointed.”

Ms. Lowenthal wanted to post the video on social media to make a point about vaccines. “I wanted people to know that if you get vaccinated you can go visit a family member without a mask,” she said. “It’s an issue that is now political, which really saddens me.”

But as a private person who hardly ever posts she was nervous. “I sent it to one friend and said, ‘Do you think I should post it?’” Ms. Lowenthal said. “She said, ‘I’m bawling, yes, show other people.’ I did it. I haven’t really even watched the whole thing. It’s too emotional for me, and I don’t like seeing myself on video.”

People posting videos of surprise visits say these reunions are milestones as pivotal as the first day of school or an engagement.

Ashley Stafford, 32, a dance teacher and personal trainer in Manhattan, is engaged to Sergio King, a 28-year-old actor. Last week, with Mr. King fully vaccinated, she arranged for her fiancé’s two sisters, Chantal and JoLyn King, to surprise him at an Airbnb near New Haven, Conn.

“The video I have, it starts when he is unlocking the door to the Airbnb. He sits his bag down, looks around, and hears the closet door open,” she said. “You can see his body language toughen up, but then one of the girls comes out of the closet and the other out of the bathroom. There is so much joy.”

“It’s important to document this moment,” Ms. Stafford said. “We are all going to look back at the pandemic, and at least now we have some joy from it. We now have videos we can watch over and over again.” 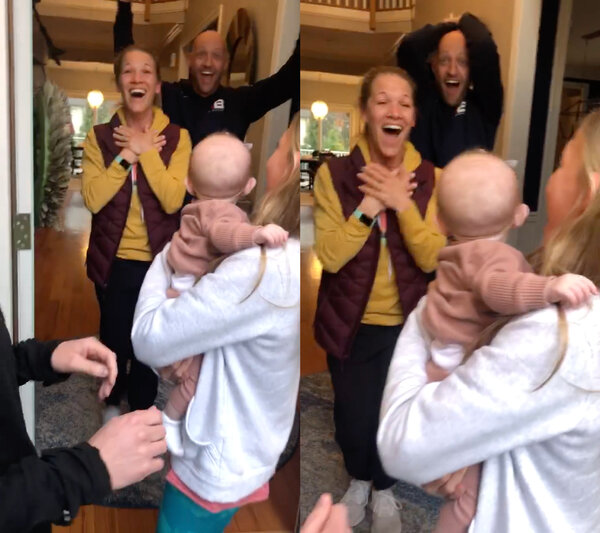