When Chuh A first laid eyes on Rex Ny nearly two decades ago, he just knew it was love at first sight.

He was a 14-year-old who had arrived in the United States just a year earlier, transplanted from Kontum, Vietnam, to Greensboro, N.C. Ms. Ny, who was 12, was a fellow immigrant from Kontum; she had arrived at the age of 4.

“I got my eye fascinated,” he said.

The two shared a very special bond: They’re both Montagnards, the indigenous people of Vietnam’s Central Highlands, and the children of those who had aided American troops during the Vietnam War before emigrating to the United States.

Vietnam has long discriminated against Montagnards for their ethnicity and Christian religion, according to human rights groups, and their American alliance during the war only intensified this persecution. Tony Ngiu, Mr. A’s 73-year-old father, spent nine years in hard labor at a Communist re-education camp after the war before making it to the United States. Tens of thousands of Montagnards assisted American soldiers. An estimated 3,000 took refuge in the United States, according to the government-funded Voice of America, settling largely in North Carolina.

Ms. Ny, who is now 31, did not match Mr. A’s immediate affection when they first met. “It was just playing to me,” she said of their initial shared moments. “We would go play tag, climb the trees, we would go swimming.”

She would decline his first three date invitations. “She didn’t pay attention to me,” recalled Mr. A, who is now 33.

After not speaking for a year, Mr. A started politely peppering her with “corny” e-cards and messages from AOL Instant Messenger. She was amused and agreed to go out with him when he eventually asked again. He was now 16; she was 14. And they have remained committed to each other ever since.

In 2005, Ms. Ny, then a high school senior, became pregnant with their first daughter, Nya, now 13. The couple got engaged that same year.

“After that, we just stayed together forever,” Ms. Ny said. They have three other daughters: Ly-Yhang, 12; Jolie, 8; and Evangeline, 6. 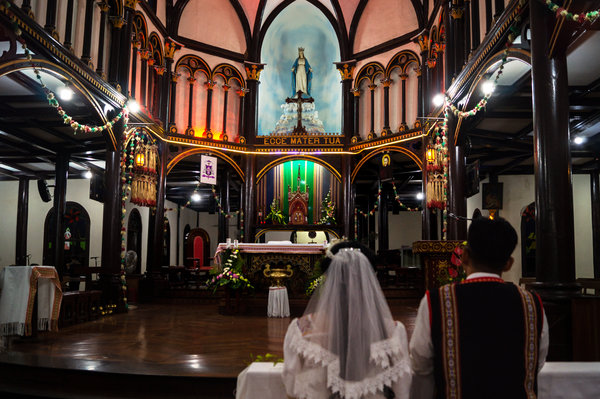 Mr. A supported the family by working service jobs for companies including Golden State Foods and Ross Stores. Ms. Ny works intermittently as a manicurist.

Sustaining their family at home and sending money back to relatives in Vietnam forced them to put off a wedding. It also motivated Mr. A to make an ill-advised and life-altering decision.

In 2013, he opted to “do something quick, a quick drop” and was subsequently convicted of trafficking ecstasy. He spent more than three years in state prison. The conviction, although his first, was an aggravated felony and invalidated his green card, which granted permanent residency in the United States, rendering him eligible for deportation.

Because Montagnards had long been unofficially exempt from deportation, Mr. A believed he would return to his American life after serving his prison sentence. But Immigration and Customs Enforcement, or ICE, detained him in June 2016. After a 13-month detention, ICE deported him in July 2017 to Vietnam.

Ms. Ny and the couple’s four children are American citizens and stayed in North Carolina.

But Ms. Ny remained committed to the couple’s engagement, despite suggestions from friends and family that maybe she shouldn’t.

On Jan. 26, the couple finally married in a 4:30 a.m. Roman Catholic Mass in Kontum. The ceremony was at the Immaculate Conception Cathedral, a century-old building known as the Wooden Church. As cool winds whipped through the city’s streets, more than 200 worshipers braved the dawn, packing the church’s pews for a quietly joyful ceremony. The couple later hosted a raucous afternoon reception at Ms. Ny’s cousin’s home in a Montagnard village on Kontum’s outskirts.

The couple has fought for their relationship since Mr. A’s deportation, pushing back against vast physical separation and 12-hour time difference. They FaceTime as much as possible, aiming to ensure that Mr. A’s children “don’t miss out,” as he put it.

The couple had never expected to be separated. They both grew up in a Montagnard-heavy community in North Carolina, where deportation was unheard-of. Citizenship, Mr. A figured, wouldn’t have provided anything more for him than a green card. And by the time his parents were pursuing and achieved citizenship, he already was working full time. Ms. Ny became pregnant around this time as well.

Before President Trump took office, Vietnam refused to repatriate Montagnards. Mr. A, when detained by ICE, expected like all those Montagnards before him to be released after six months, in line with a 2001 Supreme Court ruling. But amid the Trump administration’s increase of Southeast Asian deportations, Vietnam acquiesced to American pressure and, in 2017, began to accept Montagnard deportees. Mr. A is one of the first to return to Vietnam.

When asked why he didn’t pursue citizenship as his parents did, he said: “I was trying. At that time I don’t have money; I wasn’t thinking. I was distracted by other things that I had done, like working and trying to support my family.”

(Mr. A’s three brothers never left Kotum Province. Chuh A, who is the youngest sibling, was the only one who was underage, and therefore, able to emigrate with his parents.)

After his deportation, Ms. Ny recalled a conversation with Mr. A’s parents. “His mom and dad told me: ‘Our son messed up. You don’t have to stay with him. You can move on with your life.’ But how can I just do that?” she said. “If I love someone, I stay with that person, even through wrong or right, though life and death, even through sickness or health. You still stay with the person you love. That’s what I believe.”

In January, Ms. Ny and the couple’s four daughters made their way to Vietnam for a monthlong visit culminating in the wedding ceremony.

Mr. A’s mother, Chok Y, 72, traveled from North Carolina for the wedding. His father, Tony Ngiu, 73, stayed behind, unable to muster the necessary funds. Ms. Ny’s father, Antone Thinh, 71, attended, but her mother, Die Y, 68, stayed in the United States, preferring not to return to Kontum.

“It makes me very happy, of course,” said the groom’s mother, who dotes on everyone in her orbit, plying them with food and warmth. She is optimistic and grateful, despite her son’s deportation. “I love everything that God give my son and daughter-in-law.”

The bride and groom are similarly aware of their good fortune relative to that of the impoverished Montagnard community. They invited the entire village to their reception, hoping to not only celebrate with but also give back to their ethnic kin.

“In America, people can get food easily,” Ms. Ny said. “If you want to compare to Vietnam, there are kids on the street.”

Their guests feasted on freshly slaughtered and prepared pork and beef, along with an array of vegetables. The couple, in a Montagnard tradition, greeted every guest at the home of Ms. Ny’s cousin. Soon after another tradition — of mandatory intoxication — began.

Friends and family positioned themselves throughout the home’s porch, sitting around jugs filled to the brim with homemade rice wine. The couple made the rounds, stopping repeatedly at each jug, whose guardians forced the newlyweds to guzzle wine through a straw. When the couple said they’d had enough, they enlisted the help of friends and family.

Mr. A and Ms. Ny, despite spending a majority of their lives in the United States, speak various Montagnard languages, along with English and Vietnamese, and care deeply about their increasingly threatened community. (He speaks Xe Dang, Bahnar, and Ro Ngao; she speaks Ro Ngao and Bahnar.)

“This is our culture and background,” she said. “When our kids see this, they know that this is their background as well, that they’re part of this.”

Nya, 13, and Ly-Yhang, 12, the couple’s two oldest daughters, don’t speak any Montagnard languages, but nonetheless, appreciate their parents’ union and their own heritage.

“I’m happy for them, but not for me,” Nya said semi-jokingly of her parents. Neither she nor Ly-Yhang like wearing dresses — let alone boxy Montagnard dresses — or crowds, both of which are forced upon them for the wedding. (“They’re introverts,” Ms. Ny explained.)

But Ly-Yhang, when speaking of her parents, momentarily allows the veneer of matrimonial normality to slip. “I’m excited for Mommy and Daddy to get to live together,” she said before realizing and correcting her error: “To get to be together forever.”

Evangeline, the pair’s 6-year-old daughter, seemed to intuitively know to make the most of the fleeting moments with her father, rarely venturing from his side. When she pulled on his clothes, hoping for an embrace, he leaned down, smiled and picked her up, gently cautioning: “A few kisses, and then you go with your sisters, O.K.?”

Ms. Ny, looking on, sighed and spoke not only for her daughter but seemingly for herself, yearning for a time when normality was anything besides familial separation: “She doesn’t want to leave.”

On Jan. 31, Ms. Ny and the couple’s daughters returned to their home in North Carolina. Mr. A remained in Ho Chi Minh City, the former South Vietnamese capital that was known as Saigon, where he lives and works at a restaurant.

It is unlikely that Mr. A will ever again step foot in the United States, the country that his wife, daughters and parents all call home.

“Chuh has a slim chance of returning to the United States,” said Tin Thanh Nguyen, his pro bono lawyer in North Carolina. “Chuh’s only option is pursuing post-conviction relief in Wake County, North Carolina to challenge the criminal conviction for which he was deported.”

Mr. Nguyen says he is pursuing this strategy.

For now, the longtime partners — and newlyweds — remain physically separated. “It’s all right,” Ms. Ny said later of life in North Carolina after returning there. “I miss my husband.”

Where The ceremony was at the Roman Catholic Immaculate Conception Cathedral in Kontum, known as the Wooden Church.

East and West The couple rotated between traditional Montagnard and Western attire. Ms. Ny wore a white dress with tribal stripes for the church ceremony. She greeted reception guests in a flowing, white Western dress. Mr. A matched her in a pristine Western suit. He covered his pressed white button-down and black tie with a tribal-patterned vest during the ceremony.

Languages Mr. A and Ms. Ny understand English, Vietnamese and Montagnard dialects. They speak mostly English with their children, who still know select phrases in certain Montagnard languages, like “brush your teeth.” The church ceremony was in the Montagnard dialect Bahnar.

Homemade Feast For the reception, the couple’s family slaughtered and prepared three pigs and a cow, and served them alongside an array of vegetables.

Sign up here to receive Wait —, a weekly newsletter in which Caity Weaver investigates a question in the news and pop culture.