The cheeky parent said the girl should be happy with "a day of fun" and free ice cream, despite being owed £100 for watching her two kids. 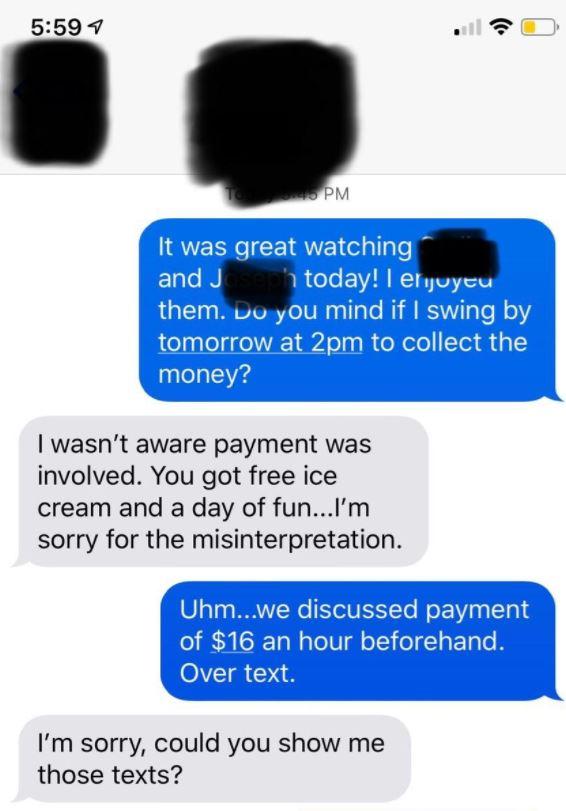 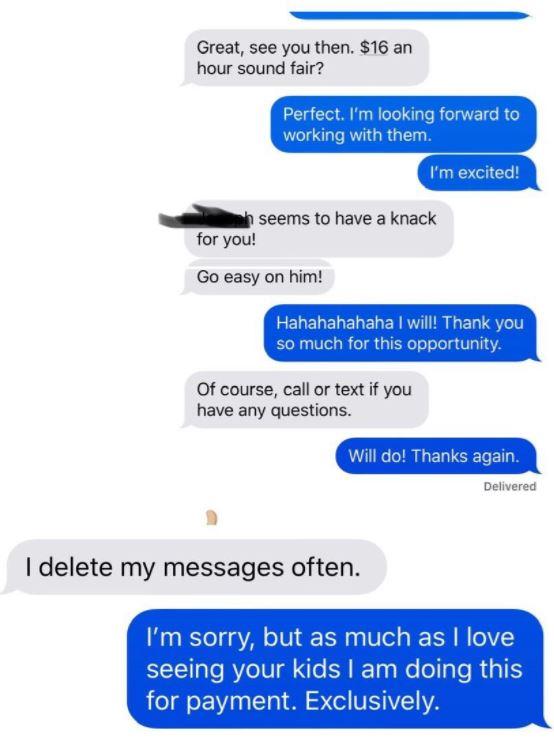 The bizarre text chain was posted on Reddit by the babysitter's sister, who revealed her sibling was called a "stuck up c***" and blocked immediately after.

It all began when she texted the mum asking: "Do you mind is I swing by tomorrow at 2pm to collect the money?"

The mum replied: "I wasn't aware any payment was involved. You got free ice cream and a day of fun… I'm sorry for the misinterpretation." 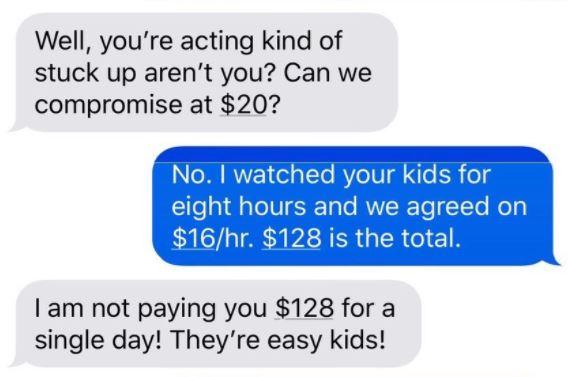 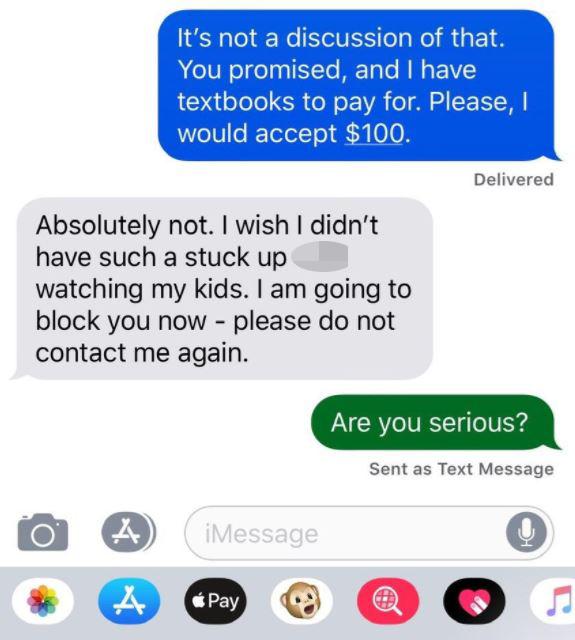 The mum asked to be shown proof of the messages and the babysitter sent her a screenshot, which clearly shows her offering £12.60-an-hour and asking if that "sound(s) fair?"

But the mum refused to apologise, simply writing: "I delete my messages often" in response.

The babysitter wasn't ready to give up yet, messaging: "I'm sorry, but as much as I love seeing your kids I am doing this for payment. Exclusively."

The shocked student said she was owed £100.70 and would accept £78.70 as a gesture of goodwill, but no less as she had textbooks to buy. 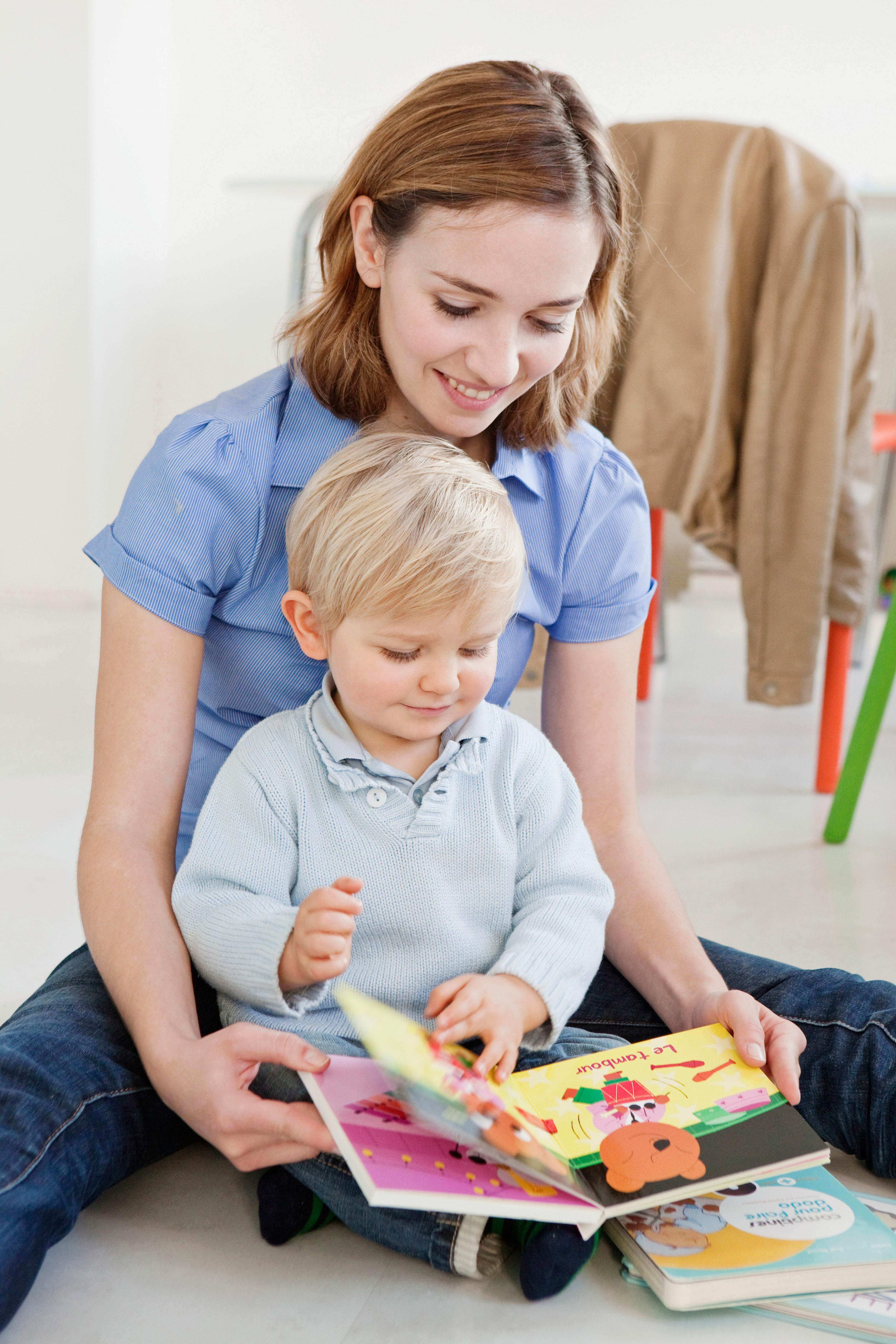 When she was reminded that she had made a promise, the mum said: "I wish I didn't have such a stuck up c*** watching my kids.

"I am going to block you now – please do not contact me again."

And she stayed true to her word, horrifying readers, who have left 4,600 comments on the thread in less than a day.

Commenters wrote: "Judge Judy would have a field day" and "please please please do not let this person get away with this."

Given that she has text message evidence, some recommended taking the mum to small claims court – for the £100 plus legal fees.

Her sister said: "She's hesitant because she thinks it's a lot of legal work for $128. She's going to talk to the husband, who hopefully is a tad more reasonable."

But others argued: "It is absolutely about the principal of the thing.

"This woman is counting on OP’s (original poster's) sister being too chicken-s*** to do anything about it and she needs to be proven wrong."

In more viral news, this renter was mocked for a bizarre list of demands for their new flatmate – who must be vegan, never eat junk food and have a degree.