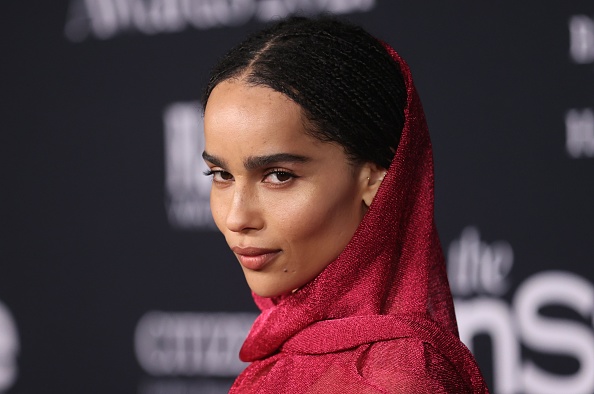 Zoë Kravitz has reflected on her decision to speak out after the drama surrounding Will Smith slapping Chris Rock at the Oscars in March, and the backlash that followed, saying she wished she had ‘handled it differently’.

Eventual Best Actor winner Smith took to the stage in fury to slap Rock after he made a joke about Jada Pinkett Smith’s shaved head while presenting an award, despite the fact that she has spoken openly in the past about suffering from hair loss condition alopecia.

The shocking incident quickly became the main talking point of the night, and Zoë was one of the first to make a public statement.

The 33-year-old uploaded photos of herself from the ceremony and the after-party on Instagram, alluding to the shocking moment in her picture captions.

Next to the first photo of herself in her blush pink Saint Laurent gown, she wrote: ‘Here’s a picture of my dress at the award show where we are apparently assaulting people on stage now.’

Next to a picture of herself in a backless white dress at the Vanity Fair after-party, she added: ‘And here is a picture of my dress at the party after the award show -where we are apparently screaming profanities and assaulting people on stage now.’

She also reportedly responded to one commentator with a simple ‘nope’ when asked if she supported Smith defending his wife in that fashion, but later deleted the posts after facing backlash.

The Batman star has now said in a new interview with the WSJ Magazine that it’s ‘a scary time to have an opinion or to say the wrong thing or to make controversial art or statements or thoughts or anything’.

The actress and director said she was ‘reminded’ that she is ‘an artist’, and that meant it wasn’t about ‘everybody loving you or everyone thinking you’re hot’ but rather ‘expressing something that will hopefully spark a conversation or inspire people or make them feel seen’.

Being frank in the difficulty surrounding the charged situation, she admitted: ‘I’m torn about what to say right now, because I’m supposed to just talk about it; I have very complicated feelings around it.

‘I wish I had handled that differently. And that’s OK.’

In July, Smith released a surprise full video apology for his actions, chiefly to comedian Rock, his mother and brother Tony, as well as to Jada and his family for the impact that it had had on them.

The Hollywood star, who resigned his membership from the Academy after the incident, said his behaviour had been ‘unacceptable’ and told Rock that he was ‘here whenever you’re ready to talk’.

Explaining that he wasn’t going to ‘try to unpack’ what happened in the moment right now, he added: ‘But I can say to all of you – there is no part of me that thinks that was the right way to behave in that moment.

‘There is no part of me that thinks that’s the optimal way to handle a feeling of disrespect or insults.’

It has since been claimed that Saturday Night Live alumnus Rock has ‘no plans’ to get in touch with the Wild Wild West star.