Wishing her ‘Dune’ co-star a happy birthday, the ‘Euphoria’ star posts a throwback photo from behind the scenes of an Entertainment Weekly cover shoot which features the actor acting silly.

AceShowbiz –Zendaya Coleman just shows her close relationship with Timothee Chalamet as she pokes fun at him while wishing him a happy birthday. Helping her “Dune” co-star celebrate his 27th birthday, she shared a hilarious photo of the Oscar-nominated actor.

The two-time Emmy Award-winning actress posted the birthday tribute to Timothee on her Instagram Story. On Wednesday, December 28, she uploaded a throwback photo from behind the scenes of an Entertainment Weekly cover shoot last year.

In the image, Zendaya looked serious as she was trying on some bracelets to complete her look for the photo shoot. Meanwhile, Timothee could be seen acting silly, smiling with his tongue slightly out, behind her. “Happy birthday to this kid,” she captioned it.

Timothee has also received a birthday tribute from actress Kiernan Shipka, who co-starred him in the 2015 film “One & Two“. The “Mad Men” alum posted on her Story a throwback photo of them dressing up while standing on the sidewalk and writing, “hbd @tchalamet legend.” 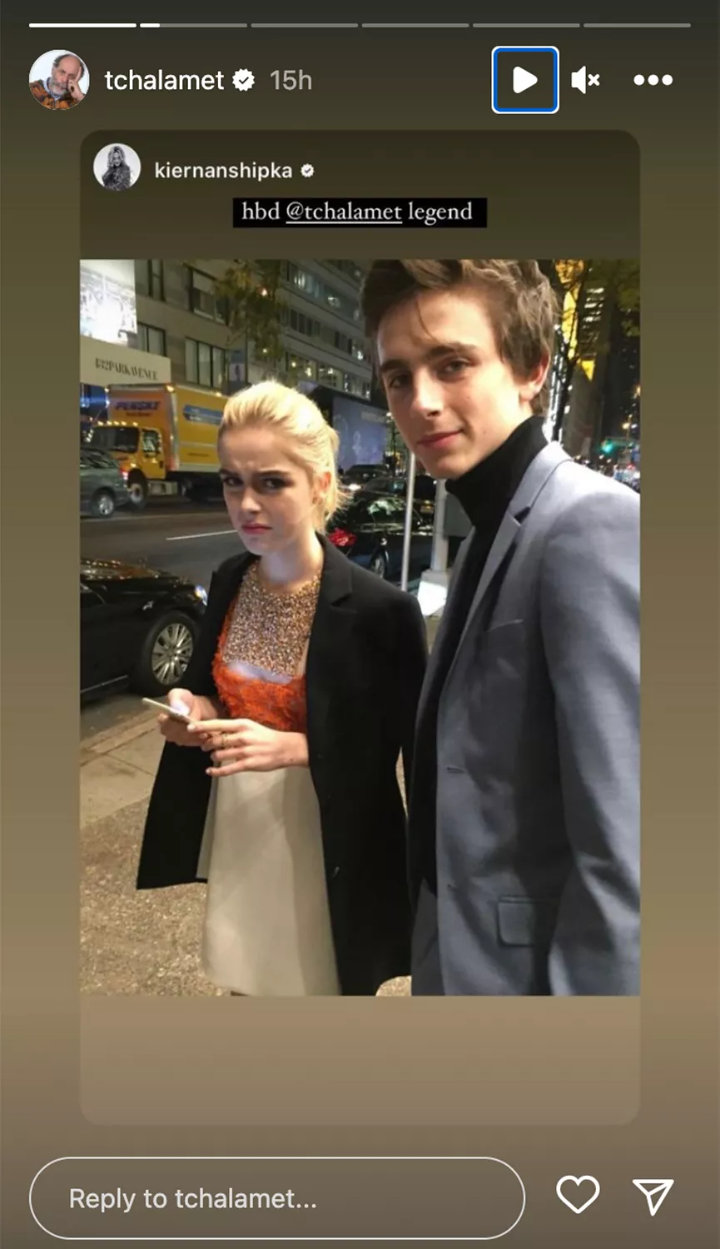 Timothee himself marked his birthday by sharing a throwback photo of him as a kid with a raised eyebrow and a silly hairdo. “He captioned the post simply with, “27” and an emoji.

Timothee told Variety last month that Zendaya has “really become a sister” to him. “I’m so grateful to count her as a partner and a sister and a friend,” he said, adding that it’s “amazing” for the two to share stories about working with Luca Guadagnino, who directed Timothee in “Bones and All” and “Call Me by Your Name” (2017), and Zendaya in upcoming tennis film “Challengers“.

Zendaya, meanwhile, was gushing about working with Timothee on “Dune” during an interview with PEOPLE. “I’m just so grateful that this experience has been with this guy because he’s massively talented but also such a good person. We’ve been able to have fun and become great friends,” she said.

He reciprocated the feelings as saying of his co-star, “She was like a breath of fresh air. She had a great energy.”

The two recently wrapped up the filming of the sequel, “Dune: Part Two“, which is slated to hit theaters on November 3, 2023.