Prince William and Prince Harry reunited for the unveiling of a statue in honor of their mother, Princess Diana. The brothers, who had been feuding, put aside their differences and came together for a common cause: to pay tribute to the woman who raised them. The California-based Harry flew across the pond for the event that took place in the Sunken Garden, reportedly one of Lady Di’s favorite places at Kensington Palace. The brothers were engaged in a lively conversation as they entered the garden. They greeted Diana’s brother and sisters enthusiastically and even dealt out a few kisses.

The Duke of Cambridge and the Duke of Sussex really made an effort to bond before they unveiled the bronze statue of their mother. “William and Harry spent the morning before the statue unveiling looking through old keepsakes, notes from Diana and bonding,” a source divulged to Us Weekly. “They have absolutely turned a new page in their relationship and have started the healing. Everyone around them was thrilled to see how close they were on the day of the statue unveiling.”

It seems as if the dukes cleared the air and seemed to get along, at least for the event. Can we expect them to continue to get along? Will the brothers reunite for family occasions? Keep scrolling to find out if they will make time for each other over the holidays.

Prince William and Prince Harry have made progress 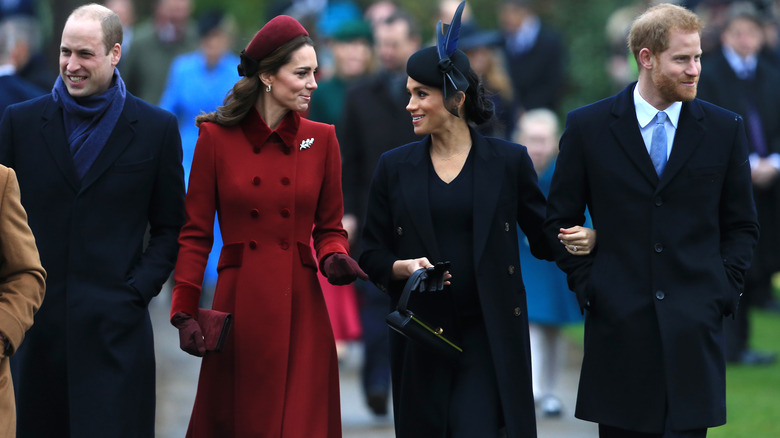 While Prince Harry and Prince William briefly reunited for the unveiling of Princess Diana’s statue, it doesn’t mean they will be spending all their free time together. According to royal watcher, Jonathan Sacerdoti, the brothers still have the Atlantic Ocean between them, making holidays and time together, rather difficult. He told Us Weekly, “It’s perhaps unlikely that they’re going to be spending what we would think of as quality family time together at Christmas and New Years and birthdays.”

Sacerdoti also pointed out that the Duke of Cambridge and Duke of Sussex now have an uncomfortable history, and it cannot be overlooked. “On a human family level, forgetting them being the royal family, there’s already quite some frostiness and distance there,” he explained. “So I suspect if things can go well, [then] maybe they’ll have the occasional meeting, but I don’t think it seems very high on anyone’s agenda.”

While the royal expert wasn’t too optimistic about the dukes spending holidays or special occasions together, it seems as if Prince Harry may return to his home country in the near future, per the Mirror. In September, after the U.K. COVID-19 restrictions have been lifted, there may be another celebration to honor Diana. Harry, and even Meghan Markle, may also jet in to celebrate the occasion. Perhaps, William and Kate Middleton will join the Duke and Duchess of Sussex to renew their family ties.