Chrissy Teigen has been in hot water in recent months following several allegations of online bullying. Plus, she’s taken the heat for various resurfaced old tweets to Courtney Stodden and then messages to Lindsay Lohan.

The model apologized for her previous actions in a lengthy Medium post on June 14, writing, “not a day, not a single moment has passed where I haven’t felt the crushing weight of regret for the things I’ve said in the past.”

“There is simply no excuse for my past horrible tweets. My targets didn’t deserve them. No one does,” she wrote, calling her words, “meanness masquerading as a kind of casual, edgy humor.”

“The truth is, I’m no longer the person who wrote those horrible things,” she continued, “Also, I know now how it feels to be on the receiving end of incredible vitriol. Believe me, the irony of this is not lost on me.”

However, shortly after her apology, designer Michael Costello took to Instagram, claiming he was cyberbullied by the cookbook author too. But Teigen’s team quickly called his allegations false and pointed out inaccuracies in his screenshot evidence. Keep scrolling for more details. 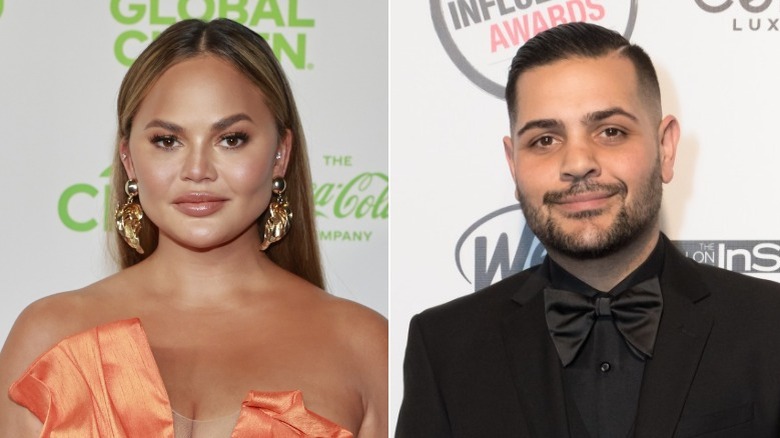 Following Chrissy Teigen’s apology, Michael Costello claimed he has “unhealed trauma” and thoughts of suicide after having a falling out with the model in 2014.

According to Costello, Teigen escalated a situation when a comment of him seemingly using a racial slur began to circulate. Although he claims it was photoshopped by a former disgruntled employee, Teigen publicly accused him of being racist.

Then, Costello allegedly sent Teigen a direct message, stating her comment was “adding more fuel to the fire,” however, according to the screenshots of the exchange, Teigen replied, writing, “Racist people like you deserve to die.”

But a representative from Teigen’s team claimed Costello’s evidence was “fake” to Business Insider. According to the outlet, “the screenshots showed several temporal inconsistencies,” per People, which suggests the images may have been doctored.

For example, the images show purple and blue messages, a design implemented in 2020, but the interaction allegedly took place in 2014. Plus, a video chat icon can be seen in the screenshots, a feature added in 2018. Additionally, Costello claimed the unflattering rumor about him, “has now been proven to be false by Instagram and since taken down,” but Instagram’s fact-checking policy wasn’t applied until later and the platform doesn’t remove false information, according to Business Insider.

Prior to the claims made by Teigen’s team, Costello said via Instagram he will no longer address “false allegations made by those close to my bullies in an attempt to smear my name.”

If you or anyone you know is having suicidal thoughts, please call the National Suicide Prevention Lifeline​ at​ 1-800-273-TALK (8255)​.