October has been a wild ride with news of Kylie Jenner’s split from Travis Scott and now things are getting even more confusing in this pop culture relationship saga. Here you have it: Jenner’s ex Tyga wore Travis Scott shoes in an Instagram pic and fans have a lot to say about it, because they think he’s trolling.

If you’re asking why this is a big deal, you might not be in the know, so I’ll give you the quick version. Jenner confirmed she and Travis Scott broke up on Oct. 3. Meanwhile, rumors were floating around that the makeup mogul reunited with Tyga for a late night hangout at a Hollywood recording studio.

Here’s what a source told E! News about the alleged studio meet up: "Kylie wanted to have a girls’ night out last night and Stassie thought it would be best to get her out of the house and her mind off the news. He was with a few of their mutual friends at Sunset Marquis and invited Kylie and her girlfriends to come hangout, since they were already out." Elite Daily preciously reached out to Jenner’s team regarding E!’s report, but did not hear back by the time of publication.

Jenner later took to Twitter on Oct. 3 to clear the air.

However, she was reportedly at the same club as Tyga on Oct. 5, adding fuel to the rumors that they were rekindling their friendship. Elite Daily previously reached out to both Jenner and Tyga’s reps for comment on the report that the former couple were at the same club, but did not hear back by the time of publication.

Now you can understand why fans are freaking out about a tiny Travis Scott-related detail in Tyga’s latest Instagram.

In the picture above posted to Tyga’s Instagram on Oct. 7, the "Taste" singer is full-on sporting Scott’s Jordan 1 High Top sneakers. While he didn’t write a caption on the photo, eagle-eyed fans were quick to pick up on the statement he was apparently trying to make.

"I see what you did here," another wrote.

"Wearing those sneakers w vengeance," a follower chimed in.

"This that ‘I’m getting back with kylie’ flex," another quipped.

And the comments just kept on going. 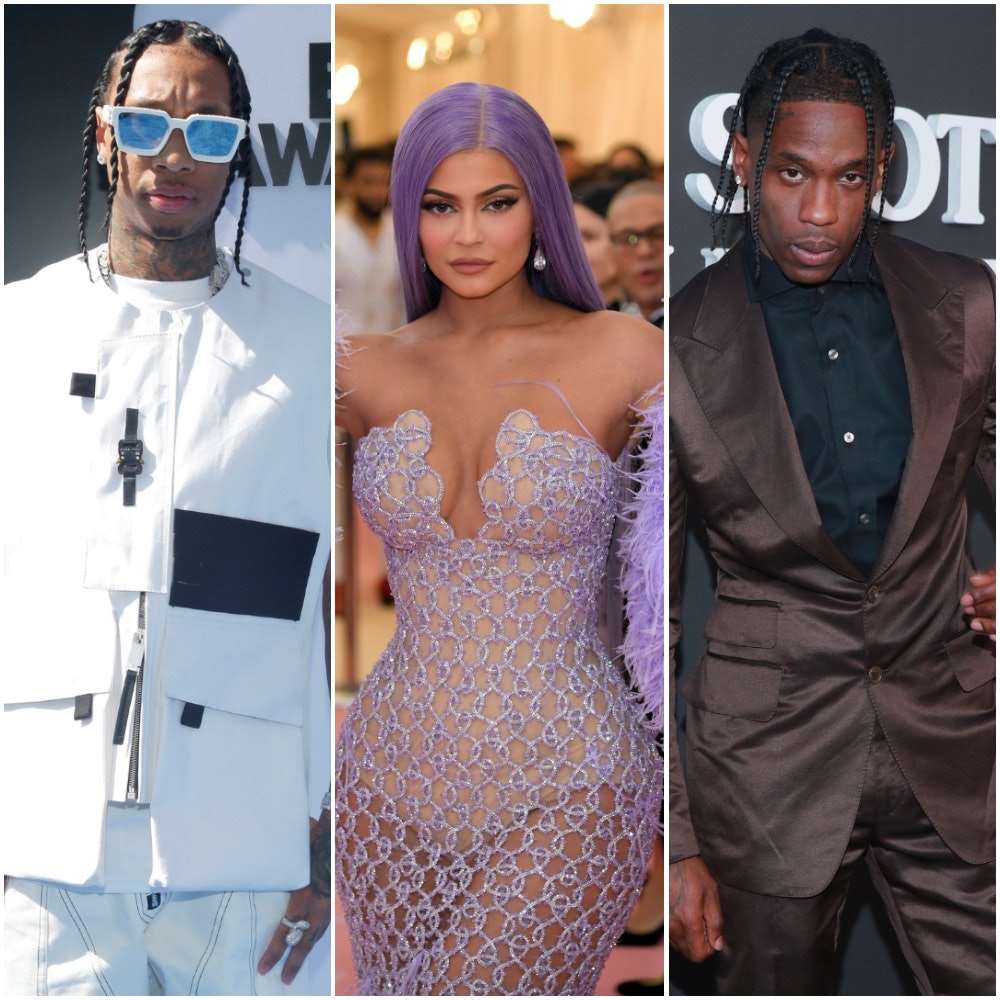 As you can see, Tyga’s IG post really hit fans in the feels. While it’s unclear if Jenner and Tyga are actually hanging out again and in what context, the reality star has already confirmed that she and Scott have no bad blood following their split.

"Travis and i are on great terms and our main focus right now is Stormi our friendship and our daughter is priority," she tweeted on Oct. 3.

Jenner appeared to be in good spirits in her many Instagram Stories she posted since she and Scott called it quits.

“Kylie is doing great. She had a very busy and fun week,” a source told People on Oct. 7. “She has also spent several nights with her friends. After separating from Travis, she really wants her friends around. She feels lucky to have amazing girlfriends that support her. She seems very happy and positive.” Elite Daily reached out to Jenner’s team previously for comment on People’s report, but did not hear back by the time of publication.

The self-made billionaire is also focused on her most important job: being a mom to Stormi.

nothing better than being someone’s mommy 🥰

“During the day, she is all about Stormi,” the source explained to People. “Kylie is young with endless energy. She has help, but she also loves being a mom. She is very involved with Stormi. She always seems the happiest when she is with her daughter.”

Whatever comes next for Jenner, judging by her recent tweets, I’m sure she’ll keep us fans in the loop!