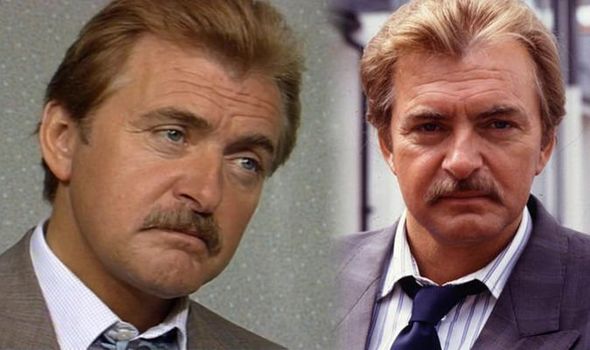 Tony Scannell, who played DS Ted Roach on The Bill for nine years, has died at the age of 74, a friend has confirmed today. The Irish actor found fame as DS Ted Roach, playing him for nine years in the 1980s and 1990s. He also starred in Flash Gordon, Evil Never Dies and Waking The Dead.

A friend wrote on Facebook: “Damn, damn, damn! I’ve just learned from Mark Wingett of the passing of a wonderful actor and dear colleague of his.

“Tony Scannell played a DS Ted Roach on The Bill for Nine years from 84-93. Any Episode that had him in it would have me fixated on the TV…

“I had a very bad case of a young girl crush on Ted/Tony. He was a bit of alright in my books. (despite the fact he was literally three months younger than my Dad!)

“When Tony retired Ted in 1993 I was gutted! I developed a unreasoning dislike of the new DS John Bolton (Russell Boulter) and ground my teeth every time the ‘holier than thou’ Inspect Andrew Monroe (Colin Tarrant) who caused Ted to quit, came on the screen.

“It took me more years than I care to admit (And meeting Russell, Mark and Hew Higginson) to rid myself of those daft feelings

“Ted was such a dynamic character, and although I never did get to meet him, I’m sure Tony was just as amazing… and his memory will be cherished by his loved ones and friends all.

“Vale Mr Scannell! And thank you!”

As yet it is unknown how Tony Scannell died.

This is a breaking news story. Express.co.uk will update when more information is available.

Tributes have poured in for the former The Bill star, who made his debut on October 23, 1984, in an episode called “A Friend in Need”.

Initially, he was signed for two only episodes but Scannell stayed until 1993 and even later returned for two episodes in 2000.

A Fan wrote on Twitter: “We have sad news, Tony Scannell who played D.S. Ted Roach has left us at the age of 74.

“We send our love and prayers to Mr Scannell’s family, friends and colleagues of Tony Scannell at this time. He will forever stay in the fondest memories of #thebill worldwide.”

Another wrote: “Today we must share some very sad news with you. We send our love and condolences to the family, friends and colleagues of Tony Scannell.

“Such a talented actor his portrayal of Ted Roach was legendary, he will forever stay in the fondest memories of #thebill fans worldwide.”

A third posted: “Rest in Peace, Tony Scannell, best known as one of Sun Hill’s finest, Detective Sergeant Ted Roach. One of the best characters in the history of The Bill. He’ll be missed.”

Katy Manning tweeted: “Another wonderful actor #TonyScannell best known for his superb portrayal of Ted Roach in #TheBill has gone on his awfully big adventure.

“He was a gentle soul who i was lucky to work with on a film a few years ago. My heart goes out to his much loved family.”