Today’s Hoda Kotb and Kristen Dahlgren share more in common than their journalism careers – they also share a deep affection for silk shirts!

In an unexpected twinning moment, Hoda and Kristen were both spotted wearing the exact same blue silk shirt as they appeared on Friday’s Today programme.

In a bid to capture the hilarious moment, Hoda shared a sweet snap on her Instagram account along with the caption: “Twinning with @kristendahlgrennbc can you say @zara”.

MORE: See the Today cast as Real Housewives – and you won’t believe their taglines

Aside from their fabulous shirts, Hoda and Kristen similarly donned matching black suit trousers and accessorised with dainty necklaces. The two ladies could be seen smiling from ear to ear as they posed for the hilarious photo.

The duo had a twinning moment

Amused by the unlikely situation, Hoda raised her eyebrows and held her arm outstretched in a display of surprise.

Fans flocked to the comment section to heap praise on the duo, with one writing: “Looks great on both of you!” whilst a second penned: “Kristen and Hoda, you both look gorgeous!”

“This completely cracked me up this morning,” wrote a third, and a fourth added: “Love the twinning,” followed by a pair of blue heart emojis. 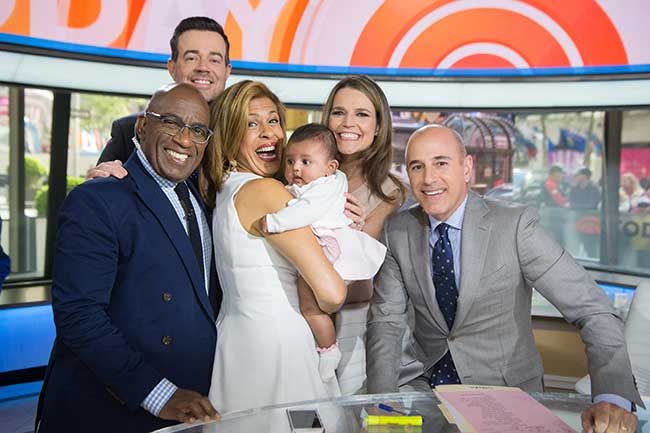 Hoda’s sweet twinning moment comes after she shared a powerful message about mental health. Taking to her Instagram account, the news anchor shared a quote from Steven Bartlett, which read: “If you want to feed a problem, keep thinking about it.

“If you want to starve a problem, take action. Most of the harm starts in your mind, with you and your thoughts. Most of the solutions start with a decision, courage and action.”

The journalist shares a close bond with co-host Savannah Guthrie

Alongside the quote, Hoda wrote: “I like this. ‘Thinking’ doesn’t always solve problems, action does. Happy Thursday!”

Fans were quick to comment on the post, with one writing: “This is so true, it’s half the battle Hoda,” while another wrote: “I needed to hear this.” A third added: “I really needed this today.”