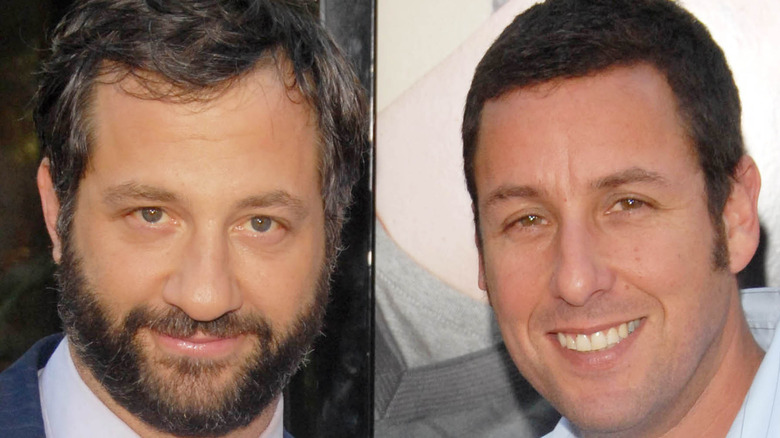 Today, both comedian Adam Sandler and writer/director Judd Apatow are household names. Sandler rose to fame thanks to his stint as a cast member on “Saturday Night Live” in the ’90s, during which time he gave life to famous characters like Opera Man, Hank Gelfand, and Canteen Boy (via CNBC, Ranker). Sandler would then continue his hot streak with films like “Billy Madison,” “Water Boy,” and more.

For Apatow, mainstream success would come a little bit later: Although he was a working writer with jobs on “The Larry Sanders Show” and “Freaks and Geeks,” he wasn’t known by the public at large until the debut of his 2005 film “The 40-Year-Old Virgin” (via NPR, Entertainment Weekly, Insider). After that, he had a string of successes with films like “Knocked Up,” “Pineapple Express,” and “This Is 40.”

However, it wasn’t always this way for Apatow and Sandler, who are old friends and were even roommates in the early ’90s when the two were up-and-coming comedians in Los Angeles. In fact, the pair would later fictionalize some of their experiences when they collaborated on the film “Funny People,” which was written and directed by Apatow and starred Sandler. The film even features a video Apatow shot of Sandler making a silly prank call when the two lived together (via CBS). “I was directing Adam badly even then,” Apatow said of their earliest collaborations.

So what was it like when Judd Apatow and Adam Sandler lived together? Given that they were two male comics in their 20s, it was probably exactly what you’d expect. While promoting “Funny People,” Apatow said boarding with Sandler was like sharing a home with “the comfortable naked guy at the gym” (via PopSugar).

Their professions at the time certainly lent themselves to an unconventional lifestyle. “Back then, life was just doing stand-up or writing jokes. You would sleep until noon everyday and kind of stumble out,” Apatow recalled. “You would have to be at work at 8:30 at night. Work was sometimes 15 minutes” (via Hollywood Reporter).

Sandler slept on a bed with no sheets and had a car that was more trash than car — yet he seems to have a slightly sunnier disposition about the time than Apatow. “It wasn’t broke. We were doing as comedians good enough to get by …We could eat at Red Lobster once every month. That was a big night out,” Sandler recalled in The Hollywood Reporter. Apatow agreed — “That was like, ‘We’re fancy now,'” he said.

Eventually, the two went their separate ways — mostly because Sandler got hired to write for “SNL.” “He just left, like he was going to come back, but he just didn’t come back,” Apatow explained. In fact, Sandler was so convinced he’d get fired from the gig that he kept paying rent after he moved out — and what is that if not a true friend?