The Prince and Princess of Wales were joined by the Duke and Duchess of Sussex, as the royal brothers and their wives viewed floral tributes to the Queen at Windsor Castle on Saturday.

The reunion came as a surprise to the crowds who waited outside the royal residence and that wasn’t all – the foursome also arrived and left in the same car after talking with members of the public for around 40 minutes.

Typically, the royals arrive at public events in separate vehicles but given that Harry and Meghan’s UK residence, Frogmore Cottage, is now a stone’s throw from William and Kate’s new Windsor abode, Adelaide Cottage, it made sense for the couples to travel together.

A palace source said that the Prince and Princess of Wales invited the Sussexes to join them.

WATCH: Prince and Princess of Wales and the Sussexes unite at Windsor for emotional walkabout

Dressed in black, the royals looked sombre as they stopped to shake the hands of teary fans who were standing behind a barrier.

Both of the royal ladies opted for smart black dresses, while Princes William and Harry donned black suits.

The couples looked emotional as they arrived

William was seen speaking intently to a member of the crowd, at one moment shaking a woman’s hand. Both William and Kate could be seen thanking people.

Kate crouched down at one moment and began speaking to a child who had started to cry. The child stopped crying when Kate approached her. 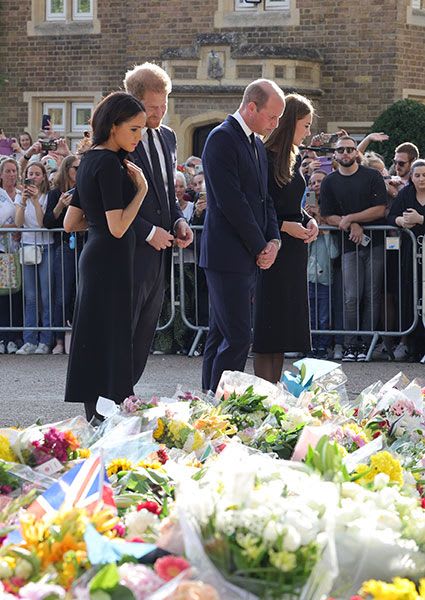 The foursome viewed floral tributes to the Queen at Windsor

Meghan was also seen shaking the hands of several children and well-wishers at Windsor. The Duke and Duchess were handed bunches of flowers by the crowd which they both accepted.

William and Kate were also given bunches of flowers by members of the crowd as one visitor waved a Welsh flag in the background. At one moment, a small Paddington Bear was given to William, which he passed on to an aide.

He was seen lightly touching Kate’s back at one moment as she crouched down again to speak to a child at the front of the gates.

On Saturday, Buckingham Palace confirmed that the Queen’s funeral will take place on 19 September at 11am with the service taking place at Westminster Abbey.