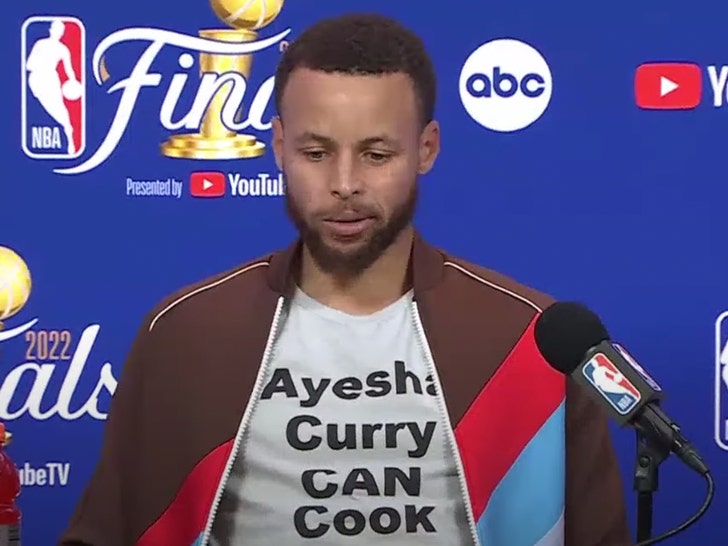 Steph Curry beat the Celtics on the court on Monday night — and then he got the victory against their fans off of it immediately afterward, rockin’ a T-shirt that trolled the hell out of some heckling Boston supporters.

Just minutes after Curry and the Warriors beat the Cs at the Chase Center in Game 5 of the NBA Finals in San Francisco, the Golden State superstar showed up to his news conference with a tee that read, “Ayesha Curry CAN Cook.”

It was a simple, grey-and-black article of clothing underneath a zip-up jacket … but it was the perfect clap back to some trolling that Celtics fans did before Friday’s Game 4 in Boston.

If you missed it, outside of a popular bar, fans wrote “Ayesha Curry Can’t Cook” on a sign to troll Curry’s wife, who’s a chef.

The 34-year-old, though, let the shirt do his talking for him, because when a reporter asked him about it — he said simply, “You’ve got to ask around the room and ask Twitter. Yeah, yeah. Absolutely.”

Game 6 is slated for Thursday night back in Boston — and while it looks like Curry’s got one-up on the haters right now, we’re sure there won’t be a quiet response in Beantown then.