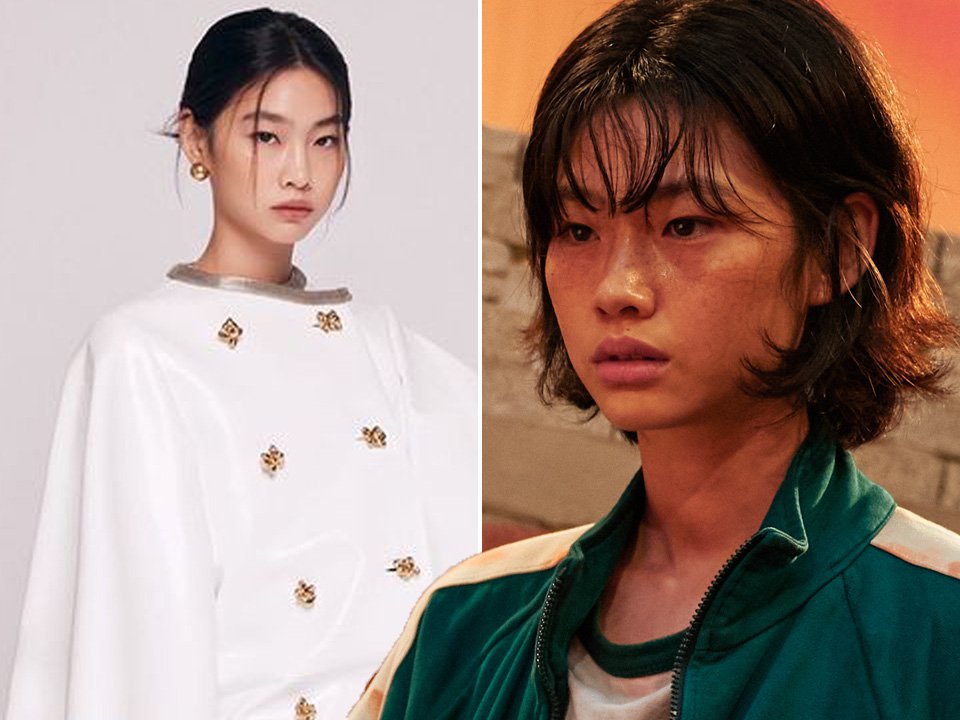 The 27-year-old actress, who made her name in the fashion world before being cast as Kang Sae-byeok in the hit South Korean Netflix series, has gone back to her roots and fans of the violent drama will be stunned by the transformation.

The move sees the model back at the brand who kick-started her career with her runway debut, and she is delighted to be back years later.

Wearing her hair up for the first official campaign snap, Jung stunned in an oversized white jacket with gold detailing.

It’s a much more glamorous turn for the star, with Squid Game fans used to seeing her in uniform as contestant 067, who is a North Korean defector entering Game in search of a broker to help find and retrieve her family members left over the border.

Her Louis Vuitton role was revealed last week, and she said in a statement: ‘It is an honour to mark my beginnings as an actress with Louis Vuitton after having worked with them as a model.

‘I’m looking forward to every moment I will experience with Louis Vuitton as their global ambassador.’

And Creative Director Nicolas Ghesquière added: ‘I immediately fell in love with HoYeon’s great talent and fantastic personality, and I am looking forward to starting this new chapter of the journey we started at Louis Vuitton a few years ago.’

Jung’s history with the brand goes back to 2017 when she made her Paris Fashion Week debut on the runway in a corset leather dress.

She has since walked for the likes of Chanel Haute Couture, Burberry, Bottega Venetta, Fendi and plenty of others.

And the former Korea’s Next Top Model contestant, who was runner-up on the reality show back in 2013, has previously admitted she’d love to balance both her passions if her schedule allows it.

She told Teen Vogue: ‘I hope I can do both but, physically, I think if I got a role or a new series came in, then I’d have to focus on the shooting.

‘At that moment, I don’t think I can do modelling at the same time as acting, but, if I don’t have a time [where I need to be shooting], then I could do modelling. I could manage. I’m a very flexible person!’

And with her acting career still in its early days – amazingly, Squid Game is her first TV role – she is ready to take everything as it comes.

Speaking to Herald POP, she said: ‘I don’t have any goals as an actress. I want to improve every day and maintain a steady pace without ever losing my resolve to work hard.

‘I may waver a lot, but I’ll work really hard and keep going.’