Eamonn Holmes gets kissed by his dog in cute moment

Ruth Langsford was having none of it after her husband Eamonn Holmes shared a sweet Instagram video. The This Morning host exposed the “naughty things” he does it at home, after he spoke out about love.

The 60-year-old reshared the clip and caption, seemingly explaining the real story.

Broadcaster Eamonn, 61, had initially uploaded a short film in view of his 709,000 followers two days ago.

The father-of-four was seen in the car, with the couple’s pet dog Maggie.

The pooch is a regular feature in the pair’s social media updates, after they rehomed the black crossbreed from Dogs Trust in 2011. 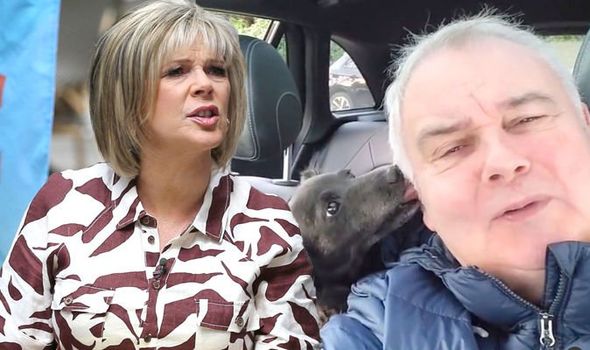 We will use your email address only for sending you newsletters. Please see our Privacy Notice for details of your data protection rights. Charlie Lawson: Corrie legend rages at ‘little s**t’ for milk theft

Eamonn was heard calling the adorable canine as he sat in the frontseat, while she was in the back.

She soon responded and started licking the side of his face.

The presenter then went into a rendition of All You Need Is Love by The Beatles.

However, spotting what her spouse had posted, Ruth claimed Maggie was only reacting that way as he gave her treats.

The mother-of-one said she was the disciplinarian at home when it came to the hound.

She wrote in view of her own 983,000 fans: “Only because he feeds her the naughty things I don’t let her have!”

Many commented on their exchange, with one user responding: “Both of you are so cute xx.”

A second said: “My husband’s the same with our dog. She goes to him more cos he gives her all the treats. You gotta love Eamonn tho!”(sic)

“Doesn’t Ruth do the same?” a third questioned.

The couple, who wed back in 2010, have spokenly openly in the past about the joy Maggie has brought them.

He stated: “After meeting Maggie we knew we had to take her home with us and we’ve never looked back.

“I couldn’t imagine our home without her.”

Eamonn once claimed on This Morning that he wants to stuff the dog after she dies, so she “live on”. Ruth immediately objected.