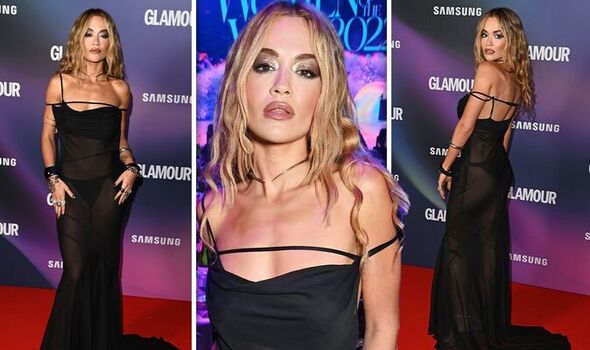 Rita Ora was sure to leave little to the imagination as she took to the red carpet this evening in a black sheer number for the Glamour Women Of The Year Awards 2022.

Rita Ora, 31, stunned in a black sheer strappy number this evening for the Glamour Women Of The Year Awards 2022 held at the Outernet in London.

The Hot Right Now singer showed off her gym-honed figure in the sheer black strappy number, which revealed her skimpy underwear.

The singer commanded attention in the barely-there gown, which hugged her hourglass physique, while pairing her ensemble with stilettos.

Rita accessorised with layered bangles and went for a bronzed make-up palette, and loose waves for the night.

Also making an appearance was Ashley Roberts who stole the show in a barely-there silver dress, exposing her ample assets.

Rita Ora commanded attention in the sheer black strappy number, with the gown skimming over her phenomenal gym-honed figure. The dress fell partially off the shoulder, with the gown element leaving a small trail.

Rita Ora left very little to the imagination as she sported the sheer dress, exposing her skimpy black underwear and peachy derriere.

Rita Ora went for a bronzed make-up palette, paired with a sparkly pink eyeshadow, adding colour to her all-black ensemble.

Rita Ora commanded attention in her barely-there gown and made sure the rest of her outfit did not disappoint. The pop singer wore her dark blonde tresses in loose waves over her shoulders.

Rita Ora posed with her mother and sister at the event

Rita Ora made sure to pose at all angles as she showed off her show stopping outfit. The singer brought along to the event her mother Vera Sahatçiu and her sister Elena Ora.