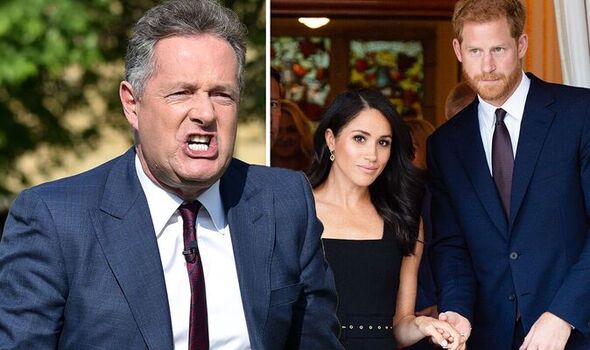 TalkTV star Piers Morgan was left fuming today after seeing that he had been included in the trailer for Prince Harry and Meghan Markle’s new documentary. The Netflix two-parter, entitled Harry & Meghan has been described as “ghastly” by the former Good Morning Britain host.

In view of his 8.2 million Twitter followers, Piers shared the trailer posted by Netflix.

He captioned the clip: “BREAKING: Princess Pinocchio & Prince Hypocrite use my voice to flog their ghastly new series.

“I’m traumatised by this exploitation,” the journalist added sarcastically.

He followed this tweet soon afterwards with another dig at the Hollywood couple.

This afternoon, Chris wrote: “If anyone was in any doubt that Harry and Meghan plan to blame his family and the press for their exit from the UK and the Royal Family, not anymore.

“Prince Harry in the second @netflix trailer: ‘There is leaking, but there is also the planting of stories.’”

“Harry talked about the ‘pain and suffering of women marrying into this institution’,” he continued.

“In this clip from the @netflix docu-series, the Duke of Sussex refers to it ‘as a dirty game’.”

Sharing the dates for the new show, Chris penned: “Confirmation from @netflix that Harry and Meghan series will drop episodes 1-3 on Thursday 8 December (exactly 3 month after day the Queen died) and episodes 4-6 on December 15.

“(Although you do have to qualify that claim with ‘according to their side of the story’),” Chris added.

“Deep breaths everyone, the first 3 programmes will hit us on Thursday…” he signed off with a worried emoji.