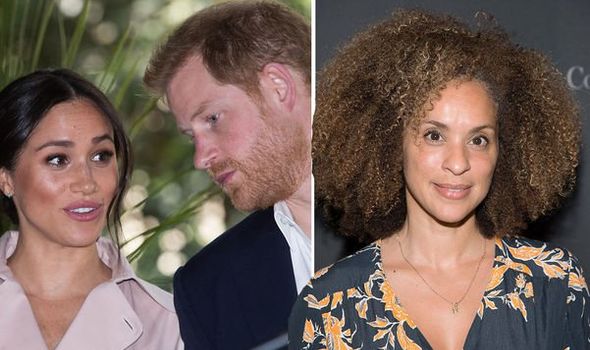 Prince Harry, 36, and Meghan Markle, 40, said they wanted to live a quieter life in Santa Barbara, California, after quitting their royal lives in the UK. They have since been working on respective projects in their new home town, where they are bringing up two-year-old son Archie and baby daughter Lilibet.

The Fresh Prince of Bel-Air actress Karyn Parsons, 54, was raised in Los Angeles but has since moved away from the “suffocating” city to New York.

Speaking to Express.co.uk to promote her new movie Sweet Air, the actress shared her thoughts on the couple living in LA.

She said: “I think LA is good for a lot of people.

“It depends on what you’re doing and what you can surround yourself with.

“It’s an industry town, a lot of towns are industry towns, it’s Hollywood. It’s a little, for me, suffocating.”

Elaborating on her point, the film star said while parts of the city are different, it is very showbiz-based.

“At restaurants, when someone walks in, people’s heads turn quickly to see who just came in the door,” she continued.

But, Karyn said “it might be different” for the couple, who are based in Santa Barbara.

The Suits actress grew up in Los Angeles, living with single mum Doria.

Meghan married into the royal family back in 2018 after meeting Harry through a mutual friend.

After stepping down from their duties, the pair did a bombshell interview with Oprah Winfrey, which hit the headlines across the globe.

During the chat, Meghan said she felt suicidal during her time in the Palace, claiming she was refused help.

She also recalled Prince Harry telling her that an unnamed member of the family had “concerns” about the colour of their son Archie’s skin.

She spilled: “It’s so weird that people are so fascinated with the Royal Family over here because it’s not our Royal Family, it’s not the same.

“But there are a lot of people here who are really really fascinated.”

The mother-of-two added that Americans were still fans of Meghan, amid the former actress coming under scrutiny in the UK.

“We are all in Meghan’s camp,” she added.

“I think she definitely does [have support], we don’t obviously have the same history with the Royals here.”

The drama is an intimate and aching family show, described by Quentin Tarantino as one of the most powerful new films he’s seen in years.

It is available to watch digitally and in cinemas nationwide.