Around 200 mourners gathered on Bondi Beach this morning to farewell Annalise Braakensiek in an emotional sunrise ceremony. 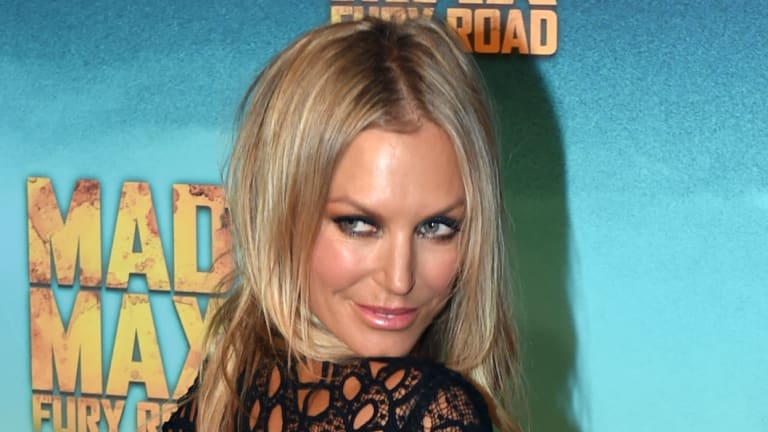 Annalise Braakensiek at the premiere of Mad Max: Fury Road in May 2015. The model was found dead on Sunday, January 6.Credit:AAP

The model and socialite, 46, was found dead at her Potts Point apartment on the afternoon of Sunday, January 9, by emergency services after her family and friends became concerned after not hearing from her for a number of days. She had often been open about her struggles with depression and was an ambassador for suicide prevention charity R U OK.

Braakensiek's mother mother Veera, sister Deva, ex-husband Danny Goldberg, and friends Jodhi Meares and Gina Byrnes were among the family and friends who attended the 6am ceremony on her beloved beach, where she was "discovered" by a modelling photographer when she was just 15.

Wearing frangipanis, Braakensiek's favourite flower, mourners began proceedings with a silent meditation, before singing a song and reciting a prayer: "May the long time sun, Shine upon you, All love surround you, And the pure light, With you, Guide your way on, Guide your way on."

After watching the sun rise together, the frangipanis were placed in the water, while some attendees paddled out to the ocean on surfboards to lay a frangipani wreath within an honorary circle.

Afterwards, mourners gathered at the nearby Bucket List for a cup of hot lemon water, Braakensiek's "morning ritual".

In a social media tribute to her friend following Braakensiek's death, Byrnes wrote: "Baby, I know you felt so abandoned and misunderstood by some people but you were loved globally sweetheart."

In December, Braakensiek posted about her life's ups and downs as well as some "new beginnings" on Instagram.

"Life's challenges have been deep, dark, difficult, demanding and downright scary lately. For me and so many others I know. But today is a new day!" she wrote.

On RUOK Day in November, she wrote that it was important to break the silence around mental health, because "it happens to the best of us".

"Mental health has so so many misconceptions, criticism, misunderstandings and false judgments still," she said.

"Thank you from the bottom of my heart to all of you who have helped me through my dark clouds."

For help or information, call Lifeline on 131 114 or visit beyondblue.org.au.