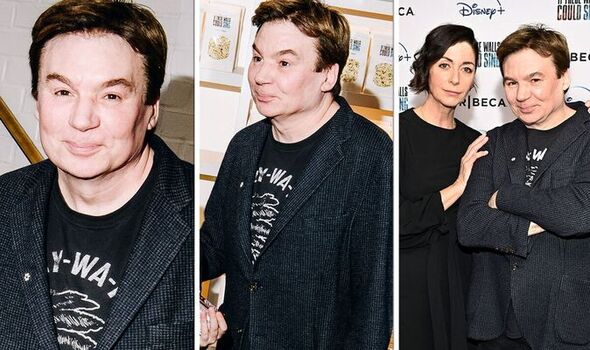 The comedian supported Mary McCartney at the New York premiere of If These Walls Could Sing.

The comedian supported Mary McCartney at the New York premiere of If These Walls Could Sing.

Mary, who directed the new Disney+ series, is the daughter of music icon Paul McCartney.

The series showcases the untold stories of the famed Abbey Road studio where celebrated bands like the Beatles recorded their music.

His son Spike appeared in Adidas joggers and a hoodie featuring the symbol for the famed anime Attack on Titan.

The Wayne’s World star appeared in all-black outfit, showing off his cheery smile alongside Mary McCartney.

Spike also got a chance to meet Mary at the premiere.

The father-son duo made an adorable appearance

Their night out saw Spike heading home with some goodies in hand.

Spike is the eldest of Mike Myers’ three children

Mike also has daughters Sunday and Pauline with his wife Kelly Tisdale.

The star-studded event saw many music icons in attendance