Good morning, Megan Fox just shared a bunch of photos of herself in a sparkling blue jumpsuit, and casually informed everyone that she and Machine Gun Kelly cut a hole in the crotch to have sex in it.

In addition to several pics of her and MGK featuring the jumpsuit, Megan dropped screenshots of texts she sent her stylist Maeve Reilly, saying “Was this blue outfit expensive because we just cut a hole in the crotch so we could have sex.”

Swipe on ^ but also here ya go: 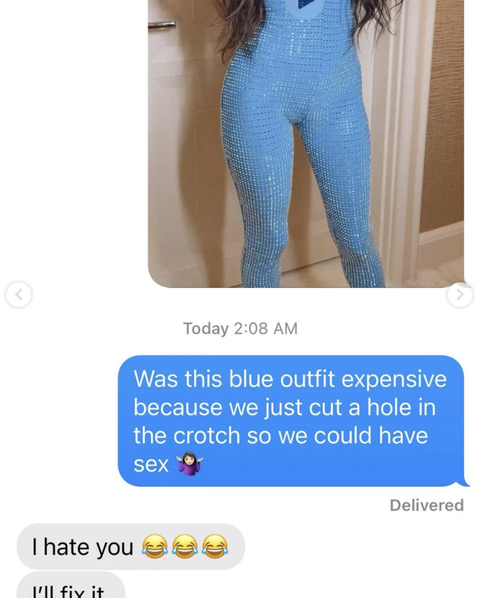 Megan and MGK were in Las Vegas for the Billboard Music Awards, where MGK dedicated the song “twin flame” to Megan, calling her his “wife.” Though it doesn’t appear as though the couple are actually married yet, because he spoke about his wedding to E! News on the red carpet, saying “I don’t want to say too much. It’s going to be weird. It’s going to be completely out of the box.” He went on to specifically call Megan his “fiancée,” saying “Well, it’s my fiancée’s birthday at midnight. So, we’re celebrating her wonderful life being here on planet earth.”

Got it! And FYI a source previously told E! News that the couple isn’t “in a huge rush to tie the knot but have been starting to engage in the planning process” and that while they “don’t have a firm timeline,” they would “love to get married next year if they can nail down all of the details by then.”