The coronavirus pandemic caused a worldwide shift as people everywhere found themselves in quarantine. Many cities were under lockdown, and people had to resort to extreme measures to handle everyday things, like getting their hair cut. As it turns out, celebrities faced the same situations.

Leslie Mann and her husband Judd Apatow recently revealed a hair dye job gone wrong. It left the This Is 40 actor with an embarrassing hair faux pas.

Lockdown gave people a lot of time to bond whether they wanted to or not. Essential workers, including people in the food industry and medical professionals, could leave their homes. Few others had the chance.

Hairstylists may be necessary, but they don’t fall under the group of essential workers. As such, their lack of services saw many people resorting to drastic measures to maintain their tresses. Unfortunately, many people soon realized the dangers of trying to manage their hair at home. It looks like Mann might have as well.

The actor and her director-husband recently sat down with Wired to answer the Web’s Most Searched Questions. One of the questions was about Mann’s natural hair color. Mann said, “It could be anything at this point.” Apatow revealed that Mann required him to help her dye her hair.

The statement seemed to open a jar of memories for Mann, who reminded her husband of when they tried (and failed) at dying her hair while on lockdown. She said, “During lockdown, Judd dyed my hair. I asked you to like put it on the back part that I couldn’t see. And he like put way too much, and so this whole area (pointing to the back of her head) was like bright orange. It was terrible.”

Mann revealed that she had to keep the color until her hair grew out.

Mann and Apatow have collaborated on several projects together

Mann and Apatow make for a good team in Hollywood. Married since 1997, the pair has collaborated on various projects together, including the 2005 comedy The 40-Year-Old Virgin starring Steve Carell.

They followed it up with the Katherine Heigl/Seth Rogen-led movie Knocked Up. Then, Mann and Apatow explored their joint creativity in the 2009 satirical comedy Funny People alongside Apatow’s longtime friend Adam Sandler.

Mann and Apatow also worked together on the Knocked-Up sequel This Is 40, which focused on Mann’s character as she and her husband (played by Paul Rudd) navigated marriage and the fear of turning 40. They also recently worked together on The Bubble.

Leslie Mann and Judd Apatow have two daughters together 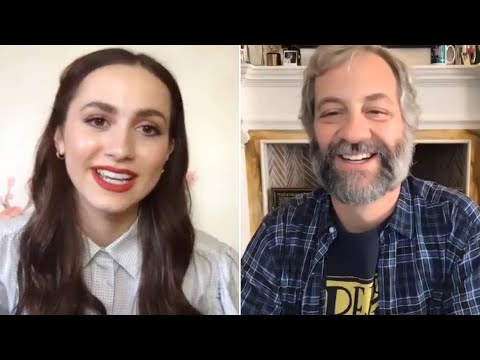 Mann and Apatow also discussed their children in the Wired interview. The pair have been married for two and a half decades and share two children, Maude Apatow and Iris Apatow.

The children are an integral part of the pair’s creativity. Both girls have appeared in their parents’ projects, including This Is 40 and The Bubble. However, they’ve found their footing in Hollywood and branched out on their own.

Maude is famous for her role on the HBO show Euphoria, where the 24-year-old plays Lexi Howard, Zendaya’s character’s best friend and Sydney Sweeney’s character’s sister. Writer and director Sam Levinson revealed that he wrote the role specifically for her.

At 19 years old, Iris appeared in The Bubble as a famous TikToker-turned-actor Krystal Kris.