Prior to this, the rapper-turned-professional boxer won two fights, one against Swarmz and another opposed to Luis Alcarez Pineda, on the same night in London.

AceShowbiz –KSI wants to fight Tommy Fury. The rapper-turned-boxer has confirmed that he’d love to face Tommy, the brother of heavyweight champion Tyson Fury, in the ring in his next fight.

KSI, who beat both Swarmz and Mexico’s Luis Alcarez Pineda on the same night in London, told talkSPORT, “I’m definitely down to fight Tommy Fury, 100 percent. I don’t want to say too much, but for me that could make sense for my next fight after the 27th. There’s obviously other names, but Tommy Fury is one of the names.”

Tommy, 23, starred on the U.K. version of “Love Island” in 2019, after making his professional boxing debut the year before. And Tommy has confirmed that he’d be keen to face KSI. Speaking after KSI’s latest win, Tommy tweeted, “What have I just seen?” And after KSI called him out, Tommy added, “You know where to find me @KSI (sic)” 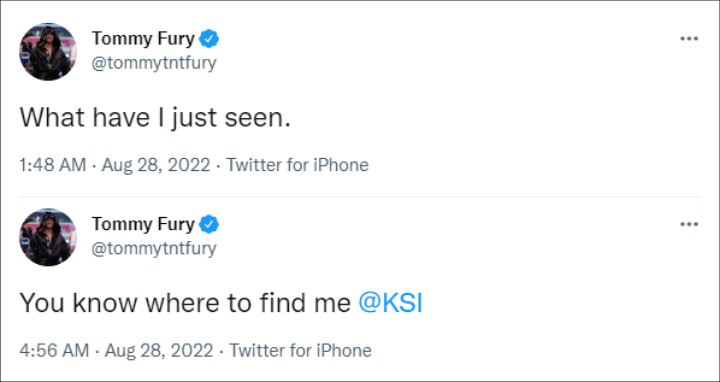 Meanwhile, KSI admitted to feeling like a “god” prior to fighting at The O2 Arena in London on Saturday, August 27. The rap star also described himself as a “complete alpha”. KSI – whose real name is Olajide ‘JJ’ Olatunji – said, “Honestly, I feel like a God. I feel like a complete alpha amongst other men. Not to be douchy, but I just feel like no one can outrun me and no one can out punch me.”

“I feel very different to everyone else. I think that’s just because I’m super fit and super ready. I feel good as well. I look at myself in the mirror, and I just stare at myself for five minutes, just being like ‘Jesus Christ. I’m sick.’ But I’ve worked hard for it. I’ve worked really hard for it, man.”