Kelly Carlin added a bit of irreverence to the Creative Arts Ceremony tonight as she accepted the Emmy for Outstanding Documentary or Nonfiction Special for the HBO film about her dad, George Carlin’s American Dream. As an executive producer of the film, she shared the award with director-executive producers Judd Apatow and Michael Bonfiglio, E.P. Teddy Leifer, Co-E.P. Joseph Beshenkovsky, supervising producer Amanda Glaze, and producer Wayne Federman.

At the mike, Kelly Carlin said, “I want to thank my parents Brenda and George. A couple of things my dad would want to say to you tonight — one of which is remember to take care of each other, and go fuck yourself.”

She began her speech in a somewhat more straightforward vein, noting, “Taking care of a legacy is one of the weirdest things ever but this group of people has helped us do that in such an incredible way. I want to thank HBO for bringing my father back home from where it all started, everyone from the Academy who believed in my father and his heart and his dreams, and this amazing production team filled with geniuses. I am so honored to be a part of this.” (HBO aired numerous Carlin comedy specials, hence Kelly’s reference to “bringing my father back home.”). 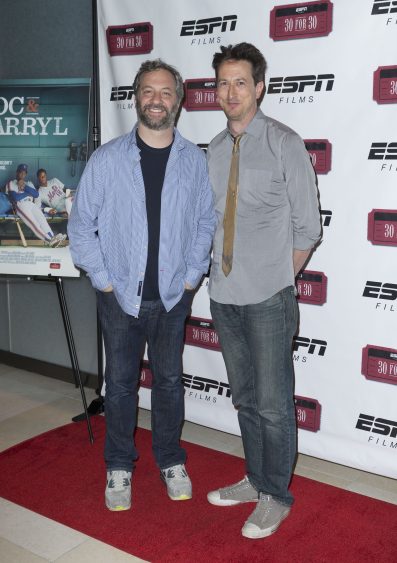 The younger Carlin shared her father’s voluminous archives with Apatow and Bonfiglio, allowing the directors to craft a two-part film that covers the whole of the comedian’s life and career: his upbringing in Manhattan, brief career in the U.S. military, start as a disc jockey and then early comedy career as a duo with Jack Burns. Carlin, of course, would eventually become a solo act and one of the most incisive commentators on American culture to ever take a stage or write a joke.

Back in July, Apatow told Deadline, “When you start a project like this, you really want to do right by the subject. We were all very intent on making something that was worthy of George. So it just makes me happy and gratified that so many people are learning about him and connecting with his work as a result of the documentary.”

The film doesn’t conceal George Carlin’s drug problems or the stresses on his marriage to Kelly’s mother, Brenda. Apatow praised Kelly for her desire to tell an uncensored story.

“She was very open about his life and his history and his problems,” Apatow told Deadline in July. “The obstacles you can face when making a movie like this is if someone is seeking to protect the subject. And it’s really only possible to make a documentary like this if the family has a philosophy of telling the complete truth about the person we’re making the film about. And from the very beginning, Kelly said, “We want to do something that is new and innovative and not cliche. My dad would only be mad if this was bullshit.’”

George Carlin, who died at the age of 71 in 2008, was nominated for six Emmys during his storied career in comedy, but never won. Tonight, in a sense, that oversight has been corrected.

‘The Lord Of The Rings: The Rings Of Power’ Aftershow ‘Inside The Ring’: Episodes 1 & 2