Kate Middleton wants to shine a light on those in need.

On Tuesday, the Duchess of Cambridge launched a new campaign titled “Taking Action on Addiction” from her patronage The Forward Trust.

The British royal delivered a keynote speech, which stressed the importance of addressing the misconceptions surrounding addiction and its roots in early childhood experiences. The campaign coincides with Addiction Awareness Week.

During her speech, the wife of Prince William thanked those who shared their personal experiences with her as she met with beneficiaries of the charity, along with supporters who have faced addiction. 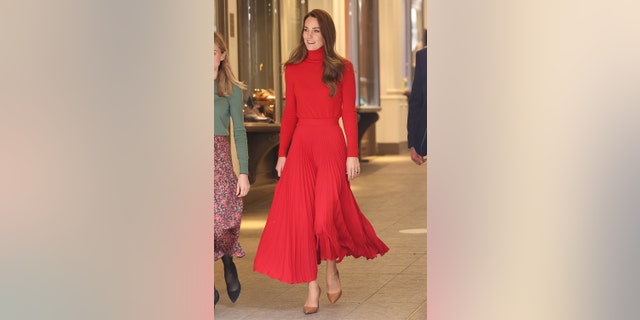 Catherine, Duchess of Cambridge leaves BAFTA after making a keynote speech on October 19, 2021 in London, England. Led by the Forward Trust, ‘Taking Action on Addiction’ is a long-term campaign which will work to improve awareness and understanding of addiction, its causes and scale in society to enable more people to ask for and receive help.
(Photo by Neil Mockford/GC Images/Getty Images)

“Addiction is not a choice,” said the 39-year-old, as quoted by People magazine. “No one chooses to become an addict. But it can happen to any one of us. None of us are immune. It is all too rarely discussed as a serious mental health condition and seldom do we take the time to uncover and fully understand its fundamental root causes.”

“The journey towards addiction is often multi-layered and complex,” the duchess continued. “But, by recognizing what lies beneath addiction, we can help remove the taboo and shame that sadly surrounds it. As a society, we need to start from a position of compassion and empathy.”

According to the outlet, Middleton pointed out how lockdowns and anxiety caused by the coronavirus pandemic have greatly impacted many sufferers.

“The pandemic has had a devastating impact on addiction rates,” said Middleton. “And families and children are having to cope with addiction in greater numbers than ever before. We know that over one and a half million people across the U.K. who did not have substance misuse prior to lockdown may now be experiencing problems associated with increased alcohol consumption. Around two million individuals who were identified as being in recovery may have experienced a relapse over the past 19 months.”

During a lighter moment, the mother of three bumped into Ant McPartlin and Declan Donnelly, hosts of “I’m a Celebrity… Get Me Out Of Here.” The duchess joked that she thought she was “in trouble” and that they were going to make her do one of their “tucker trials.”

“We can arrange that,” the royal was told.

The outlet noted that McPartlin shared his battles with the duchess during a heartfelt conversation.

“It was bad,” he admitted to her. “But as soon as you open up the problem starts to disappear and it gets better.”

During her speech, Middleton said that the personal stories shared with her have made a lasting impact.

“I have had the privilege of meeting many incredible people who have lived through the harsh realities of addiction,” she said. “Through their own hard work, and with the help from communities and charities, such as The Forward Trust, lives are really being turned around.”

“… We can all play our part in helping this work,” she said. “By understanding, by listening, by connecting. So that together we can build a happier, healthier and more nurturing society.”