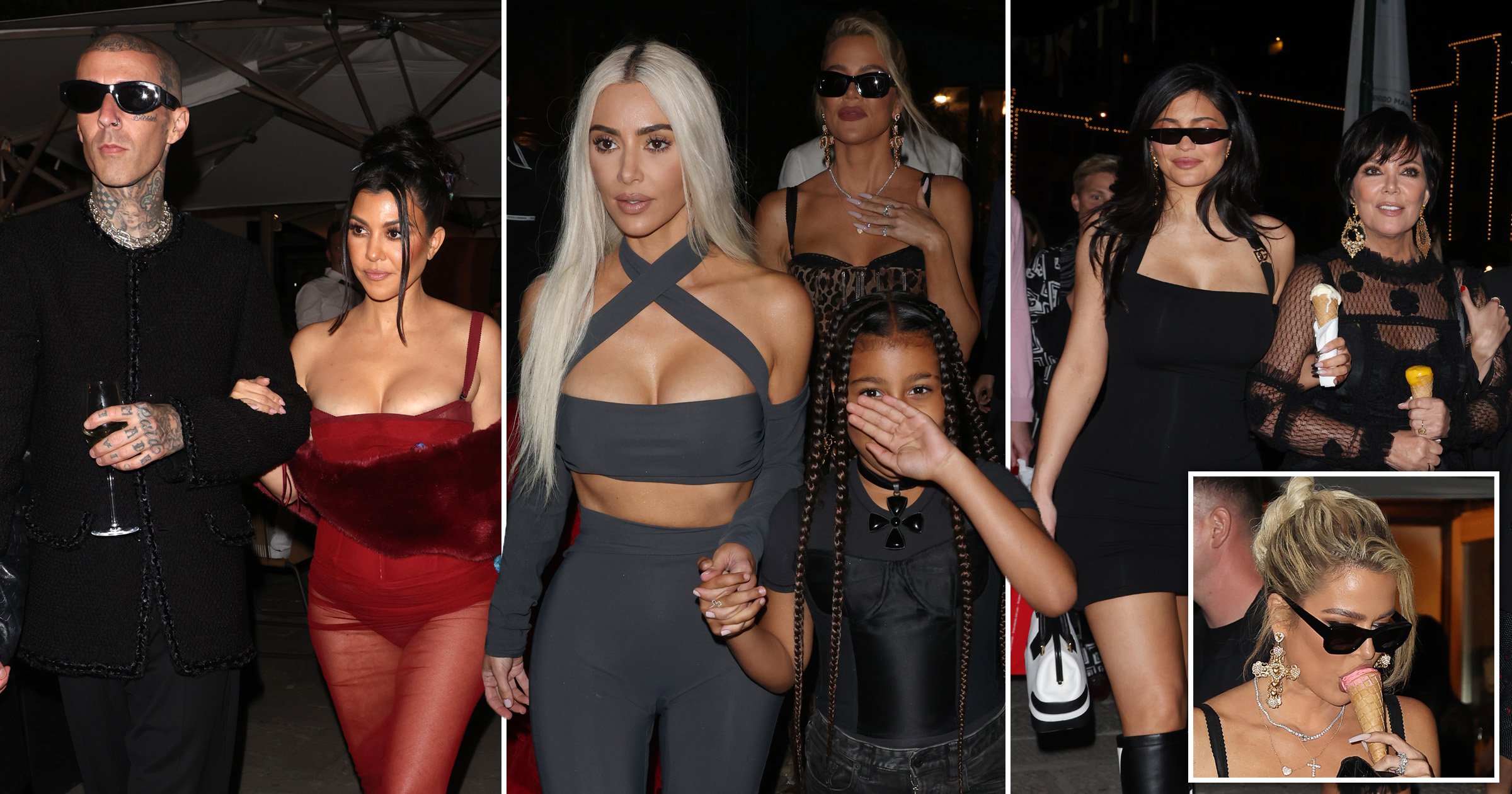 The Kardashian family are ready to celebrate Kourtney Kardashian and Travis Barker’s big day, as the couple prepare to say their ‘I dos’ – again – in a lavish ceremony held in Italy.

Less than a week ago, Kourtney, 43, and Travis, 46, officially tied the knot in a low-key do, becoming husband and wife in Santa Barbara.

Kourtney’s siblings, mother and children were nowhere to be seen – but they’re all back together again to raise the roof in Italy, where the pair are expected to wed in a castle.

On Friday, Kim Kardashian, Khloé Kardashian, Kylie Jenner and Kendall Jenner were all spotted out for dinner in Italy in the village of Portofino – and the vibes were immaculate.

With the reality stars all seemingly following a black dress code, Kendall, 26, arrived with her pro basketballer boyfriend Devin Booker, holding his hand while wearing a strapless black gown with a sheer skirt and a necklace with a huge red cross.

Kim, 41, was photographed with her eldest child, eight-year-old North West, holding her daughter’s hand as the youngster appeared to block her face from the cameras.

The Skims founder donned a crop top featuring a crossover halterneck, completing her look with high-waisted leggings that went all the way down to her heels.

She also appears to be happy keeping her blonde for now after dying her hair for the Met Gala, as she wore her long locks down for the evening.

At one point, she was captured looking at someone on an iPhone while holding another mobile device in her hand, as North made a funny face at the camera.

It looks like Khloé might have been the only one to buck the all-black trend, opting for a leopard-print dress instead while accessorising with bedazzled cross earrings and similarly dazzling rings.

The 37-year-old styled her hair in a messy updo, as she was spotted enjoying a classic Italian ice cream in a cone.

Kylie, 24 – who gave birth to her second child in February – oozed glamour as she walked coolly while holding a martini glass, as momager Kris, 66, leant on her arm.

At another point in the evening, Kris and her youngest daughter walked arm-in-arm while holding gelatos, Kylie wearing a black mini dress and black-and-white knee-length boots and her mum in a black netted number and strappy heels.

The pair let loose during the dinner, looking as though they might be dancing along to the music playing nearby.

Kourtney stood out amongst the guests, donning a striking, oxblood red sheer gown with matching heels.

Her beau Travis was on hand to help fix her dress, with the pair playfully canoodling while revelling in their wedding celebrations.

The rocker held his partner by the waist as she took a sip of champagne, while standing against a backdrop of boats on the water.

The couple sure do look like the epitome of love.