It’s hard to feel sorry for a woman who gets cheated on by Jesse James in the Year of Our Lord 2022. We mean, come on. You ain’t got the Internet?? Still, if this is true, it’s pretty awful. Because his new bride is also pregnant!

But this is particularly unforgivable as Bonnie says she’s over two months pregnant to boot! In a series of Instagram Stories on Wednesday she wrote:

“I’m 10 weeks pregnant I had to leave the house because we got into it the other night. He blocked me on everything. I see his page. He’s following his ex and a bunch of girls. I’m his pregnant wife and chooses to act like this. THAT’S NOT A MAN.”

She captioned a photo of her ultrasound:

“Jesse is busy trying to f**k other women while I’m pregnant.” 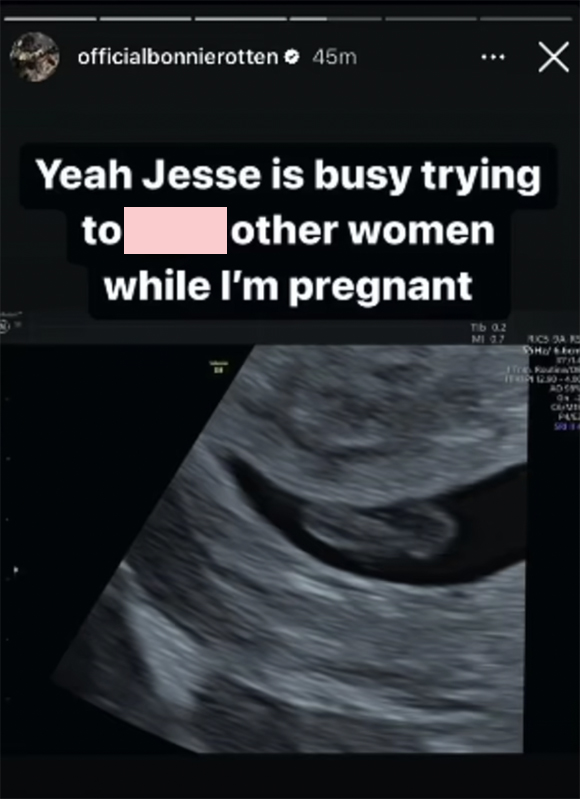 “I’m so hurt by everything he has done to me. He didn’t give a f**k about anyone but himself he’s truly a disgusting human being.”

Referencing his history of cheating, she finished:

“Everyone can laugh at me make fun of me whatever you say. Nothing will make me feel worse than how I truly feel right now.”

Bonnie finally agreed the haters were “all right” she “should’ve known better.”

“Jeeeezzzzz my private life suuuure is interesting… Tried and Convicted just like that… No smoking gun, No salacious texts, No other woman coming forward??? What the Hell??”

We mean… your wife’s accusations are enough, man. She’s the one who put them on social media for everyone to see. The well known Donald Trump supporter then made it racist, saying…

“Where’s my “Honky Privilege”? If this was an episode of Love & Hip Hop ATL I’d be dabbing it up at the club with Stevie J. And Lil’ Scrappy right now and nobody would say s**t…”

Why are we not shocked by this coming from a guy who hooked up with a literal Nazi?

However, it seems in just one day’s time Jesse changed his tune. He went from defensive and cynical to heartbroken. He literally BEGGED his wife to come back in a post on Friday, writing along with a carousel of wedding and other romantic photos:

He then apologized for calling her a slur when they got into a fight, saying:

“I know that just made you more mad, and didn’t do anything to make the situation better. It was out of line and childish and immature. I’m sorry I did that.”

As for the cheating? He continues to deny it, saying:

“What a man does”? He really wants praise for not hooking up with other women! Amazing. He did admit she was right about him talking to exes, however. He continued:

“Even though I said/did nothing inappropriate I was wrong for following and texting an ex after you left Monday night. I really thought we were done, and I was so mad and acted out of anger and spite. I know this hurt you and I’m sorry. I unfollowed her and won’t contact again. (Keeping it 100, I actually follow a different ex on IG, guess you forgot I told you about her )”

Don’t you love an apology that begins with “Even though I said/did nothing inappropriate”?

He then got downright sappy, and right there in front of everyone, writing:

“Alaina (Her real name)… I love you so much. I love our life together. I know you’re pregnant and I know you are having a rough time right now. I want to make things better and do everything possible to make your life the best. I want to be a positive and fix everything with us. So please know that I’ve learned from my past mistakes and I will do whatever it takes to make you happy, and gain your love and trust.”

He ended the message by saying:

“Please come home. I love you.”

What do ya think, Perezcious relationship experts? Will it work??