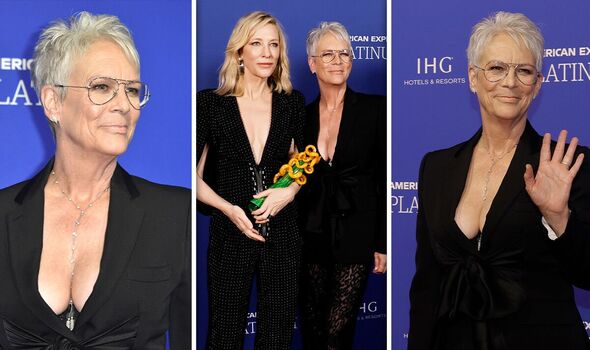 Jamie Lee Curtis, 64, looked incredible as she donned a plunging black blazer paired with sequinned trousers for the awards gala.

The Halloween star showcased her famous assets in a plunging black blazer worn over a black bra. She also amped up the glamour wearing sheer, sequinned trousers paired with black court heels.

Jamie arrived at the Hollywood event with fellow actress Cate Blanchett, who also looked sensational in a plunging black jumpsuit.

Jamie presented Cate with the Desert Palm Achievement Award for her performance in Tár.

While on stage, Cate joked that they almost missed the bash when Jamie came out wearing just her “bra and knickers”.

The Lord of the Rings actress laughed during her speech: “We had this lengthy conversation about whether I should get into pyjamas before driving back tonight.

“Meanwhile, she’s telling me this about what I should wear, and she comes out in her bra and knickers. This is why we nearly missed the tonight’s event!”

Jamie Lee Curtis posed up a storm on the red capet wearing a plunging black blazer which was tied at the waist.

Jamie Lee Curtis opted for a pair of sheer sequinned trousers and some black court shoes for her red carpet appearance.

Jamie Lee Curtis oozed confidence as she clutched a silver bag which matched her long necklace.

Jamie Lee Curtis wore her silver hair in her trademark short style and completed the look with glittering diamond earrings.

Cate Blanchett joked that Jamie Lee Curtis came out in just her “bra and knickers” before they drove to the 34th Annual Palm Springs International Film Awards.