I’m A Celebrity 2020: Ruthie Henshall reveals she had sex with ‘lovely bloke’ Prince Edward inside Buckingham Palace and sang for the Royals after getting ‘p****d on Martinis’

I’m A Celebrity’s Ruthie Henshall raised eyebrows as she opened up about her Buckingham Palace sex sessions with ex Prince Edward during Friday’s show.

The West End star, 53, dated the royal on and off for five years in the 1990s and reflected on their romance during a chat with fellow camper Shane Richie.

During the conversation, singer Ruthie also revealed she gave an intimate musical performance to the Royal family, after she got ‘p****d on martinis’ during a trip to Balmoral.

Revelations:  I’m A Celebrity’s Ruthie Henshall raised eyebrows as she opened up about her Buckingham Palace sex sessions with ex Prince Edward during Friday’s show

Speaking with Shane Richie, Ruthie boldly said: ‘You performed in Buckingham Palace, you sang in the gardens, I sh****d in the bedrooms.’

Clearly piping Shane’s interest, the two then settled into his hammock and Ruthie divulged some of her best tales from dating Prince Edward.

Ruthie then revealed that she had been to Windsor and Balmoral, the Queen’s estate in Scotland, with her ex – and even ended up performing for the family.

She said: ‘He invited me to Windsor for the weekend as we’re walking I’m seeing a table outside and there’s people sitting round it and I’m thinking that looks like the Queen and I remembered my dad had said to me that if you ever meet the Queen he said you curtsy and call her ma’am.

Past romance: The I’m A Celebrity contestant and performer, 53, dated Prince Edward on and off for five years in the 1990s (Prince Edward is pictured with his wife Sophie)

Enjoying the revelations, Shane then asked: ‘Did you know Diana much?’

Ruthie replied: ‘I met her a couple of times and one of my favourite times was we were at Balmoral, there was Diana, The Queen, Margaret, the Queen Mother, Charles, Edward, myself.’

She added that Diana was ‘lovely’, however she doesn’t ‘remember an awful lot because Charles gave me my first martini.’

‘I’d never tried it before so I was fairly… I had two of them and I was like woah…’, said Ruthie prompting Shane to tease: ‘Don’t tell me you go into show tunes’.

‘Let me tell you. Margaret she goes “yes, yes, oh sing us a song from that show you’re in” and I was in Les Mis at the time. So I sang I Dreamed A Dream and I must have changed key three times because I was so p****d on martinis.’

What a story: The performer spoke candidly about her time with the Royal family, with campmate Shane Richie covering his face at one point

Intrigued: Impressed Shane asked if Ruthie met Diana, Princess of Wales, before the singer revealed she didn’t remember her very well as Prince Charles had given her a martini

Ruthie also reflected on how she met Edward during the insightful conversation.

She said: ‘It’s funny, it’s such a long time ago.. [he’s a] Lovely bloke. And I genuinely fell in love with him.

Shane then asked: ‘There was a headline years ago wasn’t there? The prince and the showgirl. Where did you meet him?’

‘He was a production assistant at Andrew Lloyd Webber’s. And he then called me himself [Andrew] and he wanted me to play the lead in A Star Is Born. And Edward was my point of contact. 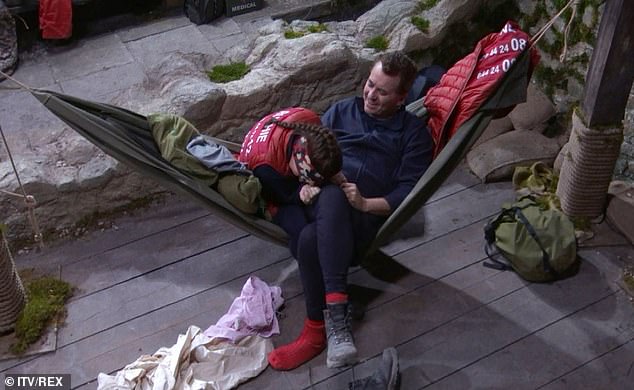 SO candid: Speaking with Shane Richie, Ruthie boldly said: ‘ You performed in Buckingham Palace, you sang in the gardens, I sh****d in the bedrooms’ 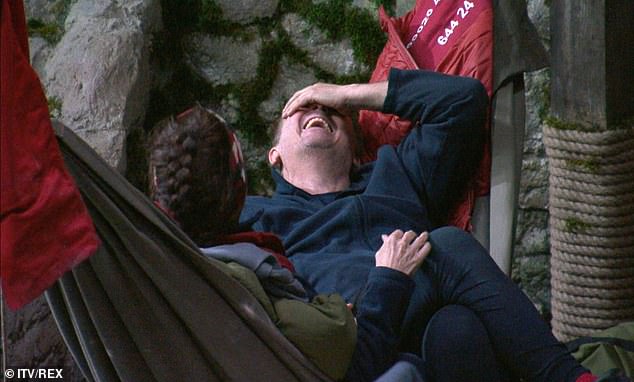 Loving it: Shane was all ears as he listened to the tales while lounging in his hammock

‘He was the one who’d call me up and say you’re rehearsing at 2 o’clock or whatever. And he said to me would you like to come to mine and watch the film of A Star Is Born with me and you can have some dinner. I was like what, at the Palace, is that where you live?’

Shane said: ‘Is that what he meant? God that is so weird. Watching A Star Is Born with Prince Edward.’ Later he joked ‘Her first date was to Buckingham Palace. Can you believe that? Blimey, my first date was Little Chef.’

Royal connections: Russell Watson revealed that he once stole a hanger from Windsor Castle

Actor Shane, who performed in musical Everybody’s Talking About Jamie last year, had shared that he did Buckingham Palace during the lockdown’.

‘It’s incredible, everyone asks did you, steal anything and I got some toilet roll but it was just a normal toilet roll. I was expecting it to have some royal seal on it or something,’ he joked.

Russell Watson added: ‘I nicked a coat hanger from Windsor Castle.’ ‘A coat hanger. I mean come on. You’d at least nick a crown.’

Ruthie dated Prince Edward on and off for five years and remains good friends with him, even attending his wedding to Sophie, Countess of Wessex. 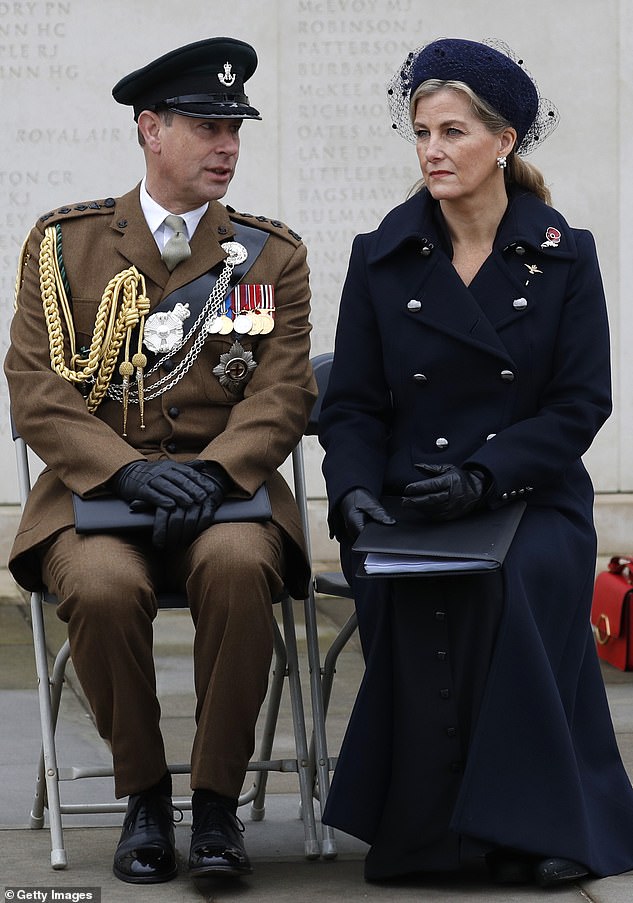 Former fling: Ruthie is still good friends with Prince Edward, even attending his wedding to Sophie, Countess of Wessex (couple pictured together on Armistice Day in November)