Ariana Biermann has undergone quite the transformation since she made her TV debut way back in 2008 during the first season of “The Real Housewives of Atlanta.” Kim Zolciak-Biermann’s daughter has blossomed in front of fans’ eyes and hasn’t been afraid to show off her new look over on her Instagram account.

Ariana’s changing looks have long been a topic of conversation for “RHOA” fans and viewers of the Biermann clan’s now canceled spinoff, “Don’t Be Tardy” – no more so than after Ariana first started showing off her dramatic weight loss on Instagram (via Bravo).

Kim also got candid about her daughter’s new look, telling Entertainment Tonight in February 2019 that Ariana had lost around 30 pounds and had “really kind of come into her own.”

Kim also shared how receiving negative comments on social media affected Ariana’s confidence. “People on Instagram, especially, are so f**king rude about it that I have to monitor her page constantly because of the nasty comments,” she said, noting that the initial body shaming comments then turned into people accusing Ariana of editing her photos. “It’s a constant battle, and I always want my girls to love themselves, no matter what size they are,” Kim added.

Ariana is now being forced to hit back on social media regarding her weight loss, just days after she opened up about the work she’s had done. Read on for what she’s saying now. 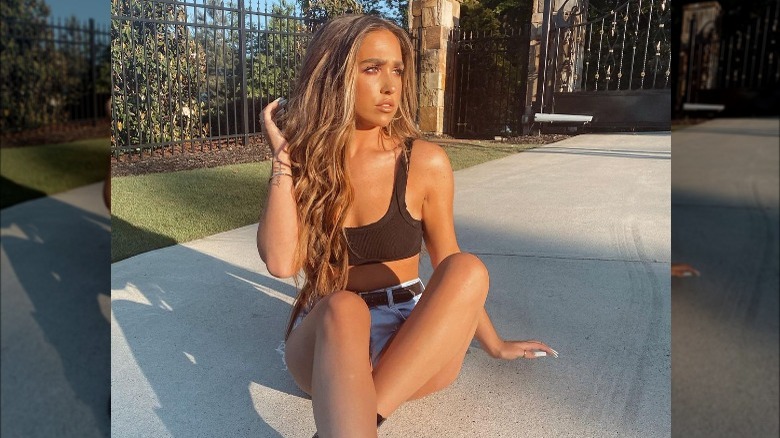 Ariana Biermann hit back on Instagram on July 9 after it was speculated her weight loss may have been the result of an eating disorder. “Please stop. I do not have an eating disorder. I worked my ass off to get to [where] I am today. I am not sick,” the “Dont Be Tardy” star wrote on her Instagram Story, calling all the speculation “ridiculous and awful” (via E! News).

As for how she actually dropped around 50 pounds, Ariana denied it happened “overnight” and explained she began “really working out” and “eating healthy” in January 2020 when she weighed 167 pounds. “I am now 118 over a year and a half later,” she wrote, adding that she started running three to five miles a day “with a waist trainer on in 90 degree weather,” which she described as “hell.”

The reality star and influencer also credited counting calories, cutting out snacks and soda, intermittent fasting, and hitting the gym more for contributing to her weight loss. “It was not easy. But it was the best thing I ever did for myself and my body,” she told fans, adding that she’s “so happy with [herself]” and has “never felt so beautiful.”

No matter what the number on the scale, there’s no doubting Ariana always looks beautiful.

If you are struggling with an eating disorder, or know someone who is, help is available. Visit the National Eating Disorders Association website or contact NEDA’s Live Helpline at 1-800-931-2237. You can also receive 24/7 Crisis Support via text (send NEDA to 741-741).