It’s been 27 years since we were first introduced to the Sanderson sisters and their spooky home of Salem, Massachusetts. And just as the witches returned after 300 years underground, it’s time for fans to return to the classic film once again. 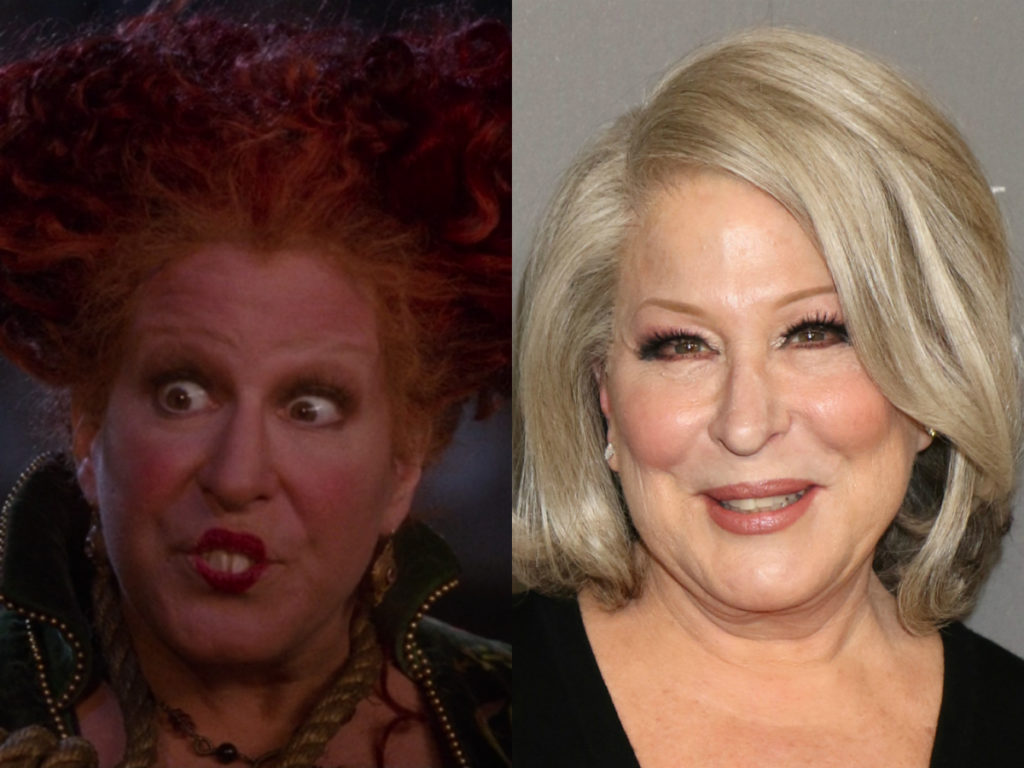 Though Bette Midler had a successful career as a musical artist and Broadway performer prior to her appearance in the cult classic, her leading role as Winifred Sanderson brought her talent to younger generations for their enjoyment.

Since starring in the flick, she has starred in other hit films such as The First Wives Club, and The Stepford Wives, as well as the Broadway revival of Hello, Dolly!, for which she received the Tony Award for Best Actress in a Musical. Oh, and because of her witchy popularity, Midler has hosted an annual ‘Hulaween’ costume party since 1995, benefiting the New York Restoration Project. 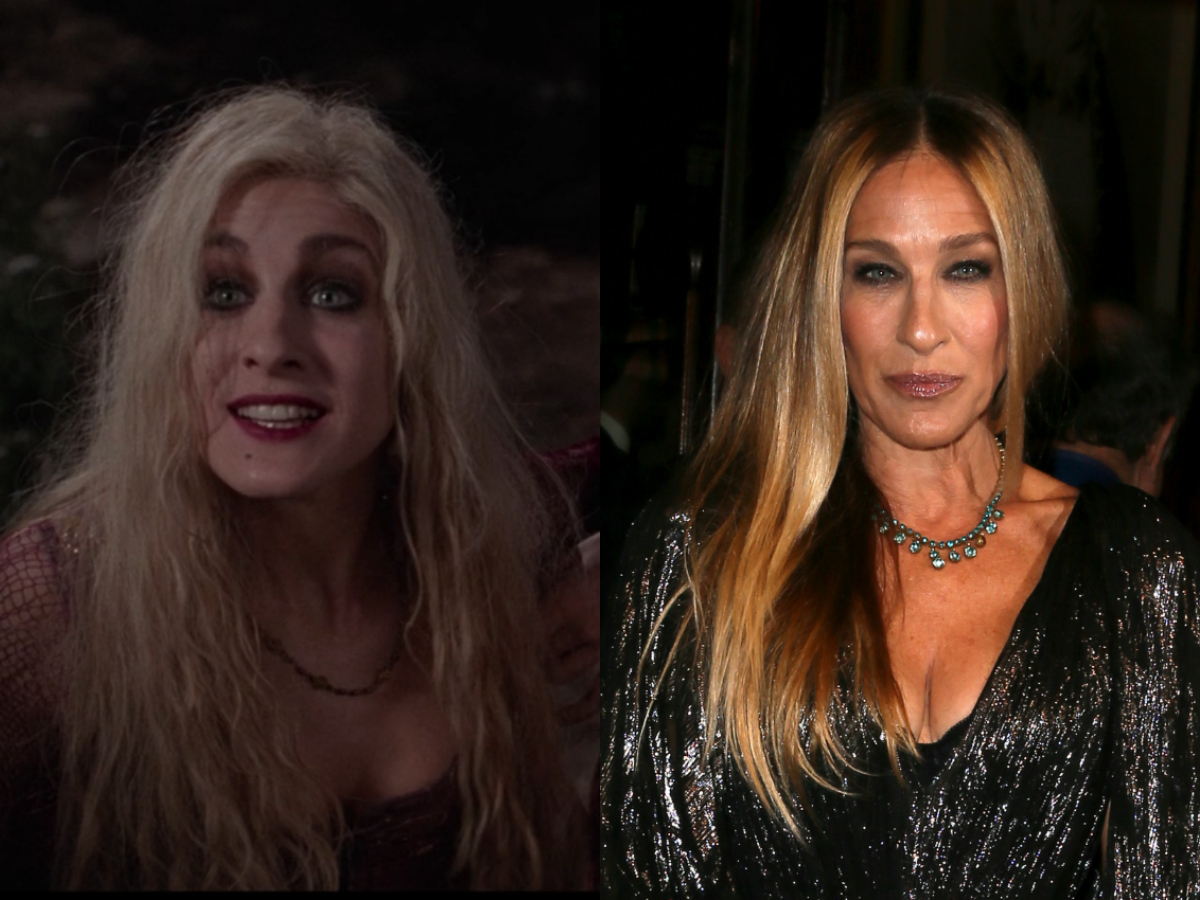 After making her first major film appearance in the 1984 hit Footloose, Sarah Jessica Parker took on her role of the same name in Hocus Pocus. After that, she achieved REAL stardom as Carrie Bradshaw in Sex and the City, a role she later reprised in the 2008 and 2010 films. SJP received three Screen Actors Guild Awards, four Golden Globe Awards, and two Emmy Awards for her performance.

In the spirit of her luxury shoe-loving character, SJP has ventured into the footwear industry, launching her namesake brand in 2014. Also like Bradshaw, she really does live in the Big Apple husband Matthew Broderick and their three children.

In 2016, Sarah returned to HBO for a very different relationship show, the post-marriage comedy Divorce, which ran until 2019. 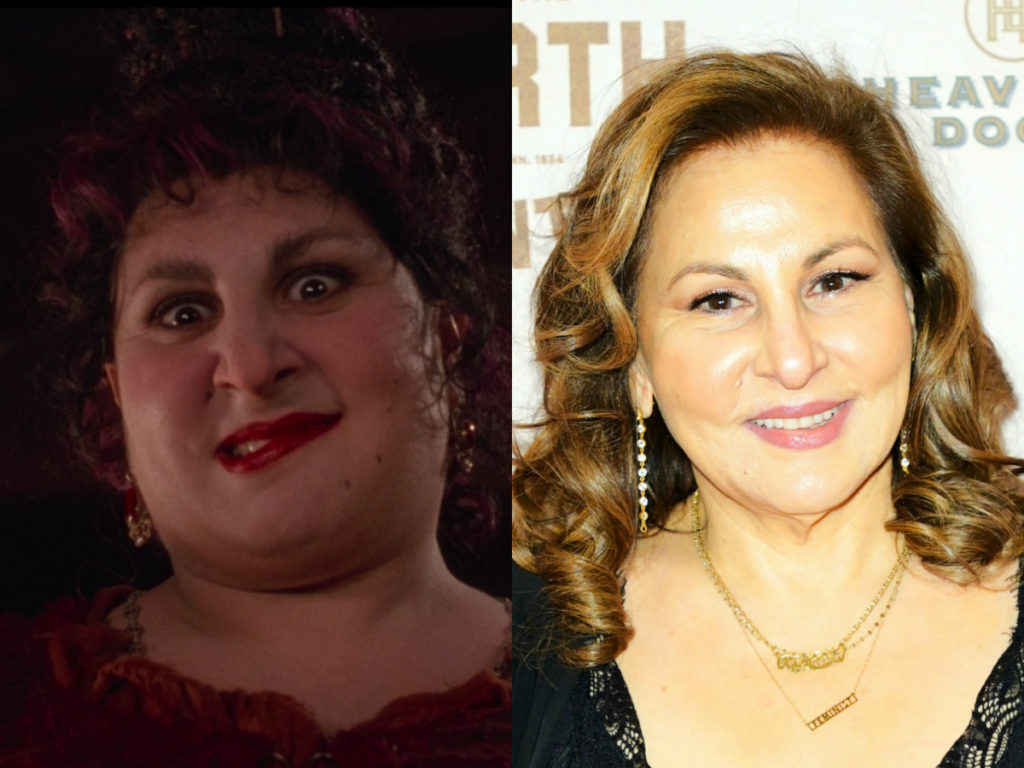 Just a year before she joined her on-screen sisters, Kathy Najimy starred in her first major role in Sister Act alongside Whoopi Goldberg, a role she later reprised in Sister Act 2. She went on to join the sitcom Veronica’s Closet in 1997 with Kirstie Alley, and voiced lead character Peggy Hill on the animated series King of the Hill from 1997 until 2010, among other roles.

Najimy has used her influence for good, working with organizations including Planned Parenthood and Time’s Up, advocating for women’s health and reproductive rights. She also created and produced the off-Broadway play Gloria: A Life about Gloria Steinem, who officiated her wedding to husband Dan Finnerty in 1998.

In recent years she has continued to use her amazing voice, acting in animated shows like Duncanville and The Rocketeer.

Oh, and when she does eventually return to the role of Mary Sanderson, she may not fill out the costume quite the same — she lost over 50 lbs a few years ago! 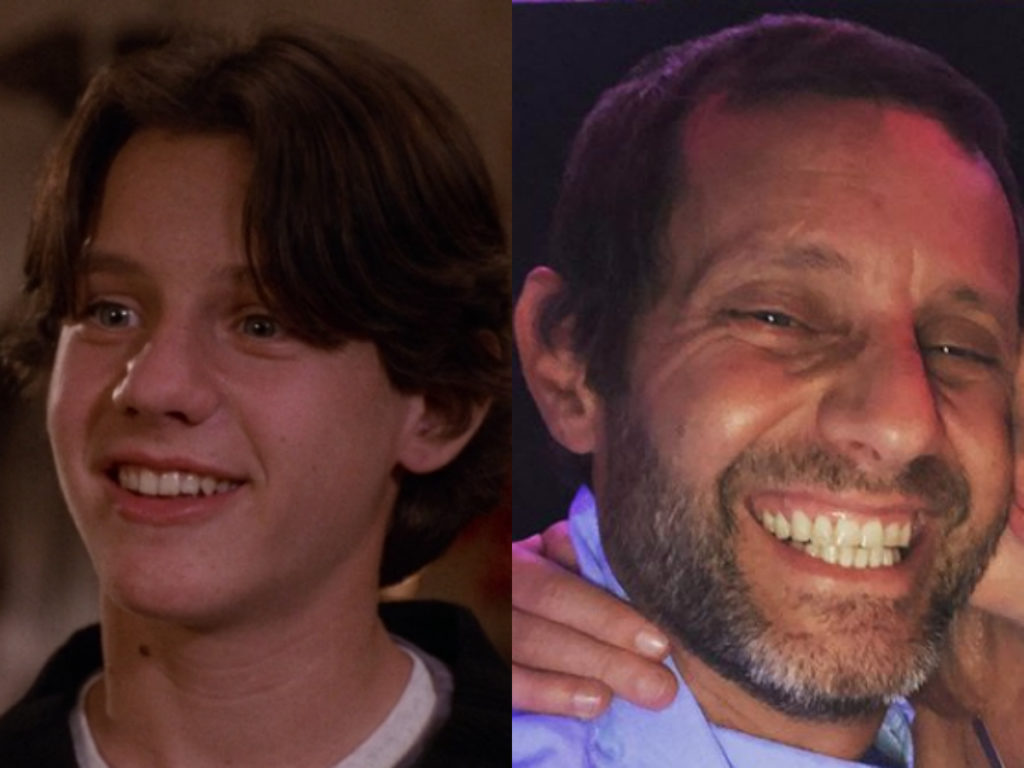 Omri Katz, who portrayed protagonist Max Dennison, has become somewhat of a mystery in recent years after retiring from the acting world in 2002. He was previously a main cast member on the prime time soap Dallas from 1983 until 1991 as John Ross Ewing III, but otherwise has had no notable work aside from a few film and television credits.

However, he did reunite with several co-stars from the movie just last year. Take a look:

The #hocuspocus crew is back together…AGAIN!!! THIS SATURDAY 10/5 8pm/7c join us and many others for the #31nightsofhalloweenfanfest on @freeform #themarydanksters 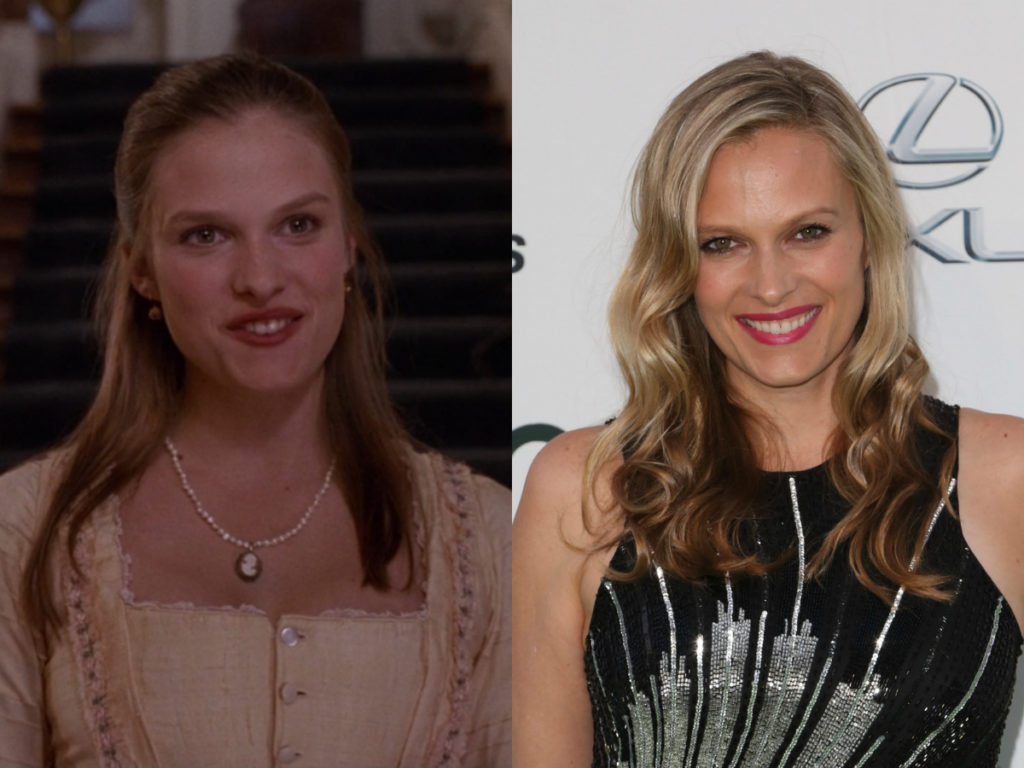 Though she made some minor TV and film appearances earlier, Hocus Pocus was undoubtedly Vinessa Shaw‘s big debut.

Following her lead role as Allison, Max’s love interest, she worked in TV for a bit before graduating to more adult fare, working with big directors like Stanley Kubrick and Steven Soderbergh. You may have seen her in Eyes Wide Shut, The Weight Of Water, Melinda and Melinda, or Side Effects — or possibly in less acclaimed work like 40 Days And 40 Nights. In 2014 she played the recurring role of Kate on the Showtime hit Ray Donovan.

After starring in a Halloween classic, Vinessa has always kept one foot in the horror world, starring in the 2006 The Hills Have Eyes remake, Siren, Clinical, and more. Next she’ll be seen in the trippy The Blazing World. 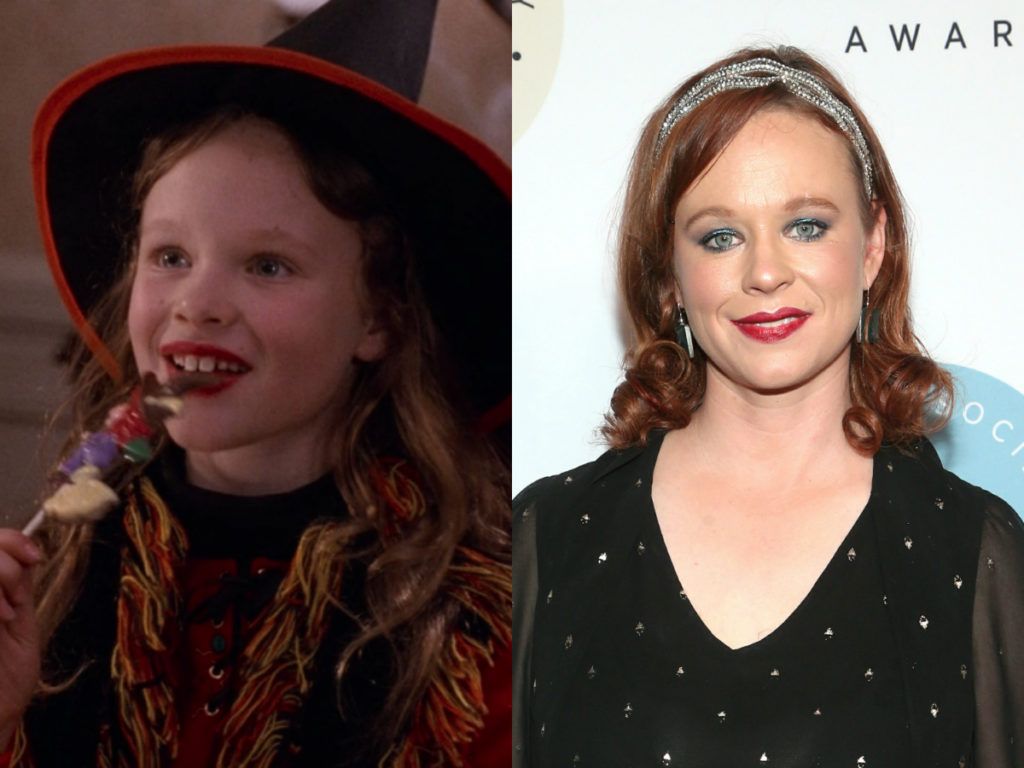 After Hocus Pocus, Thora Birch became one the biggest child stars of the ’90s in films like Monkey Trouble and Now and Then. In 1999 she made a splash in a very adult project, the Oscar-winning American Beauty, in which she played the daughter of Kevin Spacey and Annette Bening, earning a BAFTA nomination for Best Supporting Actress in the process. She then co-starred with Scarlett Johansson in the indie darling comic book adaptation Ghost World and seemed ready to transition into an adult movie star career…

But that didn’t happen. Instead she appeared in TV movies (she got an Emmy nomination for the title role in Homeless to Harvard: The Liz Murray Story in 2003) and in smaller roles in lesser known films. But as far as mainstream Hollywood was concerned, she just kind of disappeared.

What happened? Well, according to multiple reports her manager father was a nightmare to work with who refused to leave her side on set — and it ruined her career. Both of Birch’s parents, former adult film stars Jack Birch and Carol Connors, had worked as her business managers since she was a child — but had apparently grown more difficult over the years as Thora did more mature work.

In a story which even made the New York Times in 2010, the Dani Dennison portrayer was set to make her American stage debut in an off-Broadway revival of Dracula, but was fired when her father allegedly threatened a cast member physically.

Eventually, Birch took a break from acting but resumed her career in 2016, mainly starring in indie films; she was also briefly seen as Whisperer Mary in season 10 of The Walking Dead. 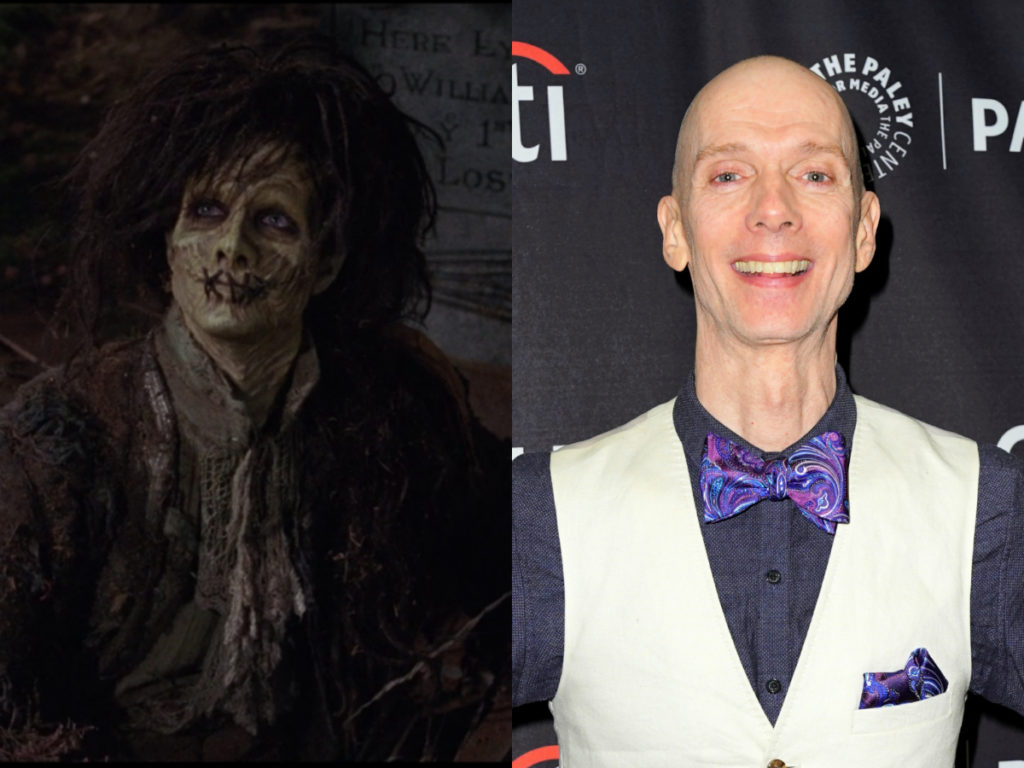 The Indiana native is not only an actor specializing in non-human roles, but also a contortionist and mime, most notably collaborating with filmmaker/director Guillermo del Toro for movies including Hellboy (he was Abe Sapien), Pan’s Labyrinth (he was the Faun AND The Pale Man), and The Shape Of Water (he was the hot fish guy!), all parts he had to wear heavy prosthetics for.

Most recently you can see him in a kinder gentler role — but with no less makeup — as Saru on Star Trek: Discovery! 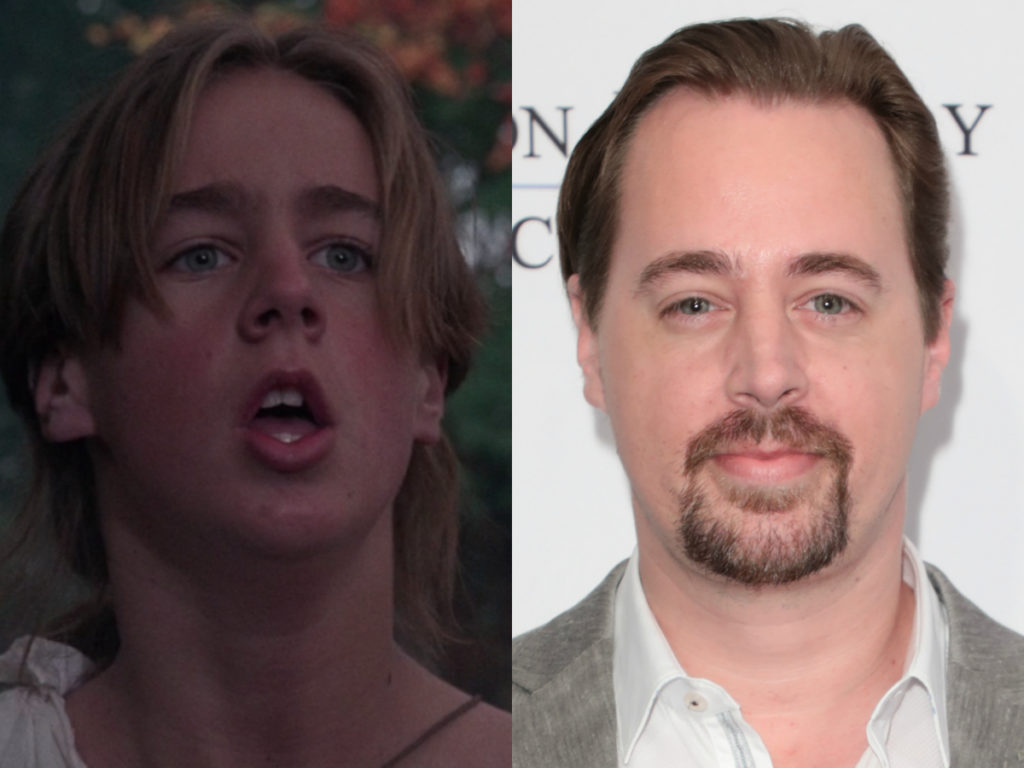 Though his face is only seen in a few scenes at the start and end of the movie, we couldn’t forget about Sean Murray, AKA Thackery Binx.

After this he did a lot of TV work in ER, Boston Public, and JAG. But he is actually best known these days for his starring role as Timothy McGee in the long-running series NCIS, which was created by his stepfather, TV legend Donald P. Bellisario. He’s been doing that for the past 17 YEARS! Wow!

Spoiler alert if you didn’t already know this, Murray does not actually voice the cat Thackery Binx, you have Jason Marsden to thank for that! The Rhode Island native has also lent his voiceover skills to roles in Spirited Away, Teen Titans, A Goofy Movie, and more.