Hank Azaria has been doing the work. In 2017, the 56-year-old white voice actor was publicly called out for voicing the character of Apu Nahasapeemapetilon (an Indian convenience store worker) on The Simpsons in a documentary titled The Problem With Apu.

Azaria later stepped down from voicing the part — one of many he lends his talents to on the popular series. Now, during the latest episode of the Armchair Expert podcast, co-hosts Dax Shepard and Monica Padman (who is Indian) spoke with Azaria about his reaction to the documentary and how he’s approached the controversy in the years since.

Azaria opened up to Shepard, a recovering addict, about his own journey with sobriety through Alcoholics Anonymous, saying that recovery helped him to respond to the situation with more care and tact.

He admitted that when he first heard about the backlash he had a “lot of defensive feelings,” but added that “my training as a recovering guy, when my feelings are at their peak, I need to shut up and to process those feelings and I need to listen and learn.”

Azaria added that had he not been sober, his response likely would have been very different.

“If I had not gotten sober in that time, and I was still a drunk guy, I promise you, I promise you, it wouldn’t have taken much wine — maybe a half a glass — for me to be in my feelings one night and fire off some kind of tweet I felt justified in firing off,” he admitted. “Some kind of defensive, white fragile tweet. Boy, am I glad I wasn’t.”

Azaria said it took him about two years to process and learn, saying he hesitated to make the decision quickly after voicing the iconic character since the late ’80s. 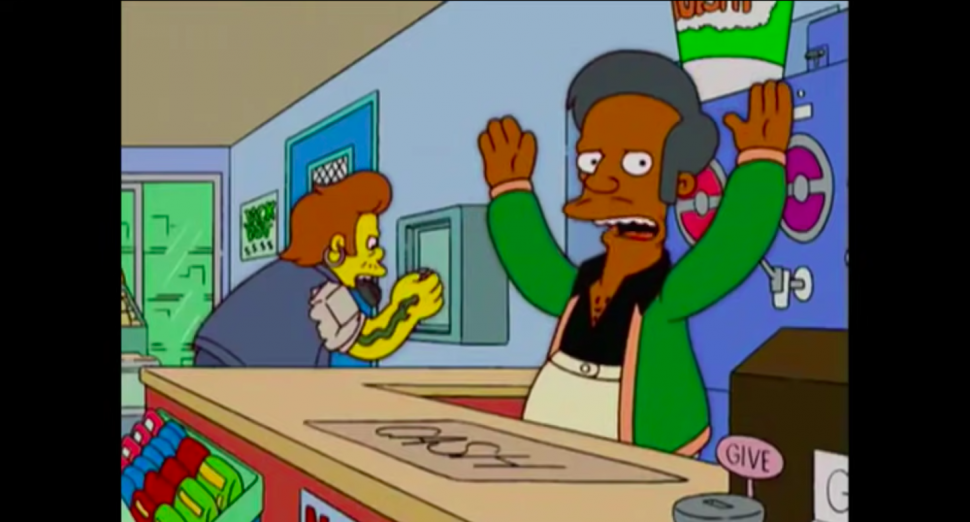 Azaria spoke about his part in “participating in racism,” saying for him it was about “blind spots.”

“I really didn’t know any better,” he said. “I didn’t think about it.”

Noting that he is not a big fan of the term “white privilege,” Azaria called his privilege “relative advantage.”

“I was unaware about how much relative advantage I’d received as a white kid from Queens,” he continued. “I didn’t think about this stuff because I never had to. There were very good intentions on all of our parts. We tried to do a funny, thoughtful character. Just because there were good intentions doesn’t mean there weren’t real negative consequences to the thing that I am accountable for.”

After co-host Padman shared her own experiences dealing with racism and gave her perspective on the situation, Azaria took the time to apologize to her as well, saying, “I really do apologize. I apologize for my part in creating that, in participating in that. Part of me feels like I need to go out to every single Indian person in this country and personally apologize.”