Halle Berry just crushed two viral Twitter trends at once by (lovingly) dunking on Keke Palmer herself with the ‘Baby, this is Keke Palmer’ meme.

This meme is officially too powerful. Halle Berry won the “baby, this is Keke Palmer” trend by responding to a tweet from Keke Palmer herself. The Hustlers star, 27, was trying to take part in an entirely different meme by posting a sepia photo of herself on Twitter, captioned “My granny was such a vibe in the 1940s.” Halle quote tweeted the actress and added, “Baby, that’s Keke Palmer.”

The tweet interaction is kind of a meme turducken, if you will. Keke was hopping on the current viral trend, in which Twitter users edit photos of current pop culture figures to look vintage. Like this guy, who posted Kim Kardashian losing her earring in the ocean during KUWTK and captioned it, “My great grandma being rescued after the titanic hit the iceberg 1912.” Or someone who captioned a photo of Anya Taylor-Joy in The Witch, “just found pictures of my great great grandmother and her family in 1916!”

First meme? Check. Now, onto Halle’s layer. The “baby, this is Keke Palmer” is a bit older, but it’s still golden. A Twitter user posted a photo of the actress from the 2006 Akeelah and the Bee press tour with an… inappropriate caption. Someone replied to the tweet with, “Excuse me ma’am, not to be disrespectful or rude but could you please take post down. That is my sister who was killed by a metra train. And it this post is very disrespectful. Idk who you are or if you even know her but I need you to take this down please.” 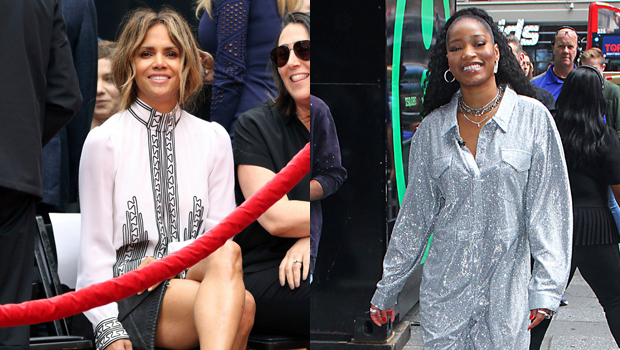 The OP told the commenter, “Baby, this is Keke Palmer.” And thus, a meme was born. Of course, the responses to the Oscar winner‘s tweet are almost all a version of the “metra train” message.