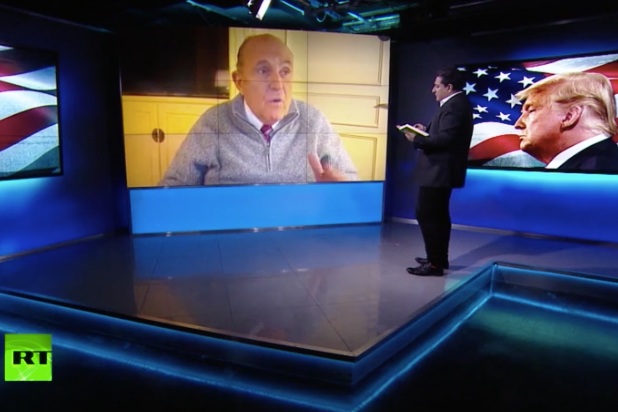 President Donald Trump’s lawyer chatted with the Russian state-owned news outlet “Going Underground” show for about half an hour on Election Day.

Giuliani was doing his usual routine of late, attacking Democratic nominee Joe Biden by attacking his son, Hunter Biden. At one point, he even held up his cell phone to show what he claimed was a photo of the former vice president’s son using drugs. RT blurred the screen.

When promoting the episode, the RT website labeled the talk with the former New York City mayor a “heated exchange.”

“The allegations made by Rudy Giuliani are his own opinions of the version of events and information before him. The interview contains a series of claims he has made in the US and alleges they were not reported by the media there. The reason being is that the claims are as yet unverified, disputed, subject to ongoing investigations and denied,” says the site.

Reporters were quick to point out that the office of the Director of National Intelligence has labeled RT as “a Kremlin-directed campaign to undermine faith in the US government and fuel political protest.”

Giuliani’s interview comes days Atlas issued a public apology for doing an interview with the outlet.

Atlas tweeted Sunday, “I recently did an interview with RT and was unaware they are a registered foreign agent. I regret doing the interview and apologize for allowing myself to be taken advantage of. I especially apologize to the national security community who is working hard to defend us.”