Emma Roberts’ baby is less of a ‘scream queen’ and more of an absolute dream! The actress shared the first look of her newborn’s face while catching up on her reading.

Although Emma Roberts‘ baby is less than a month old, that doesn’t mean he can’t start appreciating some of the finer selections of literature. Emma, 29, not only gave fans the first look at the face of her and Garrett Hedlund’s son, Rhodes, on Jan. 25 – she also showed that they’re bonding over a good book.  “Rhodes, meet Joan,” Emma captioned the Instagram photo, baby Rhodes in one hand, Joan Didion’s new Let Me Tell You What I Mean in the other. She also tagged Belletrist, her, and Karah Preiss’s book club.

The photo earned some love from Emma’s friends and fans. Nikki Reed left a trio of heart emojis in the comments, while visual artist Zoë Buckman dropped a pair of heart-eye emojis. “I just asked for this for my birthday,” added actress Ophelia Lovibond, meaning either the new Didion book or a photo of Emma with her baby. Cook and author Amanda Frederickson also added that “newborn cuddles are the best.” Judging by the look of pure joy on Emma’s face, the Scream Queens actress is likely to agree.

Emma and Garret, 36, reportedly welcomed their boy on Dec. 27, six months after the first reports of there being a bun in Emma’s oven. Emma and Garrett – a noted private couple – stayed mum for as long as they could, and whenever Emma was spotted out and about, her outfits obscured her belly. Ultimately, Emma confirmed the pregnancy in late August. “Me…and my two favorite guys,” Emma captioned an Instagram post, one that showed her cradling her growing baby bump. 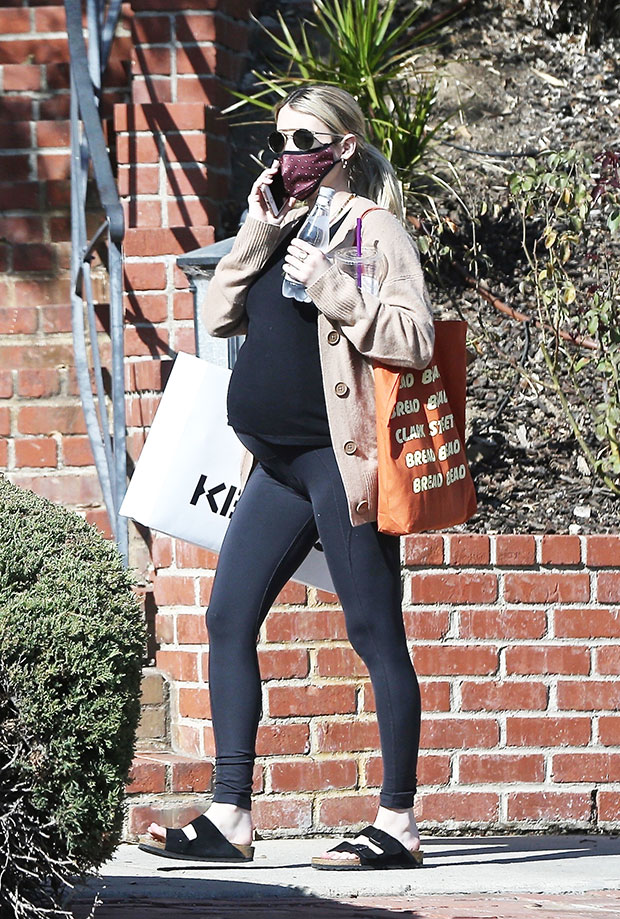 Since the cat was out of the bag, Emma decided to go all out with her pregnancy by appearing on the “Decembuary” cover of Cosmopolitan. The American Horror Story star wore a pink outfit that showed off her midriff, growing belly front and center. “To see my body change inside and out so drastically has been a wild experience. Surprising and beautiful,” she said. “Then again, some days I feel like I’m being hijacked by something,” she told the magazine.

A few weeks after becoming a mom, Emma shared the name she and Garrett had given their bundle of joy. “Thank you 2020 for getting one thing right,” she wrote on Jan. 12 while sharing a picture of her cuddling her baby. “Our bright light Rhodes Robert Hedlund.”