Fashion forward. Ed Sheeran defended his decision to wear jeans and a T-shirt next to a gown-clad Beyoncé during their first-ever performance of “Perfect.”

The British crooner, 27, surprised audience members by joining Bey on stage to sing their duet at the 2018 Global Citizen Festival in Johannesburg, South Africa, on Sunday, December 2. He wore a simple black tee layered on top of a long-sleeve white shirt and dark jeans as the “Halo” songstress, 37, rocked an over-the-top magenta dress. People quickly started making jokes about the musicians’ clashing appearances, with one fan tweeting, “Ed Sheeran is a 27 year old man the fact we’ve enabled him to feel it’s ok to dress like this at all, let alone next to Beyoncé really boils my piss.”

The conversation eventually became one about white male privilege and the differing standards for men and women in Hollywood. Sheeran didn’t take the comments to heart, however, and hilariously defended his comfortable wardrobe via Instagram Stories on Wednesday, December 5.

“Swipe up to ‘get the look,’ he wrote along with a picture of the HOAX tee. “#dresstoimpress”

He followed it up with a plug for the clothing brand. “Follow @hoax1994 for more of my amazing fashion choices,” he added. 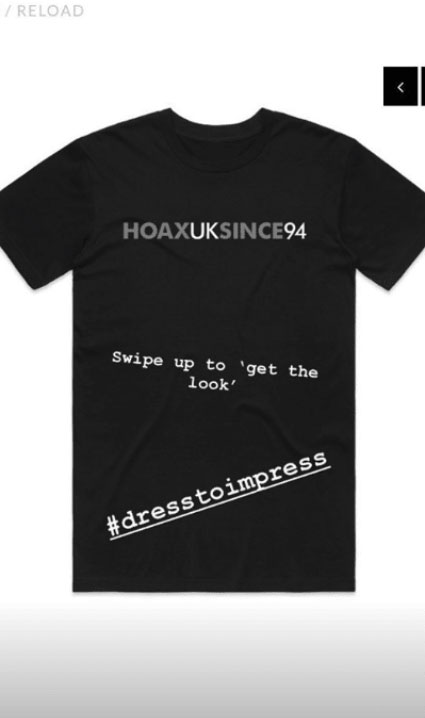 The British streetwear company also took to social media to address the controversy. “There’s no shame wearing a HOAX t-shirt! Reload T-shirt as worn by @teddysphotos back in stock for a limited time only, link in bio #DressToImpress,” they wrote via Instagram on Wednesday.

This wasn’t the first time Sheeran performed with Beyoncé wearing a less-than-fancy outfit, however. The pair sang an acoustic rendition of “Drunk in Love” at the Global Citizen Festival in New York City in September 2015 while the Brit was wearing jeans and a flannel button-up shirt and the former Destiny’s Child member was styled in a skin-tight bodysuit and thigh-high boots.

Sheeran got engaged to hometown sweetheart Cherry Seaborn in December 2017 and recently insinuated that they secretly tied the knot over the summer.

“I never really do anything too public anyway,” the four-time Grammy winner told Access host Scott Evans in August after playing it coy when discussing wedding plans.