The birthplace of Sir Winston Churchill, Blenheim Palace is so impressive that it was chosen as the venue of a lavish banquet when Donald Trump visited Britain as U.S. President.

Yet, astonishingly, a member of the family who owns the 187-room stately home has revealed it has become a source of embarrassment when Americans are invited to stay.

The Duke of Marlborough’s younger sister, Lady Henrietta Spencer-Churchill, has spoken of her sense of shame when visitors from across the Atlantic turn up their noses up at their outdated lodgings. 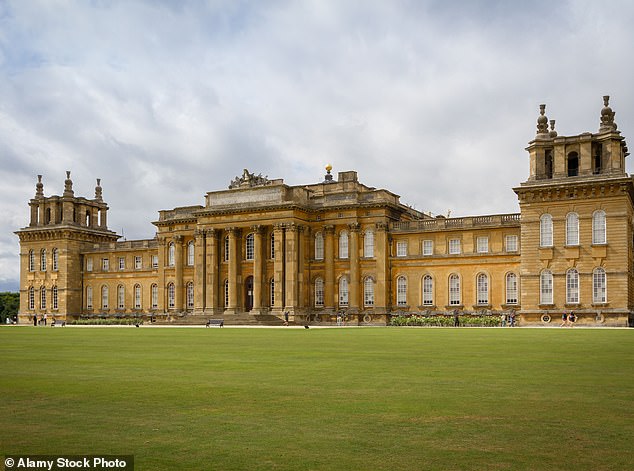 ‘On the private side, which is the East Wing, it’s always been lived in as a family home,’ says Lady Henrietta, founder of interior design company Woodstock Designs.

‘One thing I always find embarrassing is not having en suite bathrooms or even shower rooms.

‘Blenheim was not built to install plumbing. A lot of the floors and walls are solid — you can’t just plonk a bathroom somewhere. You’ve got to think about drain-runs and where everything goes.

‘So some people, especially the Americans, are horrified that they don’t get a bathroom en suite and they don’t have a power-shower.’

President Trump and his wife, Melania, visited the Palace on the first day of their British visit in 2018 and were welcomed by the then Prime Minister, Theresa May, for a 150-guest black-tie dinner — though they did not stay overnight. 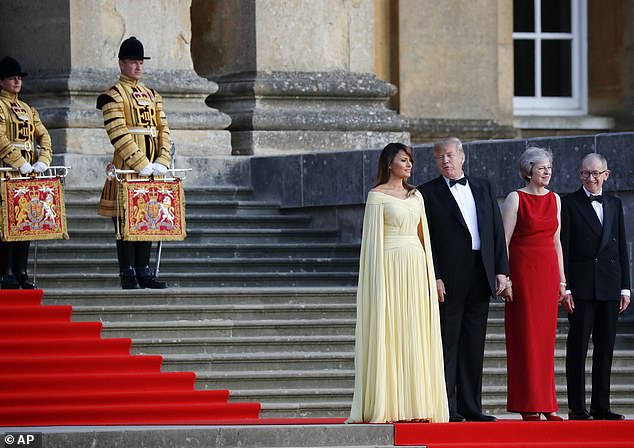 President Trump and his wife, Melania (pictured together with Theresa May and her husband Philip), visited the Palace on the first day of their British visit in 2018

Sprawling over seven acres, the Grade I-Listed property — designed by John Vanbrugh and Nicholas Hawksmoor in the early 18th century — is one of England’s largest houses and was designated a Unesco World Heritage Site in 1987.

Lady Henrietta, 62, author of Blenheim and the Churchill Family, made the comments on the Duchess of Rutland’s new podcast this week.

She adds of improvements at Blenheim: ‘We do things as and when we can. Although the rooms are large, they are cosy and very welcoming.

‘They’re not perfect by any means. They’re quite shabby-chic, a lot of the bedrooms, because we don’t have the spare money to spend on doing them up.’

When Rod served tea in bed

Some might think that life with a pop star is all sex, drugs and rock ‘n’ roll, but not with Sir Rod Stewart.

Guitarist Jim Cregan — who put Rod up at his home in California after the singer’s break-up with model Rachel Hunter — reveals: ‘He stayed for about four months at my house.

‘I don’t like getting up early in the morning but he does, so every so often there’d be a knock on the door and in would come Rod with a cup of tea.

‘And, as he laid it down on the bedside table, he’d give me a shove and say: ”I bet Elvis never did this!” ‘ 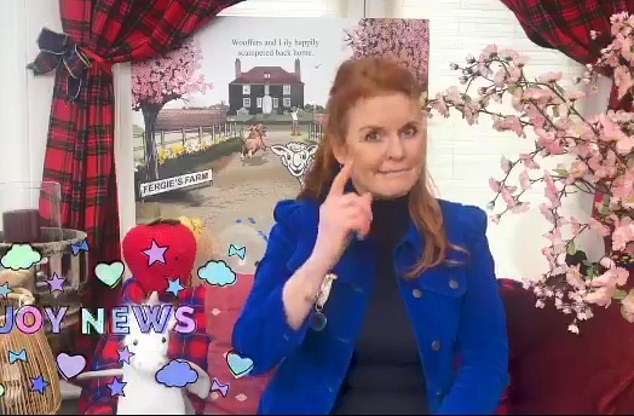 The Duchess of York is launching Little Red News, a show on her YouTube channel, that will report cheering stories from children

Amid the doom and gloom, the Duchess of York is determined to bring some sunshine.

Fergie is launching Little Red News, a show on her YouTube channel, that will report cheering stories from children to lift the spirits of others during the crisis.

Here’s a sneak preview of the first offering next Monday.

‘Welcome to joy news, the colours of the rainbow, the unicorns, the magic and the joy,’ Sarah tells viewers. ‘Everybody out there send in your joy news stories.’ 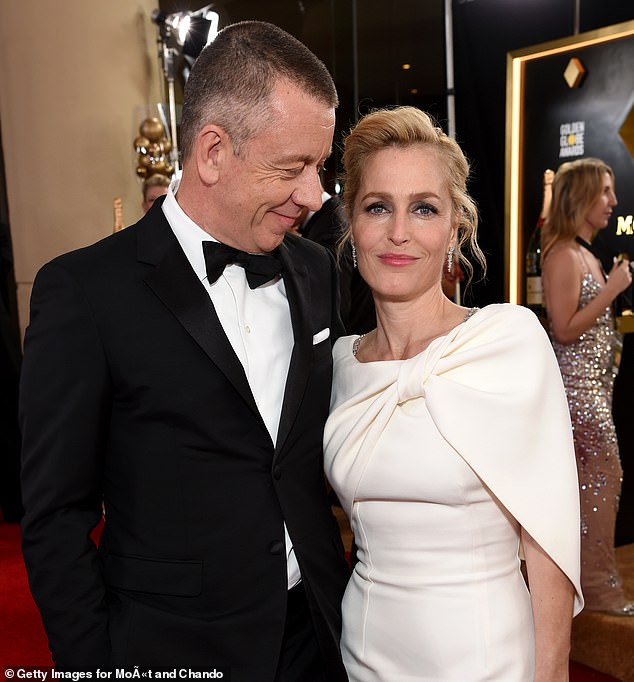 Gillian Anderson, 52, with Peter Morgan at the 77th Annual Golden Globe Awards in 2020

The Crown creator Peter Morgan might be a hard dog to keep on the porch, but his former long-term partner Gillian Anderson is keen to show she has one faithful friend at least.

Anderson, 52, who plays Margaret Thatcher in Morgan’s hit royal drama on Netflix, shared this photograph yesterday of her brown Labradoodle dog, Stella, resting between her legs.

She asked provocatively in the caption: ‘What more does a girl need?’ 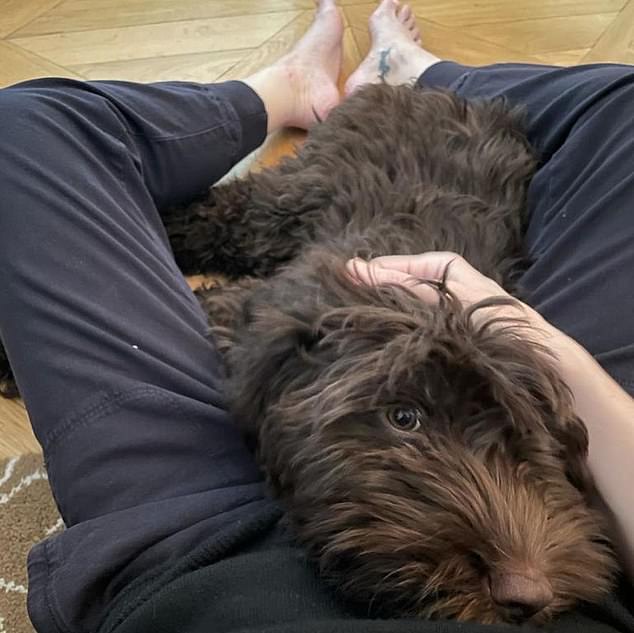 Anderson shared this photograph yesterday of her brown Labradoodle dog, Stella, resting between her legs

Many fans took this as Anderson’s witty response to claims that she had taken Morgan back after his month-long affair with film and TV producer Jemima Goldsmith.

This newspaper revealed on Tuesday that Morgan, 57, had split up with the 47-year-old daughter of late billionaire Sir James Goldsmith, amid rumours that he’d been reunited with Anderson.

He and The X-Files star had previously been courting for four years.

The truth is out there!

What do you do when you can’t go skiing?

After lockdown scuppered fashion designer Savannah Miller’s plans to head to the slopes with her wealthy boyfriend, Jim Whewell, to celebrate his 40th birthday, she came up with a themed-party at home to make him feel better.

‘We got all of our skiing gear on anyway and had a very creative, Covid-secure blast involving bicycles and multiple adventure,’ says the sister of actress Sienna Miller. 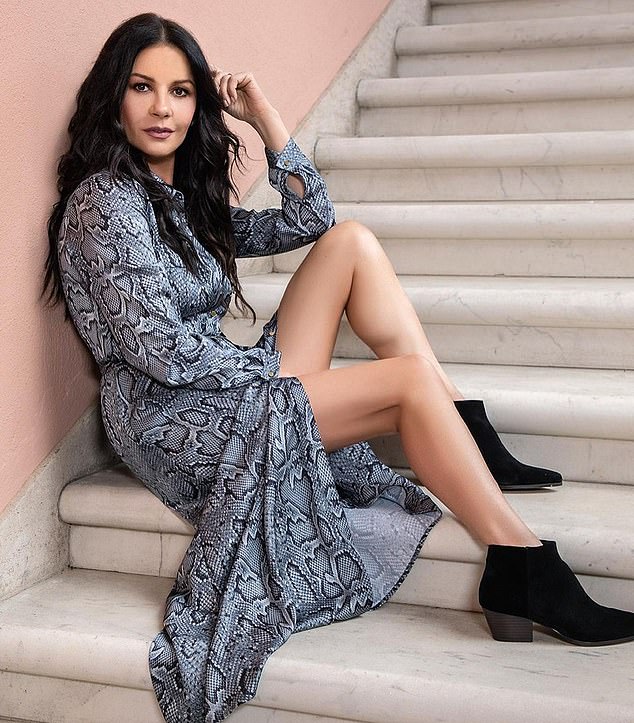 Once upon a time, Hollywood stars were happy if they kept winning leading roles. These days, they want to become ‘lifestyle brands’ as well.

Now, Catherine Zeta-Jones has launched her own designer clothing range.

The Swansea-born actress, who is married to fellow star Michael Douglas, gushes of the Casa Zeta-Jones label: ‘I created a collection that not only embodies my vision, but represents a real lifestyle that dresses women from morning to night, from every day to extraordinary.’

Heavens above! Comedian Frank Skinner, best known for his laddish humour during his Fantasy Football League days, has written A Comedian’s Prayer Book, to be published in the summer.

‘If there’s a place for comedy in life, there’s one for comedy in prayer, too,’ says Skinner, 64, who is a practising Roman Catholic. ‘Yet God is a tough audience, as far as audible response is concerned.’

Sheila Hancock admits she’s ’embarrassed’ to have been awarded a damehood in the New Year Honours list.

‘I thought I really don’t deserve it and I’m not the right type,’ says the widow of Inspector Morse star John Thaw.

‘There must be a lot of people thinking: ‘Oh, for heaven’s sake, it’s so embarrassing, these awful, working actresses being honoured.’ ‘

Though Sheila adds on Susannah Constantine’s podcast, My Wardrobe Malfunction, that the honour ‘opens doors’ for her charities: ‘If you put a Dame in front of it, it seems people are more willing to give you money.’